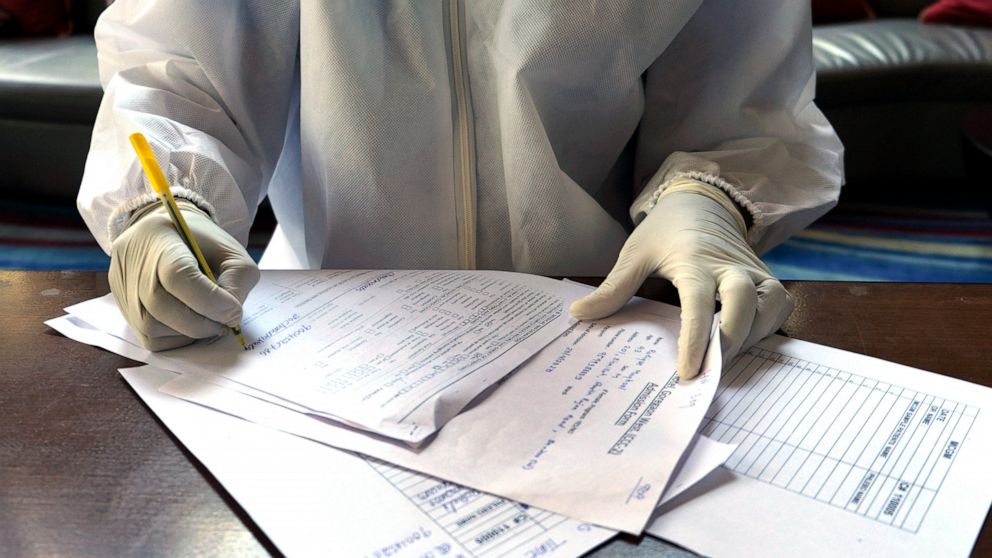 Rafiq Maqbool remembers never flinching while covering high-risk news assignments such as the war in Afghanistan, the Sri Lankan tsunami or the conflict in Kashmir, where he grew up and decided to become a photojournalist.

But a call on April 20 filled him with a dread he had never felt before. The caller told the 43-year-old Associated Press photographer that he had tested positive for the coronavirus.

India has reported more than 30,000 confirmed coronavirus cases and over 1,000 deaths. Since March 24, its 1.3 billion people have been living under one of the worlds strictest stay-at-home orders, forced to remain indoors except to buy food and other necessities. Essential workers including hospital staff, pharmacists, grocers and journalists are exempt.

At the urging of health authorities, more than 160 journalists were tested for the virus in Mumbai on April 18. Fifty-three tested positive, including many who were asymptomatic. Maqbool was one of them.

When Maqbool learned of the results, he cut short an assignment and drove home. Fear and despair gripped his mind.

Maqbool was placed in quarantine in a hotel along with 40 other journalists, with the remainder quarantined elsewhere. The staff would ring his room’s doorbell, put food outside and leave. Every morning there would be phone calls from the nurse or doctor on duty to check his health.

He spent hours looking out the window at birds flocking on a tree outside. The scene brought him comfort.

But 15 kilometers (9 miles) away, Maqbools wife was feeling increasingly strained.

The children demanded to know where their father was. Neighbors had to be assured everything was fine. Authorities sealed his apartment building.

Maqbool turned to prayer, which helped him feel better.

Over the next few days, a chat group formed by the hotel residents became his second family where other journalists talked about their experiences.

It was our little ghetto in the time of the coronavirus, he said.

He would also spend time taking pictures, his camera clicking images that would form this photo gallery.

On day 5, he and the other hotel residents were tested again. When the results come back two days later, Maqbool and his colleagues were found to be negative for the virus.

Later that day, on April 27, he was reunited with his family.

Johnny Depp is back in the witness box for a third day at the trial of his libel suit against a tabloid newspaper that called him a “wife-beater.”
Read more

The new building will replace the existing colonial-era structure and will be completed by 2022.
Read more

Texas in Crosshairs of ‘Strengthening’ Tropical Storm Beta Which...

Tropical Storm Beta is the 10th named Atlantic storm to bear down on the Gulf so far this September.
Read more

Schools ‘must come before pubs and restaurants in future’

England's children's commissioner says the fundamental right to an education should be prioritised ahead of pubs.
Read more

Funds to help Black-owned businesses have launched in the U.S. since the pandemic began closing businesses and schools.
Read more

House Democrats introduced legislation on Monday to keep the federal government funded through Dec. 11, but don't have a deal in hand with Republicans and the White House to avert a shutdown at the end of this...
Read more

The U.S. hit the grim milestone for the first time in two months.
Read more

coronavirus infections spread across our country from people coming in close contact, we must be more concerned about personal health than political choice.
Read more

Warren Buffett’s company has bought $2.1 billion of Bank of America stock over the past three weeks after the latest purchases of $340 million of shares
Read more

Progressives crowed Wednesday after a number of their candidates scored pivotal wins in Tuesday's primaries, pushing back against the notion that the party's left flank faces barriers to electability.Cori Bush, a c...
Read more

A longtime climate change skeptic has been appointed by the Trump administration to help run the federal agency charged with producing "much of the climate research funded" by the government, The Washington Post reported Sunday.
Read more

Opinion | How to Crisis-Proof Our Food System

The pandemic has exposed the weaknesses of a nationalized and inequitable food system.
Read more

It is time to immunize our presidential election system from the results of accidental or intentional events deciding the presidency.
Read more

Cuomo to protesters: “Act as if you may have...

New York Governor Andrew Cuomo said Thursday that people in New York City who are protesting George Floyd's death should assume they've been exposed to the coronavirus in the crowd. He urged them to get tested and also warned it may trigger a spike in COVID-1…
Read more

How to host a socially distant summer party

With restrictions easing across the country, many people are looking at outside gatherings like barbecues and picnics to reconnect with friends and family....
Read more

Frustrated with a lack of progress in Brexit talks, Prime Minister Boris Johnson introduced his own legislation to solve the Irish border question.
Read more

"If anyone is arrested, I ask that it only be me," Musk tweeted.
Read more

“I've been told many times since June that I could get called back ‘any day now,’" said one furloughed worker. “My entire life is on hold and I have to remain available."
Read more

It would damage the country, and those who say yes bear some blame for the president’s rise.
Read more

Mayors call on Congress to investigate use of federal...

NBC News’ Erin Mclaughlin details the fallout from the use of federal officers in Portland, Ore., as a group of mayors call on Congress to investigate.
Read more

US cuts remaining dues payment to WHO after Trump...

China silent amid global calls to give Africa debt relief