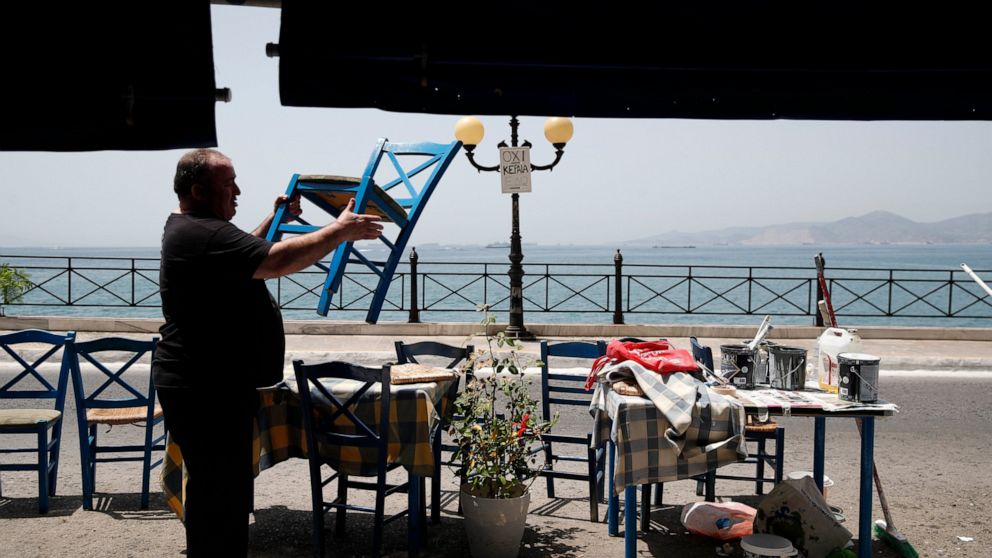 Speaking Wednesday in a televised address to the nation, Mitsotakis said visitors would be subject to sample coronavirus testing and our general health protocols will be adhered to, without them, however, overshadowing our bright sun or the natural beauties of Greece.

Mitsotakis noted Greece has managed to restrict the spread of the virus. … We made our country an example to follow in the handling of the health crisis.

Mitsotakis government imposed a lockdown very early in Greeces outbreak, which has been credited with keeping the number of deaths and critically ill people at very low levels. On Wednesday, health authorities announced one new death and 10 new confirmed coronavirus cases, bringing the total number of dead to 166 and the total confirmed cases to 2,850 in the country of nearly 11 million people.

But the lockdown has dealt a severe blow to Greeces economy, which has barely emerged from a brutal decade-long financial crisis that saw a quarter of gross domestic product wiped out. Tourism is a vital part of the economy, contributing more than 10% of GDP, and authorities have been anxious to ensure the entire summer season isnt lost.

Let us face reality with courage: April and May was the nadir of tourism, Mitsotakis said. So whatever we achieve this year will be a profit.

Mitsotakis announced a reduction in consumer taxes on transport from 24% to 13% for five months, which will lead to cheaper boat, plane and bus tickets during the tourist season, as well as a cut on tax on coffee, soft drinks and open-air movie theater tickets.

The government’s priority, he stressed, was on maintaining jobs and helping the sector’s professionals prepare for their big comeback in 2021.

Derek Gatopoulos contributed to this report.

The Hill’s Campaign Report: Primary night in Kentucky and...

Welcome to The Hill’s Campaign Report, your daily rundown on all the latest news in the 2020 presidential, Senate and House races. Did someone forward this to you? Click here to subscribe.We’re Julia Manchester, Max Greenwood and Jonathan Easley....
Read more

Trans youths who get gender-affirming care earlier in life are less likely to face issues like depression and anxiety, a study published in Pediatrics found.
Read more

As tensions escalated between police and protestors throughout the nation, some members of law enforcement showed solidarity with demonstrators by kneeling alongside them and participating in marches over the weekend....
Read more

New rules for parts of NI, including Belfast and Ballymena, are "dissatisfying" and "need clarity".
Read more

President Donald Trump once again defended his cognitive abilities in an interview on Wednesday by pointing -- unprompted -- to a test he took in 2018 that is designed to rule out mild cognitive impairment.
Read more

When they found the lost console, officers used the game to send a message to the owner's friends.
Read more

Overnight Defense: Critics continue to swipe at Trump over...

Happy Friday and welcome to Overnight Defense. I'm Ellen Mitchell, and here's your nightly guide to the latest developments at the Pentagon, on Capitol Hill and beyond. CLICK HERE to subscribe to the newsletter.
Read more

Why I’m sending my son to summer camp

Parents are facing impossible decisions amid the Covid-19 pandemic. Rebecca Bodenheimer says that despite fears of judgment or disapproval, she has carefully weighed her son's risk (and the risks posed to others) and is sending him to summer camp -- for his o…
Read more

Roger Montoya, a Democratic candidate in an open New Mexico House race, has acknowledged his participation in two adult films in the 1980s as a college student.
Read more

Pennsylvania Attorney General Josh Shapiro (D) on Friday joked that he would be taking his son’s phone away after he accidentally walked in on Shapiro’s MSNBC interview on the Trump campaign’s efforts to halt absentee ballot counting in the state.
Read more

Conductor Andris Nelsons has reached agreement on contract extensions with both the Boston Symphony Orchestra and the Gewandhausorchester of Leipzig, Germany
Read more

Meghan Markle lawsuit against newspaper to be delayed until...

A British judge ruled in favor of delaying a trial for the invasion of privacy lawsuit that Meghan Markle and her husband Prince Harry filed against a British tabloid in early October, ...
Read more

"This is the oldest, most obvious, least original anti-Semitic trope in history. Senator, literally no one believes your excuses," candidate Jon Ossoff said in response.
Read more

Nominated actors will have someone waiting outside their home to hand over an award if they win.
Read more

The top immunologist's comments come the week that Donald Trump said people need not be afraid of COVID-19.
Read more

The rare collaboration between arch rivals Intel and AMD on the Kaby Lake-G processors seems to have ended with drivers no longer being provided by Team Red.
Read more

Gorilla Glass Victus Will Be a Lot More Scratch-Proof

The new smartphone glass is the first significant improvement in scratch prevention from Corning's team in seven years.
Read more

The Fox News host took issue with a number of businesses who have made donations to groups such as Black Lives Matter.
Read more

See Elba’s message after getting virus

Actor Idris Elba announced in a Twitter post that he has tested positive for COVID-19.
Read more

As social media stars turn rented Los Angeles mansions into content-generating “collab houses,” neighbors are getting fed up — and the city is cracking down.
Read more

Ashley Diamon is suing the Georgia Department of Corrections for failing to protect her from sexual assault.
Read more

Cohen went back to prison because he was “defiant”,...

"Petitioner was remanded to FCI Otisville because of his defiant behavior during his meeting at the Probation Office on July 9, 2020," the government said.
Read more

"I am hoping to honor his legacy by pushing for a 21st century Voting Rights Act. I'm trying to have a lot of very critical conversations about race and representation in Texas,"
Read more

Kevin Na made history at the Masters during the first round Thursday night.
Read more

6 summer drink recipes to help you beat the...

On hot summer days, there's nothing like a cold drink to keep us alert and hydrated. Here are six thirst-quenching summer beverage recipes that will keep you hydrated and healthy this summer.
Read more

Arbery's mother has said that she doesn't approve of charitable organizations using her son's name or likeness without her approval.
Read more

Good morning and welcome to Fox News First. Here's what you need to know as you start your day ... China harboring fugitive military-linked...
Read more

Where Biden and AOC’s Policies on Climate Change, Immigration...

AOC, who endorsed Senator Bernie Sanders in the primary, pledged to support the Democratic nominee and committed to voting for Biden.
Read more

Iran has moved a mock aircraft carrier to the strategic Strait of Hormuz amid heightened tensions between Tehran and the U.S., satellite photographs show.
Read more