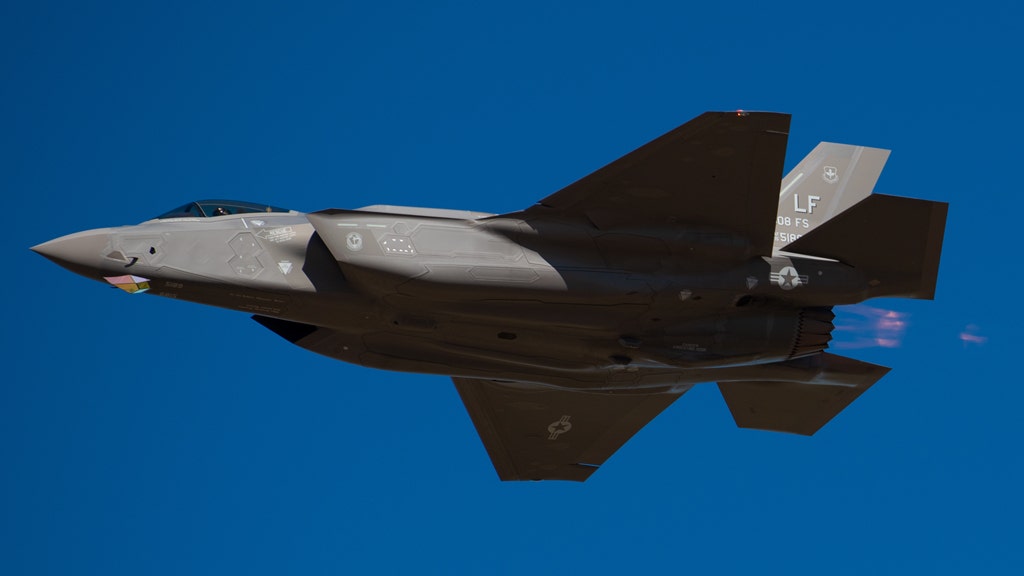 A fifth-generation F-35 stealth fighter jet has crashed at a Florida base on the Panhandle, just days after an F-22 jet succumbed to the same fate.

The Air Force said the F-35A Lightning II, which costs an estimated $90 million, crashed while landing at Eglin Air Force Base outside Destin at 9.30 p.m. on Tuesday night. It was assigned to the 58th Fighter Squadron.

The pilot ejected and was taken to a local hospital and is in stable condition.

On Friday, an F-22 fighter jet crashed 12 miles from the base during a routine training flight. The pilot also ejected successfully.

A tweet from Eglin Air Force Base said: “At the time of the accident, the pilot was participating in a routine night training sortie.

The F-35A Lightning II, which costs an estimated $90 million, crashed while landing at Eglin Air Force Base outside Destin at 9.30 p.m. on Tuesday night

“First responders from the 96th Test Wing are on the scene and the site is secured. The accident is under investigation. There was no loss of life or damage to civilian.”

The F-35A Lightning II is a single-seat, single-engine fighter aircraft made by Lockheed Martin Corp. Before the crash, only two F-35s had been lost in accidents, according to The Aviationist.

Vince Carter is retiring from the NBA after 22...

After 22 seasons in the NBA, Vince Carter is hanging up his threads and calling it a career. The 43-year-old announced that he is "officially done playing basketball professionally" on his podcast "Winging It With Vince Carter."
Read more

Jobless claims up for first time in months as...

How to See Comet Neowise Before It’s Gone

The comet will make its closest approach to Earth on Thursday before it fades into black. Here's how you can catch a glimpse.
Read more

Magnus Carlsen: ‘My emotions are usually outside my body...

Greatness cannot be achieved without sacrifice. While it is the fire that burns inside that fuels the brilliance, the pursuit for perfection can also torment, turning relationships to ashes and niggling at the soul. The gifted can be loved and disliked. They …
Read more

The recalled salad is contaminated with cyclospora​, a parasite that can cause diarrhea, stomach cramps, nausea, and fatigue.
Read more

You are never going to believe what Devin Nunes...

Devin Nunes is at it again. Again.
Read more

A selection of the week's best photos from across the continent and beyond.
Read more

Why Are These Sea Urchins Sporting Cowboy and Viking...

An aquarium owner noticed his sea urchins covering themselves with rocks and other objects, so he started 3D printing goofy hats. But a marine biologist confirms that sea urchins are making more than fashion statements.
Read more

HBO to adapt Ta-Nehisi Coates’ ‘Between the World and...

A stage production of Ta-Nehisi Coates’ “Between the World and Me,” his prize winning book about racism and police violence, is being adapted by HBO for a special this fall
Read more

We are Republicans and Democrats. Vote By Mail Is...

Voters should not have to choose between their health and participating in democracy.
Read more

Joe Biden is the Only Candidate Fit to Contest...

Biden played a central role in bringing about the Iran nuclear deal, and assembling the multi-national coalition against ISIS. He won't need on-the-job training to rebuild from the diplomatic wreckage of the Trump era.
Read more

China says “malicious slander" is behind an order by the U.S. government to close its consulate in Houston, Texas, and maintains that its officials have never operated outside ordinary diplomatic norms
Read more

For the first time in 30 years, Walmart will...

“We know this has been a trying year, and our associates have stepped up. We hope they will enjoy a special Thanksgiving Day at home with their loved ones,” Walmart said.
Read more

House Democrats push for resuming aid to Palestinians in...

House Democrats on Thursday advanced an amendment that would restore millions of dollars in aid to Palestinians cut by the Trump administration two years earlier, as part of a multi-billion dollar spending bill under consideration.
Read more

Tech chiefs press cloud suppliers for consistency on security data. Cloud providers are coming under pressure from some of their biggest customers to adhere to one across-the-board standard of information on how they handle client data and cybersecurity. Amo…
Read more

A Zimbabwean journalist who has been held in prison for more than a month has been denied bail for the third time, while police continue arresting government critics
Read more

Jennifer Lopez put some hard work in the gym this week -- but not without a photoshoot.
Read more

The controversy involves Pompeo's decision to use his emergency authorities to approve the sale of military equipment worth $8 billion.
Read more

The vice president said his “physician has not recommended that.”
Read more

The Japanese-owned MV Wakashio ran aground in Mauritius on July 25 and began spilling oil Aug 6. It broke in half Saturday.
Read more

Court records say a 19-year-old man accused of spilling mercury at several Houston locations stole the liquid metal from an abandoned business, tried to sell it in small amounts to people for $20 and spilled some as he played with it in his hands
Read more

Senate Majority Leader Mitch McConnell (R-Ky.) signaled on Tuesday that he will introduce the GOP's coronavirus relief package this week."I'm going to introduce a bill in the next few days that is a starting place. That enjoys fairly...
Read more

Zoom will stop accepting new users in some markets