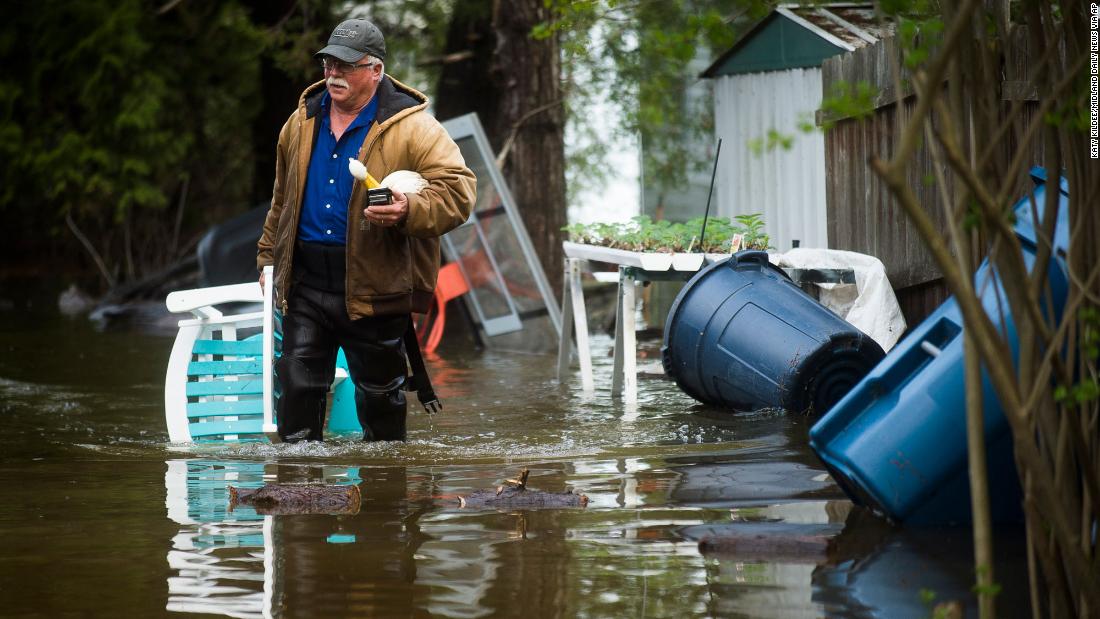 The Tittabawassee River at Midland, Michigan, is forecast to crest 38 feet at 8 p.m. ET today, according to the National Weather Service.

This forecast crest is about 12 hours later than forecasters initially thought.

Residents should “seek higher ground” as far east and west of the Tittabawassee River as possible, according to the city of Midland’s website.

New record: The river has set a new record this morning, surpassing 33.89 feet which was the previous record set on September 13, 1986. The river height is currently 33.97 feet and rising quickly.

State of emergency: Michigan Gov. Gretchen Whitmer declared a state of emergency last night for Midland County after both the Edenville and Sanford dams breached and urged immediate evacuations.

The Republican National Committee (RNC) said Monday it's planning a convention that complies with all health regulations in place in Jacksonville, Fla., during the August event."The RNC is committed to...
Read more

A fantastic deal - for a limited time, you can get the Skullcandy Crusher ANC noise canceling headphones on sale for $259.
Read more

Southampton manager Ralph Hasenhuttl says he is "very proud" of his team after an "unbelievable" win against Manchester City.
Read more

A 100-year-old great-great-grandmother in the United Kingdom isn't letting the novel coronavirus take her down, overcoming her battle with COVID-19 after a more than two-week hospital stay, her family says.
Read more

The department’s Public Integrity Section, which has a mixed record in complex corruption prosecutions, is looking at whether senators broke the law with coronavirus-related stock trades.
Read more

Some lawmakers believe reducing or ending immunity for police officers is crucial to hold law enforcement who engage is misconduct accountable.
Read more

Michigan's governor declared a state of emergency in Midland County on Tuesday after two dams burst, endangering the town of 40,000 people.Gov. Gretchen Whitmer (D) said at a news conference Tuesday evening that do...
Read more

More than a year after conspiracy theorist Alex Jones was banned from other platforms, Google has booted InfoWars from the Android store in response to misinformation surrounding the novel coronavirus COVID-19.
Read more

Pompeo knocks Menendez: ‘That’s not someone who I look...

Secretary of State Mike Pompeo slammed Sen. Bob Menendez (D-N.J.) on Wednesday at a State Department press briefing after being questioned about the removal of the agency's inspector general (IG).During the briefin...
Read more

Think you know the Minnesota Vikings? Here's your chance to find out with a crossword puzzle where every answer has to do with the team.
Read more

Before “Survivor,” “The Amazing Race” and “American Ninja Warrior,” there was MTV’s “The Challenge.”
Read more

Surface Go 2 will get something of a price hike compared to the original, if this report is accurate.
Read more

Wayne Rooney will be "relishing" the chance to come up against Manchester United once again and will go on to coach for years to come, says Michael Carrick.
Read more

Leeds legend Rob Burrow struggles to hold back the tears at a fundraising match following his diagnosis with motor neurone disease.
Read more

Many Social Security beneficiaries have already received economic impact payments issued under the CARES Act. Officials recently said those who have not can expect to receive theirs in late May or early June.
Read more

Chad Wolf, the acting Homeland Security secretary, joins "CBS This Morning" to discuss President Trump's executive order on police reform. He said he does not believe there is systemic racism in the country's law enforcement communities.
Read more

Dutch Prime Minister Mark Rutte says the Netherlands, Austria, Denmark and Sweden are working on a proposal for a European recovery fund that will have tough conditions attached for countries that seek financial help
Read more

Sarah Wright was accepted on to a drug trial in the US but cannot fly due to coronavirus restrictions.
Read more

Manhunt on in Pakistan for suspect in killing of 2 cousins