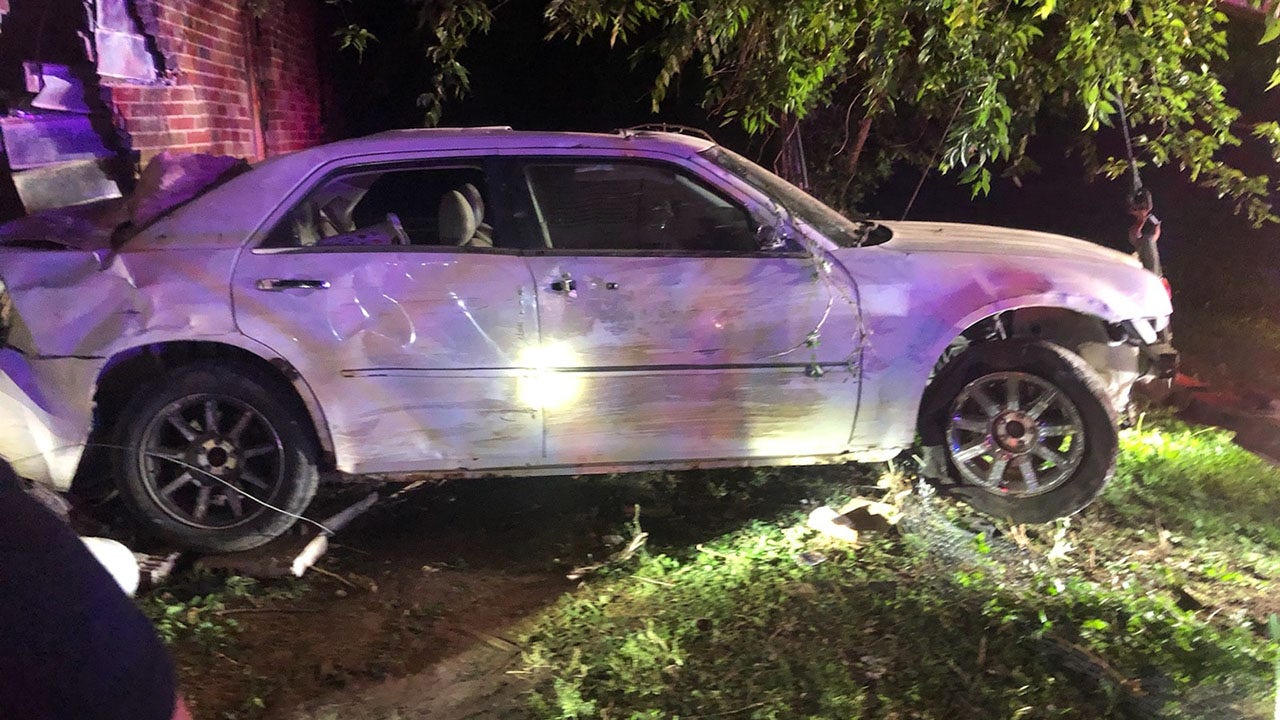 An Oklahoma driver was arrested on the roof of a house Tuesday night after leading police on a high-speed chase that ended with the vehicle crashing into a home, authorities said.

A sheriff’s deputy and Oklahoma City police officer tried to stop a vehicle after seeing the driver make an illegal lane change on Interstate 40 and Interstate 44 around 9:50 p.m., the Oklahoma County Sheriff’s Office said.

The unnamed driver refused to stop and sped away. The chase ended four minutes later after the driver crashed into a home, according to authorities.

“Fortunately, there weren’t any injuries,” the sheriff’s office said.

The driver tried to evade police after the crash. Authorities said the suspect was eventually found nearby hiding on the roof of a house and was arrested.

The driver crashed into a home and was arrested after police found him hiding on the roof of a house.

The sheriff’s office released a photo of the damaged car being pulled from the house. No details on the damage to the home were given.

With test results lost, an Afghan family fell to...

Dr. Yousuf Aryubi's family assumed they just had a bad cold, as one after another, they came down with fevers and coughs — all because one of the Afghan capital's main hospitals never told them the results of Dr. Aryubi's coronavirus test
Read more

The 700-plus page stimulus package the Senate is drafting will give Treasury Secretary Steve Mnuchin broad authority to rescue beleaguered airlines and related distressed companies with $46 billion in direct fi...
Read more

Uber has cut 3,000 jobs from its workforce, its second major wave of layoffs in two weeks as the coronavirus slashed demand for rides
Read more

Coronavirus: One week in one hospital

The BBC has been given unprecedented access to a hospital in the heart of London, for one week.
Read more

Anti-China sentiment is on the rise

A new POLITICO/Morning Consult poll finds more voters view China as an "enemy" as Trump and Biden trade shots over who's softer on the country.
Read more

The amphetamine called captagon is known as the "Jihad drug" because it is used by ISIS fighters to inhibit fear and pain, Italian police said.
Read more

America has now fallen behind Canada, Denmark and Sweden, among other nations.
Read more

Software called Hide UI, created by Grayshift, a company that makes iPhone-cracking devices for law enforcement, can track a suspect's passcode when it's entered into a phone, according to two people in law enforcement.
Read more

A controversial new security law has taken effect in Hong Kong. It was implemented by the Chinese Communist Party in Beijing, and many argue the law curtails freedom of speech and diminishes Hong Kong's political and economic autonomy. Isaac Stone Fish, a CBS…
Read more

Two Native American tribes in South Dakota continue to defy orders from Gov. Kristi Noem to take down road checkpoints the tribes had set up to stop coronavirus infections from spreading
Read more

Costco trended on Twitter after a video captured an employee called Tison asking a customer to leave a store over his refusal to wear a mask.
Read more

Ambassador Susan Rice wrote in the email that President Obama had emphasized that everything should be done "by the book."
Read more

More than 2,000 people died in an area where decades of conflict have led to widespread mistrust.
Read more

Biden says he hasn’t been tested for coronavirus

Joe Biden says he’s not personally concerned about getting the coronavirus -- and shared that he hasn’t yet been tested for COVID-19, the disease caused by the virus.
Read more

The season of Adam Driver has been decade in...

Watching a scene primarily concerned with the dynamic between a film's protagonist and his romantic rival, a viewer might not expect the random guy in the corner to attract too much attention. And yet as Oscar Isaac and Justin Timberlake's characters in 2013'…
Read more

Oregon State Police said an officer who made an "okay" gesture during a Saturday protest was checking on a man who had been pushed to the ground and was not making a white power sign. Police ...
Read more

The Senate majority leader argued liability protection was the "only way" the U.S. economy could bounce back from the pandemic.
Read more