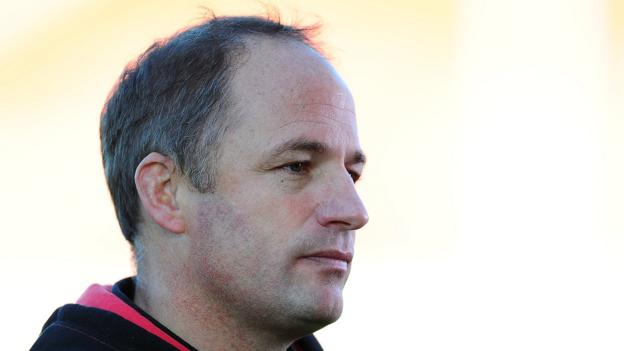 Gloucester director of rugby David Humphreys says he is worried about the impact Covid-19 is having on the mental health of players who are struggling to cope with a lack of routine.

Humphreys added that the mental wellbeing and safety of players is “driving all our decision-making and planning” before Premiership Rugby’s potential return in July.

“We are dealing with a lot of young men who are used to a very timetabled, structured week throughout the course of their career,” he said.

“We have to manage that and give them a goal to get back playing.”

The competition has been suspended since 16 March because of the coronavirus pandemic.

With nine rounds of fixtures outstanding, Premiership Rugby hopes to restart the season in the summer, pending government guidance.

Humphreys’ Gloucester are ninth in the Premiership, which was suspended after 13 rounds of matches

“We are all hugely worried about the impact coronavirus is having on the wider world, but from a narrow professional rugby point of view, nobody would have believed two months ago the short-time impact it could have and the long-term impact there now might be,” Humphreys, a former Ulster and Ireland fly-half, told BBC Sport NI’s Sport Re-Run series.

“When you are used to a certain way of life and you preparing for games week in week out, I think we have all taken some time to come to terms with a new way of life – the ‘new normal’ that people talk about.

“The single biggest concern is the health and safety of the players.

“But when you start to talk about the crowds and everyone else around the game, it has an impact on a much broader group of people who look after professional sports.”

Humphreys said the mental wellbeing and safety of the players can be the only barometer to use when deciding when rugby can return.

“We have plans in place to make sure we have adapted to what the new world looks like when government, World Rugby and the PRL (Professional Rugby Limited) who govern the game give us the go-ahead.

“It is hugely difficult but I do know that rugby will survive, sport will survive – and, when the wider health implications of coronavirus are known, rugby will adapt.

“Some day soon we will be back playing the game we love.”

Hospitals across Texas prepare to hit capacity amid virus surge

Raise your glass! This Nigerian company wants to change how locally made gin or ‘ogogoro’ is perceived

Facebook pledges to ‘get better and faster’ at addressing hate speech

Jurgen Klopp: ‘I want a Liverpool team with a Scouse soul’

Worcester Warriors say that injured Michael Fatialofa has their full support in a disagreement over unpaid medical fees.
Read more

Vice President Mike Pence's office is being given authority over media response and messaging on the coronavirus after he was tasked with overseeing the federal response to the disease, a person familiar with the arrangem...
Read more

Opinion | How to Crisis-Proof Our Food System

The pandemic has exposed the weaknesses of a nationalized and inequitable food system.
Read more

Bitcoin Cash “halving event” could cause many miners to...

Laura Rudd is ineligible for support payments, as she was not married to her partner of nine years.
Read more

Stu Holden looks at Giovanni Reyna’s injury setback, an up-and-down showing from Weston McKennie and Tyler Adams’ performance for RB Leipzig as the Bundesliga returned to action over the weekend.
Read more

15 children are hospitalized in New York City with...

Fifteen children in New York City have been hospitalized with symptoms compatible with a multi-system inflammatory syndrome possibly linked to coronavirus, according to a health alert issued by the New York City Health Department on Monday.
Read more

Horace Grant denies he was source for ‘The Jordan...

Former NBA forward Horace Grant, who played with Michael Jordan in the early 1990s, vehemently denied he fed author Sam Smith information about the team for his book “The Jordan Rules.”
Read more

The U.S. and China’s blame game isn’t saving any...

The world’s two leading powers are trading insults and one-upping each other in a childish blame game.
Read more

Supreme Court showdown over Trump’s tax returns and the...

The Supreme Court heard arguments via teleconference this week on two highly controversial issues: President Trump's tax records, and the Electoral College. Ilya Shapiro, director of the Robert A. Levy Center for Constitutional Studies at the Cato Institute, …
Read more

Hundreds of millions of smart devices at risk of...

Host of vulnerabilities discovered in 20-year-old code - and your smart home devices could be at risk.
Read more