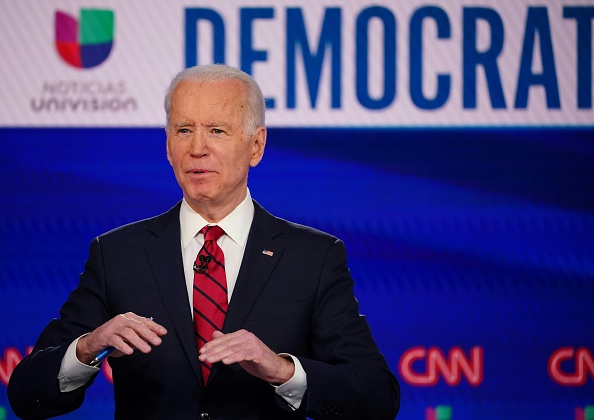 Lawyer Douglas Wigdor announced on Friday that his firm will no longer be representing Tara Reade in her sexual assault allegations against former Vice President Joe Biden.

“Our decision, made on May 20, is by no means a reflection on whether then-Senator Biden sexually assaulted Ms. Reade,” the statement said.

Wigdor has been a leading attorney throughout the #MeToo movement who is best known for bringing cases against Fox News, Bill O’Reilly and Harvey Weinstein.

Although Wigdor did not provide a reason for leaving, he said, “Much of what has been written about Ms. Reade is not probative of whether then-Senator Biden sexually assaulted her, but rather is intended to victim-shame and attack her credibility on unrelated and irrelevant matters.”

When contacted by Newsweek, Wigdor responded by email, saying, “We will not be providing further comment.”

His statement comes a day after defense attorneys in California questioned the legitimacy of Reade’s testimony in cases for which she was an expert witness on domestic violence.

Reade testified under her old name Alexandra McCabe as a government witness for nearly a decade in Monterey County.

Reade told The New York Times that she obtained her degree through a “protected program” at the time because she had been a victim of spousal abuse, which led her to change her name and has thus confused the school about her gradation status. Karen Hamilton, an Antoich spokesperson, has disputed this arrangement to the Times.

Reade went on to receive her law degree from Seattle University under her new name.

Despite his high-profile plaintiff cases, Wigdor is a conservative Republican and a prominent supporter of President Donald Trump.

“We genuinely wish Ms. Reade well and hope that she, as a survivor, is treated fairly,” he said Friday, “We have and will continue to represent survivors regardless of their alleged predator’s status or politics.”

Biden has straight out denied the allegations against him, saying in a statement on May 1, “They aren’t true. This never happened.”

“As a presidential candidate, I’m accountable to the American people. We have lived long enough with a president who doesn’t think he is accountable to anyone, and takes responsibility for nothing. That’s not me. I believe being accountable means having the difficult conversations, even when they are uncomfortable. People need to hear the truth,” Biden wrote.

Newsweek reached out to the Biden campaign but did not receive comment before publications.

Reade’s allegations against the presumptive Democratic nominee have called into question the role politics play in incidents of sexual misconduct. Many Democratic politicians who have voiced support for Biden amid these allegations have come under criticism for defending him despite previous oppositional views regarding incidents in the past.

New techniques are being used to transform images from Hubble into spectacular 3D visualisations.
Read more

For LGBTQ youth, home might not be a safe...

With schools closed amid the coronavirus pandemic, some LGBTQ young people have lost crucial support systems and are self-isolating with unsupportive relatives.
Read more

"The GOP thought they could score a political victory by forcing people to choose between staying safe and risking their lives to vote," Wisconsin's Democratic chairman said.
Read more

Viral photos of crowded beaches in Orange County is "an example of what not to see," Newsom said.
Read more

Many viewers expressed disbelief that the ad was ever allowed to air.
Read more

A family suffering from cabin fever due to the novel coronavirus lockdown in Virginia went out for a drive on Saturday and stumbled upon two bags of cash, totaling nearly $1 million, sources reported.
Read more

IndyCar goes virtual racing as it waits to get...

The latest film in the dystopian franchise will focus on Panem's tyrannical President Snow in his younger years.
Read more

In a story May 26, 2020, about what’s arriving on TV, streaming services and music platforms this week, The Associated Press erroneously reported that the #OUTLOUD Raising Voices concert event airs on Wednesdays and Thursdays
Read more

Illinois to Open Over 5,500 Childcare Centers at End of May

6 months on, hasn't completed physical. Why?