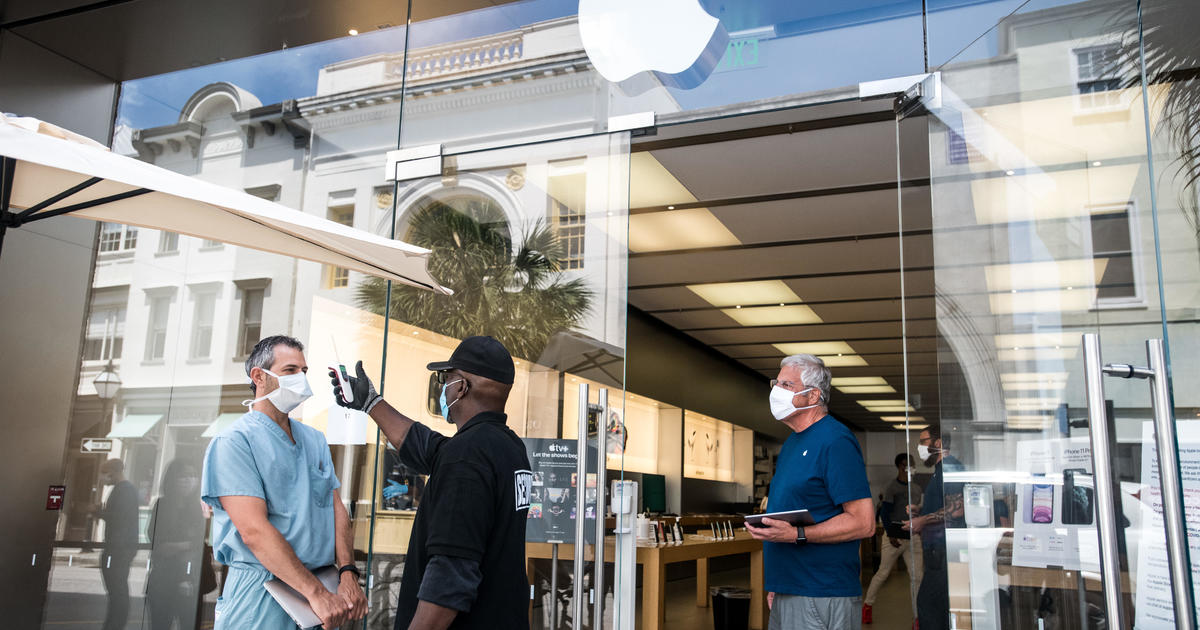 Apple plans to reopen 100 reopen stores this week as states begin to lift stay-at-home orders, though it will impose social-distancing requirements including mandatory face masks for workers and customers.

“This week we’ll return to serving customers in many U.S locations,” the company said Tuesday in a statement. “For customer safety and convenience, most stores will offer curbside or storefront service only, where we provide online order pick-up and Genius Bar appointments.”

Two weeks ago, the company reopened a handful of stores in Idaho and Alabama.

Apple is implementing health measures as it reopens stores, including facial coverings, temperature checks for customers and limiting the number of visitors who enter a store. That could cause service delays, according to the company.

Apple said some of its reopened stores will welcome walk-in customers. The technology giant operates more than 250 stores across the U.S., all of which were shuttered in mid-March. Apple said earlier this month its retail division is monitoring local health conditions and government guidance in determining which stores to open.

Stores in Kansas, Kentucky, Mississippi, Missouri, Nevada, Texas and Pennsylvania will reopen. Twelve of the stores – including one in New York, five in Michigan and six in California – will offer curbside service only. Stores in Atlanta, Dallas, Houston, Miami, St. Louis and San Francisco will accept in-store customers.

The coronavirus pandemic has hurt Apple’s profits this year and disrupted its supply chain, with Foxconn, its vendor that  manufactures iPhones in China, temporarily shuttered in February. The factories have since reopened, but the closure is expected to delay the fall release of Apple’s next iPhone line.

Following are the 100 store locations Apple plans to reopen this week:

The Tianwen-1 mission – China's most ambitious attempt yet at interplanetary exploration – aims to send an orbiter, lander and rover to the red planet.
Read more

Flake formally endorses Biden: ‘We need a president who...

Inside Mexico’s fight against coronavirus

With support from other groups lagging, Trump makes push...

Trump caps 3-day western swing in Arizona making pitch to Latino voters, a group he is turning to hoping to offset softening support among other demographics.
Read more

DJI wants us all to fly free, offers up...

In lockdown? You can still explore the outside with a discounted drone from DJI, and other excellent products from the Osmo range.
Read more

Paul Batura: If God offered, what would you ask...

I am grateful for the power of prayer. It has sustained me in times of trouble and deepened my walk with the Lord.
Read more

How an arrest upended filming of ‘Surviving Jeffrey Epstein’

Pelosi on Trump: ‘With him, all roads lead to...

In Defense of Liz Cheney

Cheney has deeply held views on foreign policy, and doesn’t hide them, even when they depart from those of the president.
Read more

Apple’s Homepod speaker gets a $100 price cut ahead...

Just ahead of the Memorial Day sales event, you can score a $100 price cut on the Apple Homepod smart speaker at Best Buy.
Read more

The 700 files, which were retained by the Home Office, have been at the centre of a long-running row.
Read more

Jordan accuses media of being ‘cheerleaders at interesting times’...

"It's nice to be home but deeply disappointing to leave China under such abrupt circumstances," Australian Broadcasting Corporation correspondent Bill Birtles said on Twitter.
Read more

When Hurricane Sally blew through Mobile, Ala., Wednesday it knocked over the steeple of the El Bethel Primitive Baptist Church, photos show.
Read more

Jennifer Lopez put some hard work in the gym this week -- but not without a photoshoot.
Read more

The Milwaukee Bucks and Miami Heat will matchup in the second round of the NBA Playoffs with the winner advancing to the conference finals.
Read more

Sabrina Ionescu became the first NCAA Division I player – man or woman – to reach 2,000 points, 1,000 assists and 1,000 rebounds in her career
Read more

A leak has revealed an AMD Ryzen 4000 processor for desktop – but it doesn't score as high as leaked Ryzen 4000 mobile chips.
Read more

Pence told to be on standby to assume powers...

President Trump's former lawyer Michael Cohen's book accused the president of corruption and fraud, according to an ...
Read more

Brooks' widow sobbed as she asked a Fulton County judge not to grant bond, saying "My husband didn't deserve to die."
Read more

How much will I receive from the stimulus bill?

Federal program under the spotlight amid violent clashes between law enforcement and the public.
Read more

Former Rep. Michael “Ozzie” Myers (D-Penn.) was charged with bribing an election official to help candidates who had either hired Myers or whom he favored to win for other reasons, the Justice Department revealed Thursday.
Read more

Nibir Sarma has become the first winner of the “Jeopardy!”
Read more