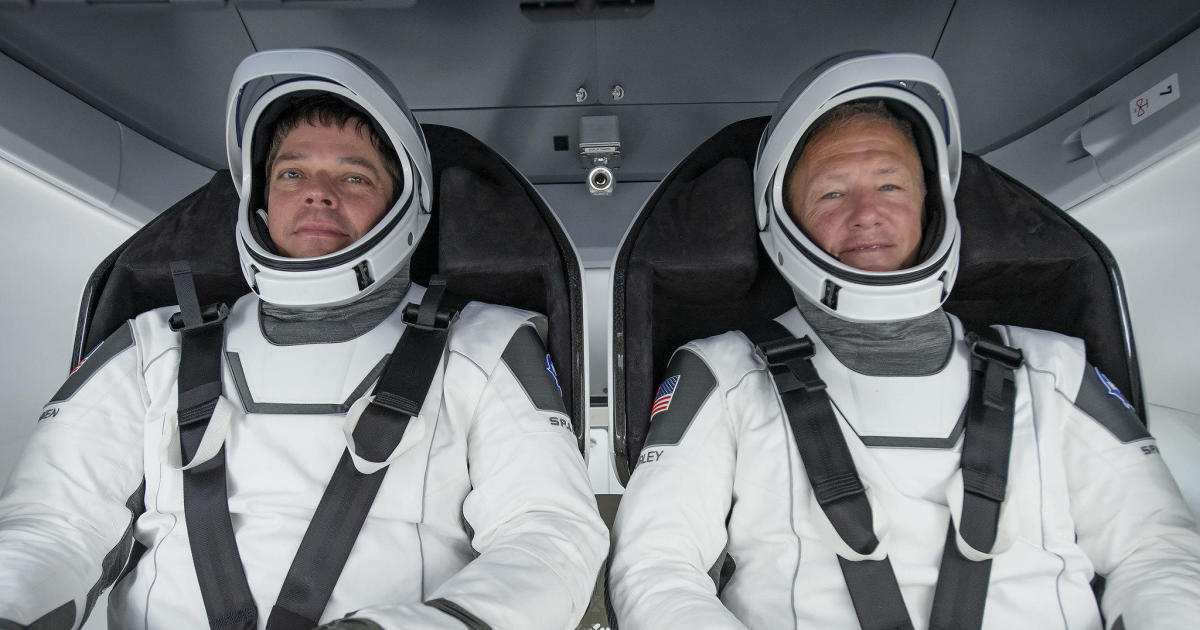 The U.S. is less than 24 hours from a series of firsts for the nation’s space program: the first manned orbital mission in nearly a decade, and the first using a privately owned and operated spacecraft. But the mission’s ability to launch will all depend on the weather.

The launch forecast is improving. For SpaceX and its Falcon 9 rocket, there’s a 60% chance the weather on the launch pad will cooperate for a moment in space history.

Along the U.S. eastern seaboard, seas are calm. That’s important, because in a launch crisis, the SpaceX capsule would ditch to safety in the Atlantic Ocean.

“It absolutely is a help,” Behnken said. “I think we’re way past the polite stage in our relationship.”

NASA hired SpaceX to design and build a new generation of spacecraft — and the Falcon 9 brings some new amenities to space travel. For starters, it’s reusable, which revolutionized rocketry by slashing costs.

Astronauts in streamlined suits will climb into a crew capsule with a retro look. But with all the new technology inside, Crew Dragon has been compared to a “Flying iPhone.”

CBS News spoke with SpaceX founder Elon Musk and NASA Administrator Jim Bridenstine. Musk described Behnken and Hurley as “cool as a cucumber,” and said they have “nerves of steel.”

“I sent them a text,” Bridenstine said. “‘If there’s anything you need me to do to stop this, I’ll stop this in a heartbeat’ … and both said, ‘We’re go for launch.'”

Musk told CBS News that early on, he gave his fledgling SpaceX company less than a 1% chance of succeeding — and now, it’s about to make history. The astronauts will likely spend at least six weeks aboard the space station. But Musk’s goal — everyone’s goal — is to launch them safely.

The House will vote on a bipartisan fix to the Paycheck Protection Program next week amid growing concern over its implementation.
Read more

Who is at risk for COVID-19 complications? People with underlying health conditions, such as obesity, Type 2 diabetes and cardiovascular disease.
Read more

People expect a steady crowd hum or murmur when they watch live sports. Late-night shows have no similar constant buzz; audiences are often silently attentive, so it's not disconcerting to watch them now.
Read more

Artist Ralph Serrano was unable to find work when the coronavirus pandemic spread through New York City. Serrano decided to move back to Puerto Rico, having to leave much of his art behind. Discovered among the trash, his paintings found new homes and Ralph f…
Read more

Trump and Biden in Shanksville, Pennsylvania for 9/11 anniversary

In separate visits, Trump and Biden will commemorate the 19th anniversary of 9/11 at the site of the Flight 93 crash in Shanksville.
Read more

Lenovo's latest bank holiday sales means a huge array of laptop deals are up for grabs this weekend with savings of up to 300.
Read more

Mary-Kate Olsen and Olivier Sarkozy reportedly clashed over having children before the couple called it quits after four and a half years of marriage.
Read more

More Americans are applying for the Supplemental Nutrition Assistance Program (SNAP), but they're largely required to buy food in stores where they could contract Covid-19.
Read more

BBC Scotland looks back at when Aberdeen striker Robbie Winters played in goal for 87 minutes in the 2000 Scottish Cup final.
Read more

The money is to be used to help organisers of cultural and sporting events and suppliers.
Read more

One of the GOP founders of the anti-Trump group The Lincoln Project said Wednesday that polls undercount the level of support that exists for President Trump.
Read more

Attorney General William Barr's decision to have the Department of Justice (DOJ) probe any "substantial allegations" of voter fraud has triggered a wave of backlash that he is seeking to breathe life into President ...
Read more

The firm says the move represents its "long-term commitment to Europe".
Read more

One pill could prevent heart attacks and strokes. Is...

Reducing the number of prescriptions to fill "makes life easier for the physician and the patient," says one cardiologist. But critics note possible risks.
Read more

Nevada Gov. Steve Sisolak (D) announced Thursday that the state will reimplement restrictions on bars in some counties amid a spike in COVID-19 cases.Sisola...
Read more

The $600 weekly boost in unemployment insurance payments is likely to expire before lawmakers reach a deal on the next coronavirus relief package, raising the stakes for negotiations and creating more uncertainty fo...
Read more

Virus testing in the US is dropping, even as...

U.S. testing for the coronavirus is dropping even as infections remain high and the death toll rises by more than 1,000 a day
Read more

In Portland, which has seen more than 50 days of demonstrations, Mayor Ted Wheeler was tear-gassed by federal agents while attending the city's protest on Wednesday night. President Trump has announced what he calls a surge of federal agents to other cities i…
Read more

This is what the Indian Oppo Reno 4 Pro...

The Oppo Reno 4 will be launched in India on July 31 and a week before the launch, we have got the renders of the Indian variant.
Read more

A day after Anthony Barr was placed on injured reserve, the Vikings signed linebacker Hardy Nickerson Jr. off their practice squad.
Read more

Your guide to finding the right Theragun massage gun...

From the ultra-portable Theragun Mini to the professional-grade Theragun Pro, we break down everything you need to know about the popular massage gun.
Read more

3 takeaways from the scathing testimony about William Barr’s...

Five key developments on the spread of coronavirus in...

The coronavirus outbreak is spreading worldwide after killing hundreds in China -- and there's no end in sight.
Read more

NASCAR bans the confederate flag at events "to provide a welcoming and inclusive environment."
Read more

A crowd of maskless protesters packed into a Utah County Commission meeting on Wednesday to speak out against a state requirement for students to wear masks when school returns. Dozens of demonst...
Read more

What it’s like to play a victim of police...

There are plenty of films that depict conflicts between Black communities and police. Actor Algee Smith describes what it's like to take on those roles.
Read more

For the first time in 54 years the celebrations are being held online due to the coronavirus pandemic.
Read more