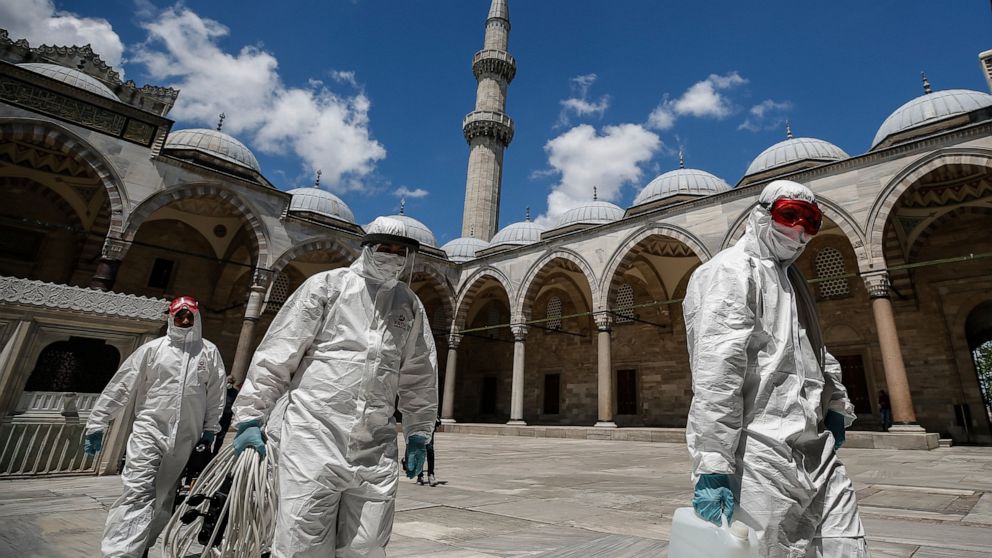 Turkeys COVID-19 death toll reached 4,397 as of Tuesday after 28 new deaths were reported in 24 hours, according to the country’s health minister.

More than 121,500 people with the virus have recovered in Turkey, and the number of COVID-19 patients requiring intensive care continues to decline, according to Health Ministry statistics.

Turkey ranks ninth worldwide for number of confirmed cases, and 14th in the number of virus-related deaths, according to a Johns Hopkins University tally. Experts suspect infection rates globally are higher than reported.

Tuesday was the final day of a four-day nationwide lockdown for Turkeys 83 million residents. President Recep Tayyip Erdogan said he hoped the stay-at-home order would be the country’s last round. Erdogan is expected to ease restrictions and announce new policies later this week.

The Turkish government has relied on limited weekend and holiday lockdowns in large cities to prevent infections among most of the population and required people age 65 and above and under age 20 to stay at home.

CDC warns about “aggressive” rats as coronavirus shuts down...

The Centers for Disease Control and Prevention says people may see an increase in "aggressive" rodent behavior since lockdowns and restaurant closures have forced the animals to search for new sources of food.
Read more

McDonald’s sent its over 13,000 U.S. franchises a 59-page instruction manual for reopening their stores's dining areas, according to CNN.The manual outlines the minimum sanitation and social distancing requirements each store must meet before...
Read more

Tesla furloughs staff and slashes salaries until June as...

Tesla is telling staff to brace for pay cuts and furloughs as the Covid-19 pandemic disrupts operations and cripples demand.
Read more

Many experts expect the coronavirus pandemic to drive down rates even further.
Read more

The only man ever convicted in a U.S. court for a role in the Sept. 11 attacks, now says he's renouncing terrorism, al-Qaida and the Islamic State
Read more

Apple wants to help you create a stronger password

Care inspectors made an unannounced visit to Home Farm, where seven residents have died after a Covid-19 outbreak.
Read more

Sky Sports and BT Sport reveal what the Premier...

If you paused your Sky Sports and BT Sport subscriptions, here's what the Premier League's return means for your bills.
Read more

Atlanta officers who were fired after stun-gun arrest sue...

Two Atlanta police officers who were fired for pulling two college students from a car and using stun guns on them during protests against police brutality are suing the city mayor and police chief.
Read more

Democrats on the House Oversight Committee are requesting the Department of Justice and Department of Homeland Security launch an investigation into reports of white supremacist groups interfering to instigate viole...
Read more

The status of Chuck Canterbury, a former national president of the Fraternal Order of Police, had been in limbo for months after a number of conservatives disapproved of his nomination by President Donald Trump to lead the Bureau of Alcohol, Tobacco, Firearms…
Read more