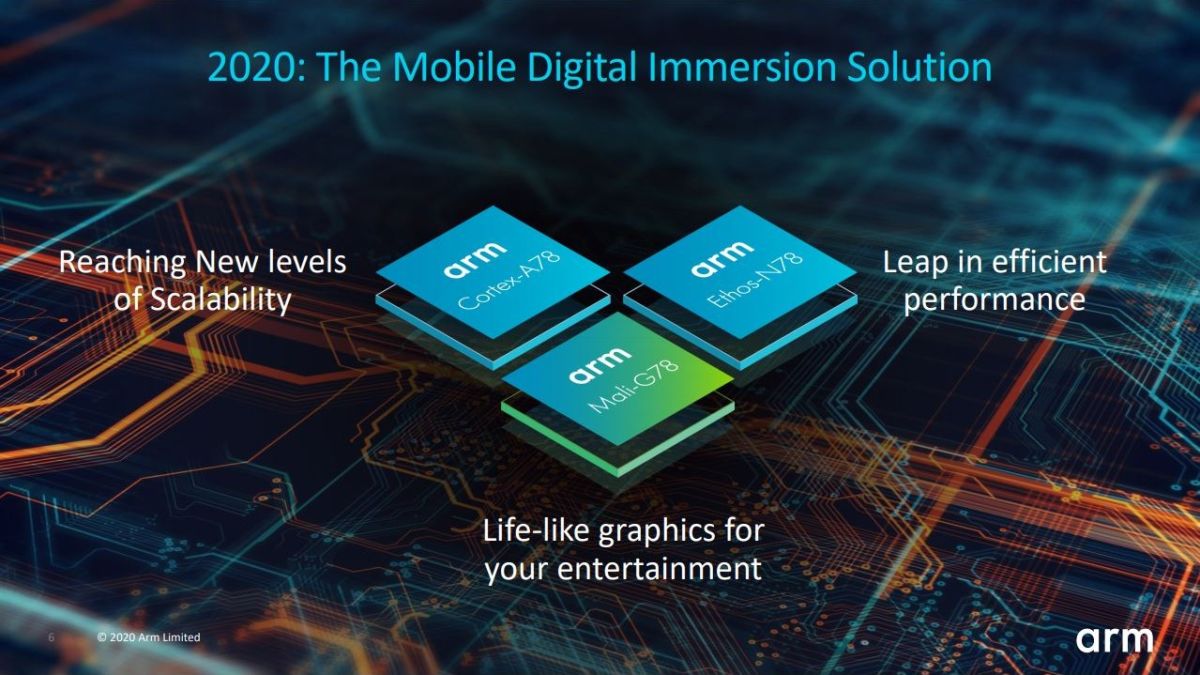 Arm has unveiled its next generation mobile CPU the Cortex-A78 and GPU the Mali-G78 which will be used to power the flagship smartphones of 2021.

The UK-based company provides the chip designs that Qualcomm, Huawei, Samsung and other chipmakers license and then use to to create their own customized system-on-a-chip designs that are found in high-end Android smartphones, tablets and now even laptops such as Microsoft’s Surface Pro X.

The new Arm Cortex-A78 CPU will provide increased performance gains as well as greater power efficiency. According to Arm, the new CPU is its most efficient Cortex-A CPU ever designed for mobile devices. The Cortex-A78 will also be able to deliver more immersive 5G experiences as the result of a 20 percent increase in sustained performance over Cortex-A77-based devices with a 1-watt power budget.

The performance-per-watt of the chip will make it better suited for the greater overall computing needs of foldable devices such as the Samsung Galaxy Fold and devices with multiple screens like the LG V60.

Arm also announced a new engagement program called the Cortex-X Custom program which will give its partners the option of having more flexibility and scalability to increase performance. This will allow its partners to develop solutions for providing the ultimate performance for specific use cases.

The Arm-Cortex-X1 is the program’s first CPU as well as the most powerful Cortex CPU to date. It features a 30 percent peak performance increase over the Cortex-A77 and offers an even more competitive solution for flagship smartphones as well as large-screen devices.

Last year Arm introduced the Mali-G77 GPU based on its new Valhall architecture and the company’s new Mali-G78 builds on the advancements it made to deliver a 25 percent increase in graphics performance over its predecessor. The new GPU supports up to 24 cores and will help extend the battery life of mobile devices.

Finally, based on demand from partners, Arm made the decision to introduce a new sub-premium tier of GPUs. The first GPU in this new tier is the Arm Mali-G68 which supports up to 6 cores and has all the latest features from the Mali-G78.

It will still be some time before the Arm’s partners begin to release chips based on its new designs but based on the information the company released, flagship smartphones in 2021 will likely have improved battery life, graphics and 5G performance.

Champions League to be played at mini-tournament in Lisbon

Swarms of desert locusts have devastated crops in India’s heartland, threatening an already vulnerable region that is struggling with the economic cost of coronavirus lockdown
Read more

Pair married for more than 70 years reunited after...

Mary Humphreys, 88, is now at home with her husband David after the couple were apart for weeks.
Read more

The coronavirus has breathed fresh life into old conspiracy theories and inspired a mishmash of new ones, with a cast of villains that includes Bill Gates, 5G wireless technology, the United Nations and President Donald Trump’s political foes
Read more

NFL to close offices for Juneteenth, making it an...

National Football League (NFL) commissioner Roger Goodell announced on Friday that the league's offices would close next Friday in recognition of Juneteenth, a day that commemorates the effective end of slavery in the Uni...
Read more

Here’s how 3D printing could help fight this aggressive...

Another major medical breakthrough is potentially on the horizon thanks to 3D printing.
Read more

Carmelo Anthony said Monday he could empathize with Dennis Rodman after “The Last Dance” revealed that “The Worm” took a mini-sabbatical in the middle of the season.
Read more

Shares in Saudi Aramco have gained on the second day of trading, propelling the oil and gas company to a more than $2 trillion valuation, where it holds the title of the world's most valuable company
Read more

Column: US Open loses part of identity without qualifying

The U.S. Open lost a big part of its identity when it eliminated qualifying for the first time since 1924
Read more

Various coffee chains are offering modified services in view of the precautionary guidelines in place since the COVID-19 pandemic.
Read more

VIRUS DIARY: In Hong Kong lockdown, watched by a...

Trump lashes out at scientists whose findings contradict him

Amazon is removing all Washington Redskins merchandise from its website, as the pressure for the NFL franchise to change its name mounts.
Read more

More Than 100,000 People Have Died of Coronavirus in the United States