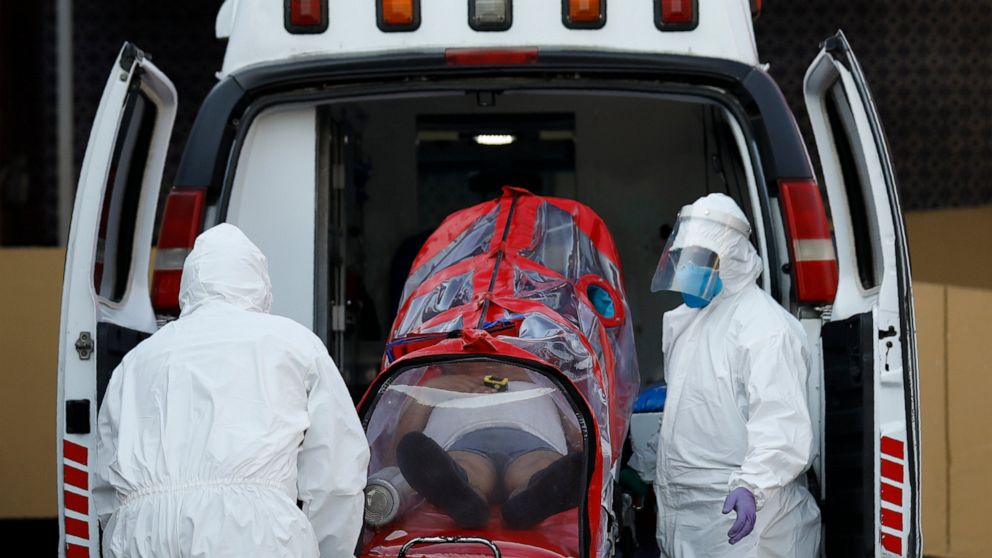 Mexicos health department reported 501 deaths from the coronavirus Tuesday, a new one-day high and the first time the figure exceeded 500.

Mexico has so far recorded nearly 74,560 confirmed cases and 8,134 deaths, though officials acknowledge the number of cases is probably several times higher due to Mexicos extremely low rate of testing.

Mexicos daily death toll is now approaching that of the United States, at around 620, though Brazil leads in daily deaths with over 800.

The announcement came on the same day that dozens of health care professionals blocked a major boulevard in the capital for at least an hour to demand better personal protective equipment. They displayed over-sized coveralls they were supposed to wear and held placards demanding better equipment.

It was the same day that the World Health Organization said in a letter to the Mexican government that it wants to congratulate Mexico on its social-distancing and lockdown measures. But the WHO insisted that testing is vital to containing the pandemic.

Mexico, with over 125 million people, has conducted about 230,000 tests to date, one of the lowest testing rates in the Western Hemisphere.

Assistant Health Secretary Hugo López-Gatell said he believed the rate of increases in new cases in Mexico City, the worst-hit area of the country, would start to decline sometime next week.

Sony's upcoming A7S III could arrive with support for Type A CFexpress cards, a format currently not available on the market.
Read more

The title, which compares racism in America to India and Nazi Germany, is the latest Oprah's Book Club pick.
Read more

Coronavirus: Scaled back Hajj pilgrimage due to start in...

Only a very limited number of Muslims living in the kingdom will be able to make the Hajj this year.
Read more

Busy Philipps revealed that she and husband, Marc Silverstein, have been finding it difficult to be quarantined together amid the coronavirus pandemic.
Read more

South Africa is seeing a “huge discrepancy” between confirmed COVID-19 deaths and much higher excess deaths from natural causes, while Africa’s top health official says the coronavirus is spreading there “like wildfire.”
Read more

Washington, D.C. Mayor Muriel Bowser (D) on Thursday said the federal government's response to recent protests in the city is further evidence that the District needs statehood."We are the nation's capital, a feder...
Read more

Steve Clemons: Today we have a special edition of the Coronavirus Report that builds off of the highly successful, content rich, if I do say so myself, national virtual online summit titled "Health Re...
Read more

These places post the greatest risks for contracting coronavirus

These places post the greatest risks for contracting coronavirus, according to a survey of four public health experts by MLive in Michigan.
Read more

Residents of the beautiful canal city relish its crowd-free streets and canals, and wonder how they can rebuild tourism without surrendering it to the overwhelming visitor levels before coronavirus.
Read more

More Violence in Chicago as White House Plans to...

A shooting outside a funeral home left more than a dozen people wounded in Chicago, where homicides are up sharply from last year. Local authorities are criticizing a White House plan to send in federal law enforcement. Photo: Kamil Krzaczynski/AFP/Getty Imag…
Read more

Used iPhones: A guide on where and how to...

Its no secret: Breaking or losing an iPhone is a real bummer. Theyve become cultural icons in their own right, but also might...
Read more

Democratic Gov. Laura Kelly has vetoed a sweeping coronavirus bill that would have given the GOP-controlled Kansas Legislature control over the state’s pandemic response
Read more

The 11 most logical picks for Joe Biden’s vice...

Biden is now the presumptive Democratic nominee. Here's who could fill out the ticket.
Read more

The US is to withdraw nearly 12,000 troops from Germany in a move that has attracted bipartisan congressional opposition and roiled key allies who see the move as a blow to NATO.
Read more

A national coalition of labor unions, along with racial and social justice organizations, will stage a mass walkout this month to protest against systemic racism
Read more

She called police on him in Central Park. Hear...

Christian Cooper speaks with CNN's Don Lemon about the encounter he had with a white woman who called the police on him during an encounter involving her unleashed dog in Central Park.
Read more

Six Flags announces new safety protocols as it looks to reopen after...