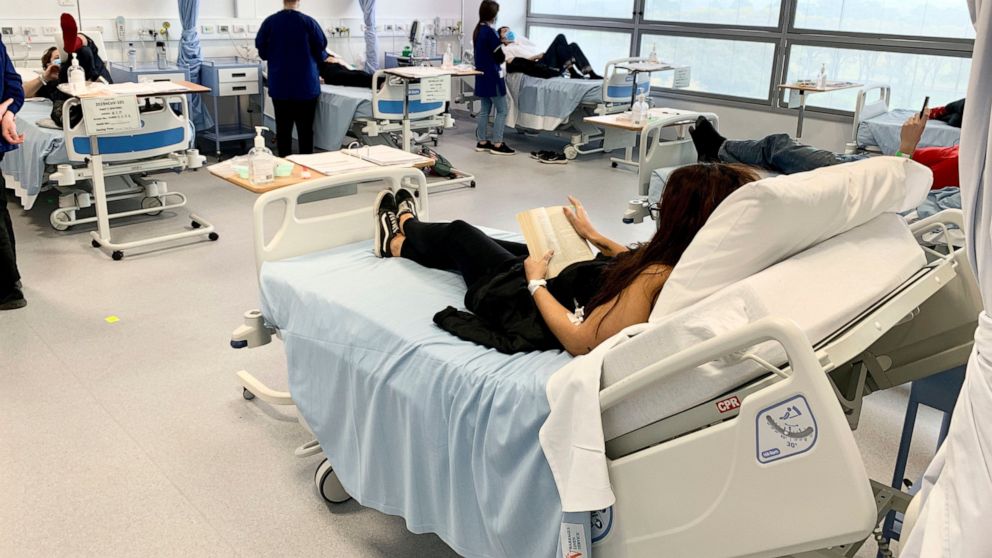 A U.S. biotechnology company began injecting a coronavirus vaccine candidate into people in Australia on Tuesday with hopes of releasing a proven vaccine this year.

Novavax will inject 131 volunteers in the first phase of the trial testing the safety of the vaccine and looking for signs of its effectiveness, the companys research chief Dr. Gregory Glenn said.

About a dozen experimental vaccines against the coronavirus are in early stages of testing or poised to start, mostly in China, the U.S. and Europe. Its not clear that any will prove safe and effective. But many work in different ways, and are made with different technologies, increasing the odds that at least one approach might succeed.

We are in parallel making doses, making vaccine in anticipation that well be able to show its working and be able to start deploying it by the end of this year, Glenn told a virtual news conference in Melbourne from Novavax headquarters in Maryland.

Animal testing suggested the vaccine is effective in low doses. Novavax could manufacture at least 100 million doses this year and 1.5 billion in 2021, he said.

Manufacture of the vaccine, named NVX-CoV2373, was being scaled up with $388 million invested by Norway-based Coalition for Epidemic Preparedness Innovations since March, Glenn said.

The results of the first phase of clinical trials in Melbourne and Brisbane are expected to be known in July, Novavax said. Thousands of candidates in several countries would then become involved in a second phase.

Most of the experimental vaccines in progress aim to train the immune system to recognize the spike protein that studs the coronavirus outer surface, priming the body to react if it was exposed to the real virus. Some candidates are made using just the genetic code for that protein, and others use a harmless virus to deliver the protein-producing information. Still other vaccine candidates are more old-fashioned, made with dead, whole virus.

Novavax adds another new kind to that list, whats called a recombinant vaccine. Novavax used genetic engineering to grow harmless copies of the coronavirus spike protein in giant vats of insect cells in a laboratory. Scientists extracted and purified the protein, and packaged it into virus-sized nanoparticles.

The way we make a vaccine is we never touch the virus, Novavax told The Associated Press last month. But ultimately, it looks just like a virus to the immune system.

Its the same process that Novavax used to create a nanoparticle flu vaccine that recently passed late-stage testing.

Trump backs off plans to wind down task force...

President Trump on Wednesday said he backed off plans to dissolve the White House coronavirus task force after public outcry, saying he didn't realize how "popular" the group of medical experts and government leaders was....
Read more

Seabird poop is worth millions, say scientists trying to...

Trying to raise awareness about the importance of seabird conservation, scientists set out to quantify their contributions by valuing their feces. As it turns out, failing to protect seabirds could cost nearly half a billion dollars annually.
Read more

Jrue Holiday to launch a social justice fund with...

Throughout his career, the NBA's Jrue Holiday has averaged 6.4 assists per game. This next one, though, will be the biggest.
Read more

Rafiq Maqbool remembers never flinching while covering high-risk news assignments such as the war in Afghanistan, the Sri Lankan tsunami or the conflict in Kashmir, where he grew up and decided to become a photojournalist. But a call on April 20 filled him w…
Read more

This Day in History: May 20

A massive explosion rocked Beirut on Tuesday, with multiple videos on social media showing a large plume of smoke rising over the city following a blast.There were no immediate reports deaths or injuries, ...
Read more

Here's a look at the top stories making headlines on the "CBS Weekend News with Major Garrett."
Read more

Only half of Americans would get a COVID-19 vaccine,...

Among the fifth who told AP/NORC Center pollsters they wouldn't, safety worries were the top concern.
Read more

NBC News sets goal of a workforce that is...

NBC Universal's News Group's chairman has set a bold goal of having a workforce at NBC News, MSNBC and CNBC that is 50 percent minority
Read more

The Walt Disney Co. will make a sequel to the 2019 live-action “The Lion King,” with Barry Jenkins, director of the Oscar-winning “Moonlight” and the James Baldwin adaptation “If Beale Street Could Talk,” set to direct
Read more

A Help for Heroes field guide is now available to health workers on the coronavirus front line.
Read more

Meghan Markle and Prince Harry may have been somewhat unprepared for the lack of privacy that their move to Los Angeles has brought them.
Read more

Harlem Globetrotter speaks out after banana thrown at him...

A member of the Harlem Globetrotters is speaking out on racial insensitivities after two White Alabama news broadcasters threw fruit, including a banana, at him on live television.
Read more

We have more screens in our lives than ever before, from the smartphone in our pocket to the laptop for work. And yet,...
Read more

Demonstrators have gone from demanding justice for George Floyd to insisting on changes in police practices and race relations in general.
Read more

More self-identified Republicans say in a new poll that they are wearing masks "all the time" outside their homes,  although the percentage is still smaller than among Democrats or independents.Axios/Ipsos ...
Read more

Florida Warns of Superspreader Events at Church Choirs and...

New WD My Passport compact HDD with up to...

Western Digital has announced its latest line of My Passport HDD in India.
Read more

Navarro steps back from comments that China trade deal...

White House trade adviser Peter Navarro has walked back his statements suggesting that the trade deal between the U.S. and China was in peril, saying Monday that his words were taken "wildly out of context.""They h...
Read more

73% of Americans Say Negative COVID Test Should Be...

A majority of Americans say that a negative test result for the novel coronavirus should be required before returning back to work or school, according to a new poll.
Read more

Hong Kong ramps up security ahead of controversial bill reading