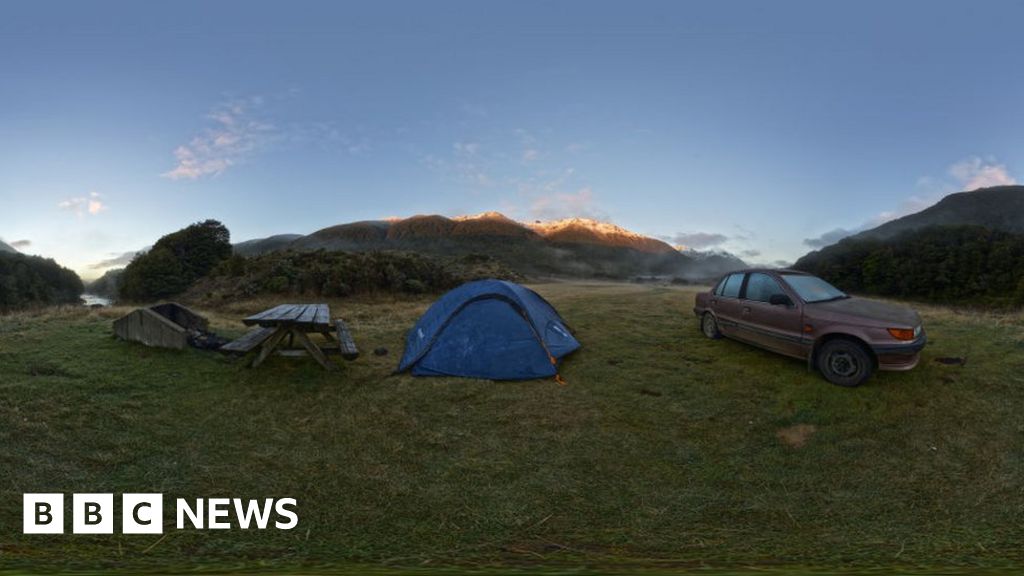 Two missing walkers have been found in the New Zealand wilderness, 19 days after they set off.

Dion Reynolds and Jessica O’Connor, both 23, began walking in the Kahurangi National Park on 9 May, and expected to be gone for six or seven days.

But after getting lost in fog they were both injured in a fall.

They found water and were rescued when a search helicopter noticed smoke from their camp fire.

After being winched into a different aircraft, the pair hugged their rescuers – who in turn gave them chocolate bars.

The Kahurangi, in the north-west of the South Island, is New Zealand’s second biggest national park.

Ms O’Connor, a kayak guide, and Mr Reynolds, a chef, took enough food for around a week, friends said.

But early on in their trip, they got lost in fog, before Ms O’Connor hurt her back and Mr Reynolds strained his ankle.

After suffering the injuries, they found water, lit a fire, and stayed put. The search began on 18 May.

Hopes were beginning to fade – especially when a jumper found by a search team did not belong to either walker.

But just before 1pm on Wednesday, a search helicopter noticed the smoke and a rescue helicopter was dispatched.

Media playback is unsupported on your device

Police search and rescue co-ordinator Sergeant Malcolm York said the pair were in good spirits, but “had been without food for some time”.

They also survived heavy rain and cold temperatures, but have been discharged from Nelson hospital, the New Zealand Herald reported.

“They did the right thing,” Mr York said. “They stayed put and they made themselves visible.”

Ms O’Connor’s parents spoke to TVNZ after speaking to their daughter on the phone in hospital.

“She was very emotional,” her mother Simone said.

“I think she was in tears and couldn’t talk much…we will talk more once we see her.”

A barbershop and a hair salon in the same northern California town decided to defy the statewide stay-at-home order by opening for business amid the coronavirus public health crisis.
Read more

The majority of emissions cuts from electric cars will be wiped out by new road-building.
Read more

Oladipo having second thoughts: ‘Strong possibility that I might...

If all goes well over the next two weeks, the Indiana Pacers might get back two-time All-Star guard Victor Oladipo, who previously opted out.
Read more

Another company from the tech world is trying to help fight the COVID-19 outbreak.
Read more

TikTok creators are launching a voter registration campaign on Friday that is geared at reaching potential new voters through viral videos on the short form video app.
Read more

The new antigen test is the first where results can be read directly from the testing card, the FDA said.
Read more

10 things to know about the NBA’s restart

The deals are done. The NBA is coming back. The season will resume July 30 at Disney's ESPN Wide World of Sports complex in Florida.
Read more

The Dimensity 720 SoC from MediaTek is out and is the first chipset in its series to be built with 7nm process. It is also one of the cheapest SoC offering 5G connectivity
Read more

Many schools have moved their graduation ceremonies online due to the ongoing coronavirus pandemic. But not all. For one Oklahoma high school's graduation, it was almost business as usual.
Read more

Parents knew kid had coronavirus, sent him to school...

The U.S. leads the world in coronavirus deaths and still has the most cases in the world, with over 6.7 million people sickened by the virus since January.
Read more

Some areas of housing are actually doing better than they were before the coronavirus began sweeping the U.S.
Read more

Some pupils believe they received lower grades because their schools have not performed as well as others in the past.
Read more

President Trump congratulated his daughter, Tiffany Trump, on graduating from Georgetown Law on Monday."Just what I need is a lawyer in the family," the president tweeted. "Proud of you Tiff!"...
Read more

In addition to safety measures, some unions are pressing for police-free schools, canceling rents and mortgages, and bans on new charter programs and standardized testing.
Read more

Twice on Tuesday, President Donald Trump attacked California's Democratic Gov. Gavin Newsom and his executive order expanding vote-by-mail in the state. Specifically, Trump claimed that Newsom's order would send ballots to everyone in California, including no…
Read more

Japan is testing an app that lets sports fans cheer from the...

How to watch the Bundesliga: live stream every match online this week