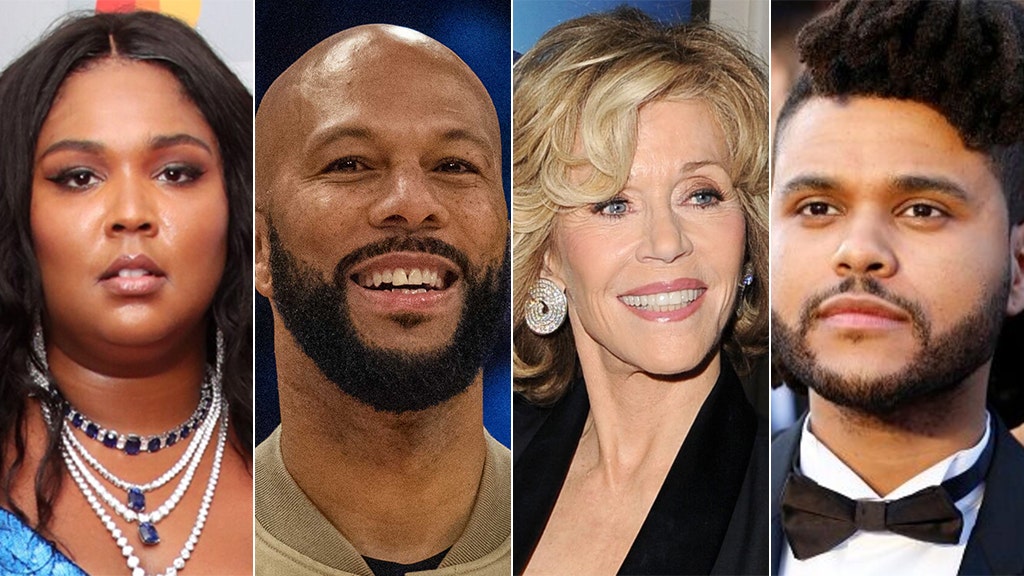 Lizzo, John Legend, Common, Jane Fonda and the Weeknd are just a handful of the celebrities who have signed an open letter demanding local governments to stop providing increases in funds to police.

The letter, released by Black Lives Matter co-founder and activist Patrisse Cullors, is in conjunction with Movement 4 Black Lives, a coalition of over 100 black rights organizations, according to Rolling Stone.

The “open demand” letter requests that governments quit increasing police budgets and instead redistribute those funds to spend on health care, neighborhood infrastructure and education to help support communities across the country, particularly black communities, the outlet said.

CELEBRITIES WHO HAVE JOINED GEORGE FLOYD PROTESTS AGAINST POLICE BRUTALITY

Lizzo, Common, Jane Fonda and the Weeknd are among a number of stars who have signed a demand letter requesting less funding to police.

According to the publication, other entertainers who signed the petition include Talib Kweli, America Ferrera, Brie Larson, Taraji P. Henson and Natalie Portman.

The letter, released in the aftermath of the death of George Floyd, links the horrific deaths caused by both the coronavirus pandemic and police brutality.

“The COVID-19 deaths and the deaths caused by police terror are connected and consequential to each other,” the letter states.

It also points out that the United States has “the largest military budget in the world” yet continues to come up short when it comes to health care.

HELP PREVENT CORONAVIRUS WITH HAND SANITIZER: HOW TO MAKE YOUR OWN

“The United States does not have a national health care system,” the letter reads, adding, “Policing and militarization overwhelmingly dominate the bulk of national and local budgets.”

It also claims that police and military funding has increased every year since 1973 while “funding for public health decreased every year.” It also highlights the Trump administration’s 2018 elimination of the U.S. Pandemic Response Team.

HOW IS CORONAVIRUS TRANSMITTED?

Cullors said that the letter does not ask for all funding to police be eliminated. Instead, supporters demand unnecessary funds as well as tasks of police departments be shifted to other suitable departments with a higher need.

Everything We Know About ‘The Crown’ Season Four So...

Gillian Anderson and Emma Corrin are joining the cast of the Netflix drama as Margaret Thatcher and Princess Diana, respectively.
Read more

It is laser-focused on health tracking and stands out from the crowd thanks to a two-week battery life. But does the new watch do enough to justify its existence in the increasingly busy wearable market?
Read more

Johnny Depp is back in the witness box for a third day at the trial of his libel suit against a tabloid newspaper that called him a “wife-beater.”
Read more

Government employees: What public records should we request as...

CNN has been filing dozens of records request with local, state and federal government agencies to gain insight into the country's response to the coronavirus.
Read more

A Rwandan court has denied bail to Paul Rusesabagina, whose story inspired the film “Hotel Rwanda,” saying the terrorism and other charges against him are of serious nature and he should remain in detention for another 30 days
Read more

Netflix has grabbed exclusive streaming rights to a new Pokémon animated series, Pokémon Journeys, which will land on the platform on June 12.
Read more

Steve McClaren: Former England boss will not be Dundee...

The many colours of Raqqa

The untold story of Abood Hamam, perhaps the only photojournalist to have worked under every major force in Syria's war - and lived to tell the tale. At the start of the uprising he was head of photography for the state news agency, SANA, taking official shot…
Read more

According to Public Policy Polling, Biden is leading Sanders in two of the senator's strongest 2016 states: Kansas and Wisconsin.
Read more

The NBA will keep the spotlight on the social justice movement when the season restarts in late July.
Read more

The Mother And The Murderer

He was jailed for killing her daughter. Then she feared the police had the wrong man.
Read more

Schools—but not public health officials—across the US are making it a rule: Every student needs to have 44 sq. ft. of space. I tried to find out why.
Read more

It looks like AMD could be working on two new CPUs to take on Intel’s recent Core i9-10900K and Core i7-10700K launches.
Read more

A $500 billion corporate assistance program for distressed industries proposed in the $2 trillion Senate coronavirus stimulus bill will include an inspector general and oversight committee, according to a senior administr...
Read more

Snapshots from around the U_S_ are revealing shortfalls in what President Donald Trump describes as the “best testing in the world.”
Read more

Cadets at the U.S. Coast Guard Academy are being credited with saving a mission that had been endangered by the coronavirus pandemic this summer
Read more

Cuomo slams McConnell: States declaring bankruptcy is ‘one of...

Georgia Deputy Fired Over Beating of Roderick Walker for...

A Georgia sheriff's deputy was fired Sunday after being seen on video repeatedly hitting Walker, a Black man who was a passenger in a vehicle pulled over Friday.
Read more

Democrats ramp up pressure on Lieberman to drop out...

Democrats have begun ramping up pressure on Georgia Democrat Matt Lieberman to drop out of the race for one of the Peach State's two Senate seats up for grabs this year, citing concerns that he may cost the party a chance...
Read more