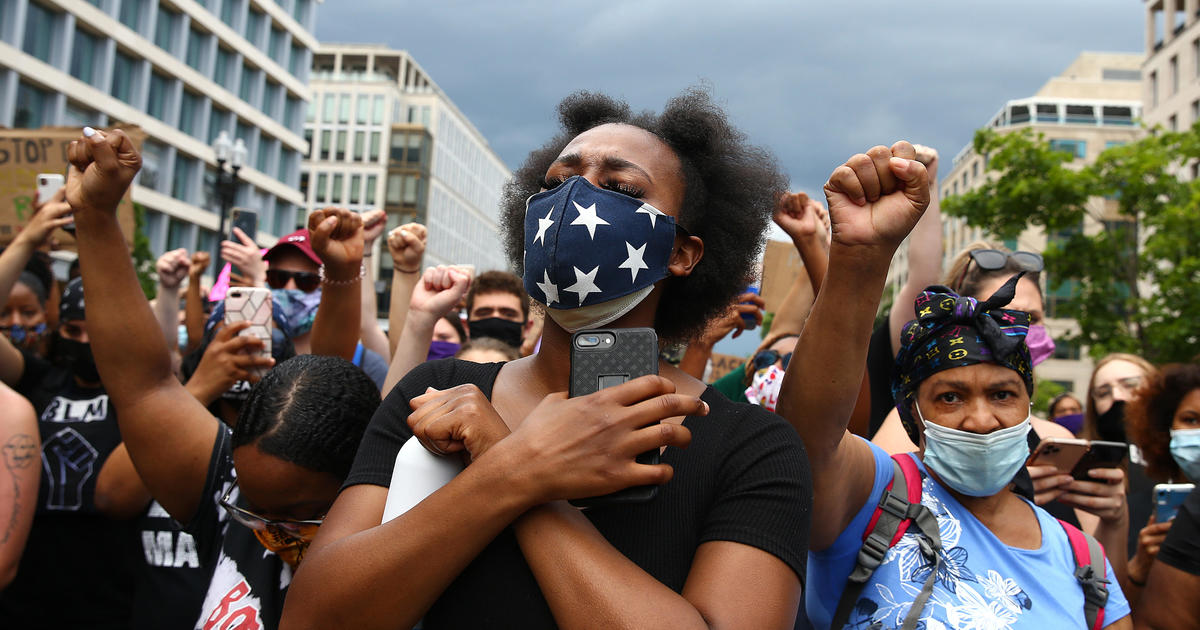 Rahul Dubey, the man who sheltered over 70 protesters in his Washington D.C. home Monday night told CBSN on Friday that his actions were purely “instinctual.” Others have called them heroic.

“It was unfathomable,” Dubey said of the police violence used against peaceful protesters right outside his front door. He called what he saw a “horrific use of force” against people who were out after the city’s curfew.

According to Dubey, police used batons, shields and pepper spray to push people back. He said people were being hit as they ran away.

The chaotic night began around 8:45, past curfew, when Dubey said he heard a loud bang about 30 yards from his stoop, followed by a stream of protesters trying to escape police. “Pounding of batons, cracking of shields, screaming, screeches that were – that I still remember, faces gnarled… police spraying people in the back of the heads,” he said, describing the scene.

Dubey opened his door to people, letting them fill up his home in the Logan Circle neighborhood.

D.C. man praised for sheltering protesters in his home

Fauci responds to ‘mischievous’ critics of photo at Nats...

Anthony Fauci, the nation's leading infectious disease expert, responded to criticism stemming from a photo of him with his mask pulled down during a Washington Nationals baseball game, calling the attacks "mischievous."...
Read more

It is time to immunize our presidential election system from the results of accidental or intentional events deciding the presidency.
Read more

Radio used by Titanic to call for help can...

NOAA argues the telegraph is likely surrounded "by the mortal remains of more than 1,500 people" and should be left alone.
Read more

The proclamation will suspend several guest worker programs, including H-1B visas for those in specialized fields like the technology sector.
Read more

One of Australia’s most popular sports could relocate to...

Players of one of Australia's most popular professional sports could be quarantined on a luxury island under an audacious plan being considered to get them back on the field -- and back on TV -- during the coronavirus crisis.
Read more

Major League Baseball returns Thursday night as the Washington Nationals take on the New York Yankees on ESPN. But this isn't your typical match up. For one thing, Nationals Park's 41,546 seats will be empty.
Read more

Coronavirus: YO! Sushi to shut restaurants and cut 250...

The company, known for its conveyor belt service, has launched a company voluntary arrangement.
Read more

A tweet Saturday from CrossFit founder Greg Glassman that appeared to make light of both the death of George Floyd and the novel coronavirus pandemic resulted in a widespread backlash within the CrossFit community. On Sunday, Reebok announced it was ending it…
Read more

Video stories, which might have passed you by, in our weekly feature: In Case You Missed It.
Read more

A hero was welcomed home in Michigan this week. Phillip Blanks saved a young child's life a few weeks ago during a building fire. Now, many lives are about to be changed, in his name. Janet Shamlian shares his story.
Read more

Officials in the San Antonio area ordered people to wear face masks in public when social distancing isn't practical amid a spike in COVID-19 hospitalizations in Texas as the state continues to reopen itself.
Read more

The Hollywood Premiere is Moving to Your Living Room…

Major studios are rushing new releases to streaming services while movie houses remain closed across the country. The experiment could spell changes to how you watch films even after the theaters reopen.
Read more

As with the Obamacare debate, there is a mismatch between raucous masses and earnest elites The post COVID Politics: Insider Closers vs. Outsider Openers appeared first on The American Conservative.
Read more

Thirteen nuns at a Roman Catholic convent in Livonia, Michigan, have died of COVID-19 complications since the outbreak began, according to a spokeswoman for the Felician Sisters of North America. CBS Minnesota reports.
Read more

Douglas Loverro has served as the associate administrator for the human exploration and operations mission directorate for just seven months.
Read more

Why AHAs are a derm-approved skin ingredient

How to use Alpha-Hydroxy Acids (AHAs) including glycolic and lactic acids to fade dark spots, melasma and shrink large pores in 2020 according to skin experts.
Read more

China accuses US of ‘malicious slander’ in order to...

China on Thursday accused the U.S. of 'malicious slander' in its ordering of the Chinese consulate in Houston to close as tensions ramp up between Washington and Beijing.Foreign Ministry spokesperson Wang Wenbin sa...
Read more

Twitter is actively exploring additional ways to make money from its users, including by considering a subscription model, CEO Jack Dorsey said Thursday. The move comes as Twitter suffers a sharp decline in its core advertising business.
Read more

Pakistani authorities say rescuers have recovered nine more bodies from beneath the rubble of a building that collapsed earlier this week in the southern port city of Karachi, bringing the death toll to 22
Read more

And some signs that the U.S. economy is creeping back to life.
Read more