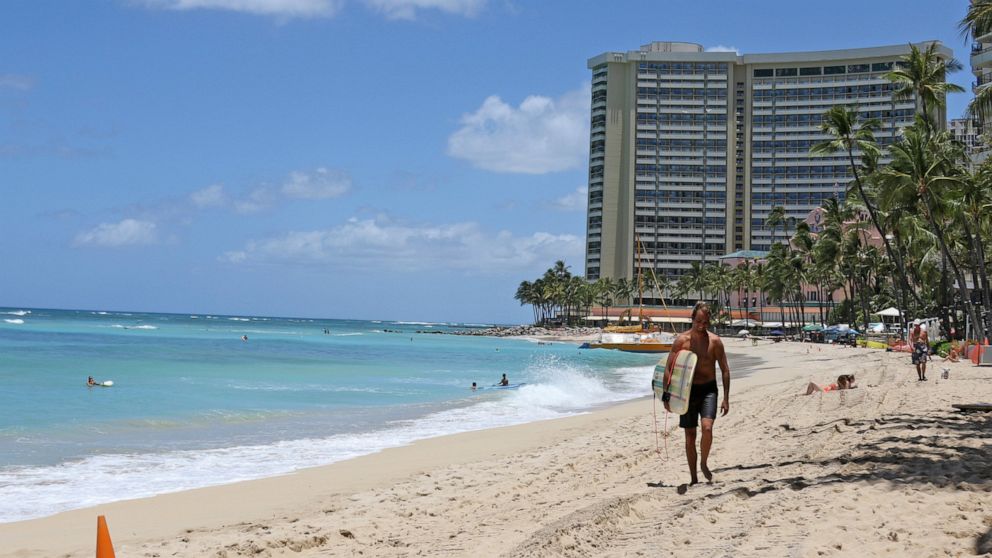 Hawaii Gov. David Ige extended the state’s mandatory 14-day quarantine for all arriving travelers on Wednesday in a bid to keep coronavirus cases in the islands low.

Ige said the rule is being extended to the end of July as the state works to solidify a screening process that could soon allow travelers to return in some capacity.

Officials said they are planning to install thermal screening stations and facial recognition technology at the airports by the end of the year. Ige said the technology would be used only to track people within the airport during the screening process.

Hawaii has among the lowest COVID-19 infection and mortality rates in the nation. Ige enacted a mandatory self-quarantine for all arriving tourists and residents in March.

Violators of the quarantine rules have been arrested, including a resident who was found to have left her home after returning to Waikiki this week.

Officials said the state’s inter-island quarantine rules will be lifted next week, but anyone with a temperature over 100.4 degrees will not be allowed to fly.

GMs think the remote NFL draft will alter the...

The Florida Republican spent thousands of dollars on a speechwriting consultant, and the construction of a private studio.
Read more

The Ohio House of Representatives has passed a bill that would prohibit municipalities from restricting the use of plastic bags.
Read more

WASHINGTON - As the death toll in the novel coronavirus pandemic neared 100,000 Americans this Memorial Day weekend, President Donald Trump derided and insulted perceived enemies and promoted a baseless conspiracy theory, in between rounds of golf. In a flu…
Read more

"Bait bombs" made from food stuffed with explosives are common in India, and are used mostly to hunt wild boars for meat.
Read more

EPA looks to other statutes to expand scope of...

The Environmental Protection Agency (EPA) will work to expand the scope of its coming regulation that will limit what types of scientific research the agency can consider by applying it to several more individual st...
Read more

Ambassador Susan Rice wrote in the email that President Obama had emphasized that everything should be done "by the book."
Read more

Several conservative Republicans are making their displeasure known over the price tag of the GOP's coronavirus relief proposal after it was revealed that Senate Majority Leader Mitch McConnell's opening salvo in the negotiations would cost about $1 trillion.
Read more

Boris Johnson defends the UK union on visit to...

The SNP said the visit showed Mr Johnson was "in a panic" about support for Scottish independence.
Read more

Thousands of LA protesters arrested over curfew won’t be...

Thousands of protesters arrested in Los Angeles over alleged curfew and failure to disperse violations during protests over George Floyd's death will not be charged, prosecutors announced Monday....
Read more

"Beijing will not turn into a second Wuhan," one city official has vowed amid fears of a possible 2nd wave of coronavirus infections.
Read more

CNN says it will host a "drive-in town hall" with Democratic presidential nominee Joe Biden on Thursday night, which the network calls "the latest adaptation to campaigning during the coronavirus pandemic."The form...
Read more

The Memo: Trump struggles to get traction with law-and-order...

President Trump ramped up his efforts to portray himself as a hard-line law-and-order president Wednesday — but it’s a gambit that has not worked so far.Trump is betting that voters will eventually rally around his attacks on a “radical left” that&...
Read more

Converse signs its first endorsement deal with a female...

Footwear and athletic gear maker Converse has signed its first female basketball player to a sponsorship deal.The company announced Monday on Twitter it is "proud and humbled" to welcome 28-yeah-old Natasha Cloud of the Washington Mystics...
Read more

Skirmishes between China and India ignited new tensions among the world's two largest populations and sparked fears of a wider conflict between two major, nuclear-armed powers in Asia.
Read more

A NASCAR driver raced in a ‘Back the Blue’...

The car was painted with a "Thin Blue Line" flag on the hood, considered to be a symbol of the "Blue Lives Matter" movement. The car debuted the same week that black driver Bubba Wallace drove a Black Lives Matter-themed car.
Read more

The Trump administration's nearly $2 billion investment in Pfizer and a smaller German biotechnology company for a coronavirus vaccine is raising eyebrows among lawmakers and drug pricing advocates....
Read more

Stationary company Yoobi, known for their colorful school supplies, is providing everything from pencils to folders for students in need across the U.S. Yoobi is available at Target, and pledges to donate an item for every item bought off the shelves. Even ce…
Read more

The agreement would deliver millions of doses that the U.S. would provide to the public free of charge. Pfizer has four vaccine candidates and will begin phase three human trials within days.
Read more

Mother of Javier Ambler's sons: 'Your children do not mean more than...