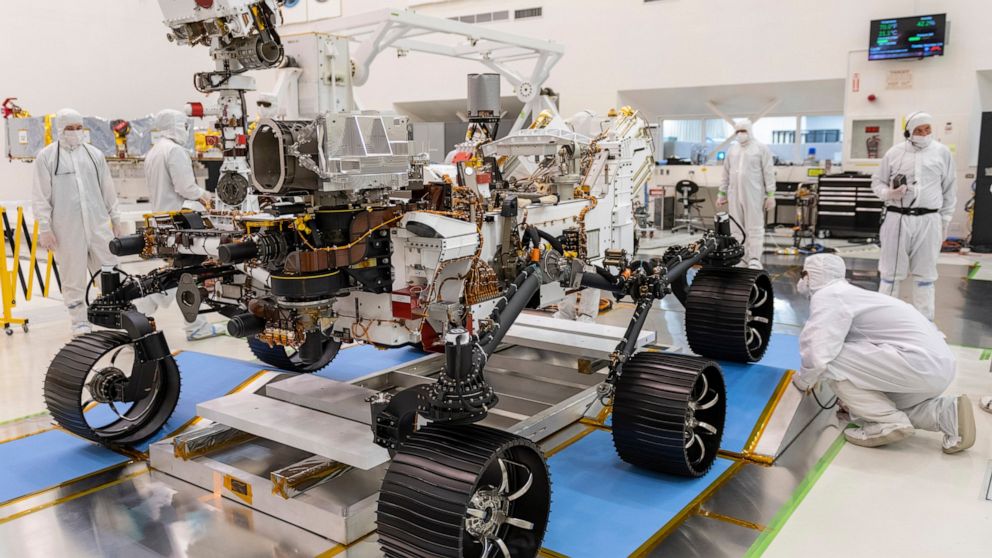 NASA has delayed the launch of its newest Mars rover yet again to the end of July at the earliest this time for a rocket issue.

If the Perseverance rover isn’t on its way by mid-August, it will have to wait until 2022 when Earth and Mars are back in proper alignment, costing NASA close to $500 million for the delay alone.

Managers are now targeting no earlier than July 30 for a liftoff from Cape Canaveral, eating up half of the monthlong launch window. The good news is that NASA is trying to eke out more time in this summers launch opportunity, now lasting until at least Aug. 15. The chance to fly to Mars comes up only every 26 months.

It is NASA’s most ambitious Mars mission yet, totaling around $3 billion. Besides seeking signs of past microscopic Martian life, Perseverance will gather rocks and soil for eventual return to Earth.

Rocket maker United Launch Alliance needs extra time to deal with a liquid oxygen sensor line that showed questionable readings during a recent practice countdown, officials said Tuesday. Previous technical concerns including crane trouble at the pad bumped the launch from the original July 17 to the 20th and then 22nd.

Perseverance will still attempt a touchdown next February in an ancient river delta at Mars, regardless of when it launches.

The United Arab Emirates and China, meanwhile, still are pressing ahead with launches this month or next of Mars spacecraft. Russia and the European Space Agency had to bow out, delaying their Mars rover until 2022 because of delayed spacecraft testing and travel limitations due to the coronavirus pandemic.

The Associated Press Health and Science Department receives support from the Howard Hughes Medical Institutes Department of Science Education. The AP is solely responsible for all content.

Coroner Joe McCrisken says there is also no evidence any other person was involved in the teen's death.
Read more

Trump claims not to be following Maxwell case despite...

Telecom giant is latest to come on board "#StopHateforProfit" campaign targeting Facebook for content widely seen as racist and inciting violence.
Read more

A man who provided massages for female athletes at the University of Kansas is facing six new misdemeanor charges of sexual battery.
Read more

A rare edition of The Two Noble Kinsmen was found in a volume dating from 1634.
Read more

A massive explosion rocked Beirut on Tuesday, with multiple videos on social media showing a large plume of smoke rising over the city following a blast.There were no immediate reports deaths or injuries, ...
Read more

Re-live England's 1-0 win over Argentina at the 2002 World Cup as England avenged painful defeats to the South Americans at Mexico 86 and France 98.
Read more

Surprise! Taylor Swift is releasing a new album this week, one she wrote and recorded entirely in isolation.
Read more

South Africa’s health minister Dr. Zweli Mkhize has announced that he and his wife have tested positive for COVID-19 and warned of a possible resurgence of the disease in the country
Read more

We Good?: At Matchmaking (VIDEO)

Brooke Fletcher and Devin Gardner are on a mission this week.
Read more

As Covid-19 worsens the economic slump, Indians are returning to a trusted asset: gold.
Read more

Two teenagers left on one of the last flights...

Arpy Kardashian sleeps with the phone under her pillow so she doesn't miss a call from her children. She's in Armenia, they're in Australia.
Read more

Shut down the country and start over to contain...

More than 150 prominent US medical experts, scientists and others signed a letter to political leaders urging them to shut down the country and start over to contain the surging coronavirus pandemic.
Read more

Lebanese bride Israa Seblani was lucky to escape unharmed after her wedding photoshoot was interrupted by a massive explosion in Beirut on Tuesday.
Read more

Beyond Trump vs. Trump: We Have a Nation to...

Mary Trump's shoddy attempt at psychoanalysis may, despite its flaws, point to worthwhile considerations. The post Beyond Trump vs. Trump: We Have a Nation to Safeguard appeared first on The American Conservative.
Read more

Kentucky doctor who urged mask-wearing early on dies after...

A Kentucky doctor who urged people to wear masks early on in the coronavirus pandemic died after battling the disease for four months.
Read more

Bars and restaurants will also have to close early as the number of infections continues to rise.
Read more

Trump: Black Lives Matter mural in NYC a 'symbol of hate' that...