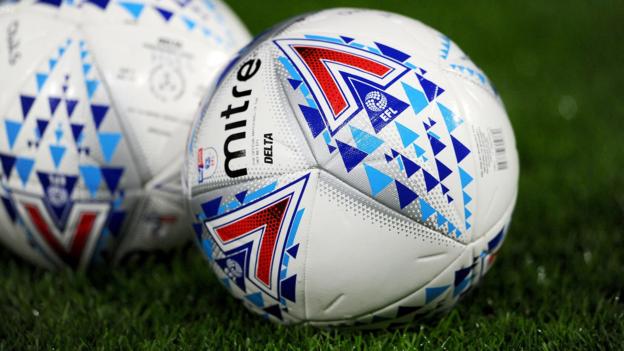 The latest round of coronavirus testing in the English Football League has again returned no positive results.

A total of 3,498 players and club staff from the Championship and League One were tested over the past week.

No League Two tests were carried out as the 2019-20 season concluded following Northampton’s win against Exeter in the play-off final on 29 June.

It is now two weeks since three individuals from two Championship clubs tested positive for coronavirus.

A judge found Michael Cohen's re-arrest to be in retaliation for a book critical of Donald Trump.
Read more

Food delivery driver allegedly drove into woman after being...

Chicago police filed felony charges against a food delivery driver who was allegedly caught on video driving his car into a woman during an argument over social distancing, according to ...
Read more

Cuomo says racetracks can reopen in June as virus...

He avoided injury in the first crash, despite the car's engine block being thrown about 100m.
Read more

‘A League of Their Own’ inspired baseball pioneer Croteau

The Dimensity 720 SoC from MediaTek is out and is the first chipset in its series to be built with 7nm process. It is also one of the cheapest SoC offering 5G connectivity
Read more

Bernie Sanders is embracing former President Barack Obama in a new video that underscores the Vermont Independent's need to win over black voters.The video, which shows the former president with his arm around Sand...
Read more

Prince Harry and Meghan Markle Call in Police Over...

The Duke and Duchess of Sussex have reported a string of drone attacks thought to be by paparazzi photographers at Tyler Perry's $18 million mansion, where they are staying.
Read more

In Vermont, an immigrant city races to tamp down...

After months of having some of the fewest coronavirus cases in the country, Vermont is now trying to contain an outbreak that has hit an immigrant community in a small but densely populated city
Read more

One victim was duped into sending nude photographs to someone she later found out was an adult.
Read more

The condition has features of Kawasaki disease, a rare but serious illness first connected to coronavirus in the U.K.
Read more

They were confronted by fellow ferry passengers and NYPD officers Saturday night after refusing the captain's orders to either wear a mask or find another way home.
Read more

House Speaker Nancy Pelosi on Sunday dubbed President Trump "Mr. Make Matters Worse," bestowing him with the new nickname over his handling of the coronavirus pandemic."This president, I have a new name for him, Mr...
Read more

A responding NYPD missing persons detective sergeant during the September 11th attacks is sharing his story. Keith Taylor spoke on CBSN with what he remembers from the day, and his message to Americans now.
Read more

Chinese envoy says Australia betrayed China for US on...

President Trump's move to close the Chinese consulate in Houston, Texas, is the latest escalation between Washington and Beijing, whose relations have spiraled at a dizzying pace since March as the novel coronavirus pande...
Read more

The lawmaker also told Fox News that it was "now or never" for the U.S. to change its relationship with China.
Read more

Americans tune in to ‘cancel culture’ — and don’t...

As Donald Trump seizes on it and elite journalists obsess over it, a POLITICO/Morning Consult poll shows significant concern about the practice.
Read more

Eagles player apologizes over anti-Semitic post: ‘I do not...

Philadelphia Eagles player DeSean Jackson apologized Tuesday after sharing an anti-Semitic message that was attributed to Adolf Hitler earlier this week.Jackson shared an image to his Instagram stories on Monday th...
Read more

Trump lashes out at scientists whose findings contradict him

The baseball players' association gave MLB a wide-ranging response to a 67-page proposed set of protocols for play amid the coronavirus pandemic.
Read more

Everything you need for a bug-free summer outdoors

We asked experts about all the various repellants you can use to make sure bugs — and particularly mosquitos — stay far away from you this summer.
Read more

The Russian opposition figure is off ventilation and continues to improve, his Berlin hospital says.
Read more

Mother of Javier Ambler’s sons: ‘Your children do not...

Almost 15 months after Javier Ambler, a black man, died while being arrested, his ex-partner and the mother of two of his sons has a message for law enforcement and the world.
Read more

Hawaii Gov. David Ige extended the state’s mandatory 14-day quarantine for all arriving travelers on Wednesday in a bid to keep coronavirus cases in the islands low
Read more

The White House and Senate Republicans on Thursday reached a "fundamental agreement" on a coronavirus package, according to a top negotiator.Treasury Secretary Steven Mnuchin - after a meeting with Senate Majority...
Read more

Bill Hemmer On Covering The Biggest Story Of Our...

It's been over two months since the US shut down its economy to try and flatten the curve of the coronavirus outbreak. Now states are slowly starting to reopen and attempt to get back to normal. But, there is some debate about whether it's "too soon" to open …
Read more

Lawyers summing up at Depp’s libel trial against UK...