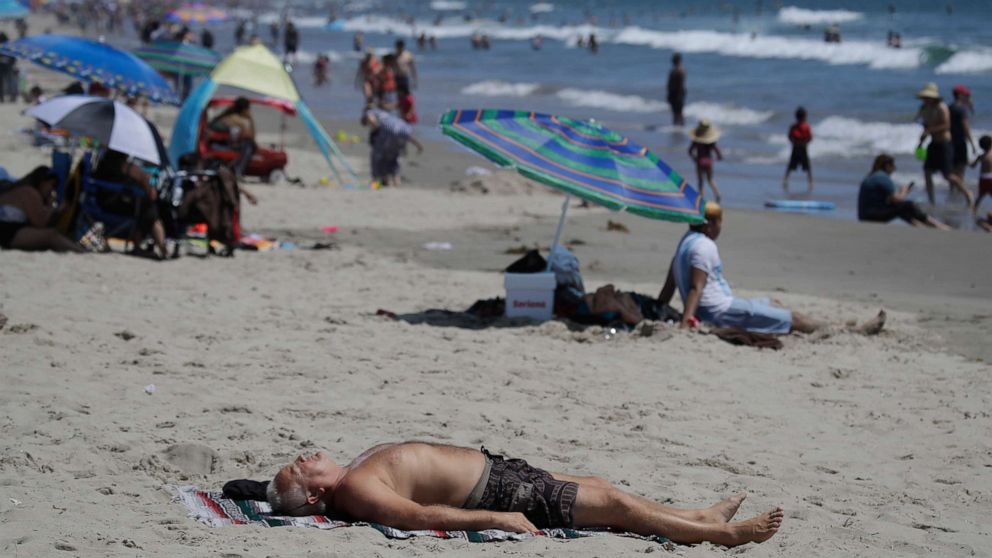 Historic heat across the South continues today with San Antonio, Texas hitting 107 degrees, the hottest temperature ever recorded in the city in the month of July.

In Del Rio, Texas, temperatures reached a whopping 112 degrees which tied the hottest temperature ever recorded in the citys history.

In New Orleans, a daily record high was broken yesterday when the city reached 99 degrees but, with humidity, the heat index reached 118 degrees.

Today, 10 states from New Mexico to Florida are under Heat Advisories and Warnings where the heat index could top 110 degrees with actual temperatures approaching 100 once again.

In the West, gusty erratic winds helped spread wildfires from California to Colorado.

In Evergreen, Colorado, the Elephant Butte Fire forced evacuations of more than 1,000 homes and the fire is currently 0% contained.

In southern Utah, the Veyo West Fire has burned 1,184 acres and is also 0% contained. There were evacuations yesterday but, as of this morning, it was lifted!

In Fresno County, California, the Mineral Fire burned 1,000 acres and is currently 0% contained with evacuations in effect and structures threatened.

Red Flag Warnings and a Fire Weather Watch has been issued from California to Colorado.

The biggest threat is erratic winds from thunderstorms and outflow boundaries that could spread fires very quickly and change the direction in which they are burning.

The high heat and dry vegetation is not helping to fight these fires but, thankfully, the extreme heat is beginning to subside.

Yesterday, severe storms moved through the Northeast, the Carolinas and the Plains and brought damaging winds of 60 to almost 90 mph along with large hail.

Today, severe weather is expected mostly from the Great Lakes to the western Plains.

With no universal playbook for virus testing, each sport...

There is no universal playbook for coronavirus testing in professional sports, but there's plenty of common ground.
Read more

China and the European Union are pushing President Trump to restore funding to the World Health Organization (WHO) after he announced late Tuesday that financial support would be halted pending a review of its response to the coronavirus pandemic....
Read more

Trump says Liz Cheney ‘only upset’ because he’s getting...

President Trump on Thursday said GOP Rep. Liz Cheney is “only upset” because his administration has been getting the U.S. out of “ridiculous and costly Endless Wars,” after she criticized his handling of the coronavirus pandemic and other issues.
Read more

President Trump is standing by his decision to downplay the threat of the coronavirus in the early days of the pandemic, saying he was trying to avoid panic. CBS News White House correspondent Paula Reid joins CBSN to talk about the fallout from audio recordi…
Read more

Sending in 150 federal agents to help a police force of 13,000 won't help much, but giving federal attention to the gun dealers that supply so many crime guns in Chicago, and helping equalize funding in grievously underserved school districts in poorer commun…
Read more

‘Air of calmness’ is promised for ‘Killing Eve’ new...

When we last saw the character Eve Polastri, she was crumpled on the stony ground of some ancient Roman ruins
Read more

The proclamation will suspend several guest worker programs, including H-1B visas for those in specialized fields like the technology sector.
Read more

Google is giving Chrome users a way out of...

If you work with huge numbers of tabs, this feature will be a lifesaver.
Read more

Top Tweets: Packers get a leg up in training...

FOX Sports Wisconsin compiles the top tweets and Instagram posts from the past week of Wisconsin sports.
Read more

The body of the missing Fort Hood soldier was found in Temple, Texas, on Tuesday evening after he was reported missing more than a week ago, the family's attorney announced in a statement.Natalie Khawam, the ...
Read more

Whether Bubba Wallace wins a race or not, he will have a strong legacy in NASCAR after the last four days and the banning of the Confederate flag.
Read more

This Life-size Gundam Robot Built in Yokohoma, Japan is...

Jason Servis, the trainer of Saudi Cup winner Maximum Security, is among 27 people charged in the USA over the alleged doping of horses.
Read more

The rate of kids sports and recreation-related emergency room visits for traumatic brain injuries declined 32% from 2012 to 2018, after more than a decade of increasing rates, a new study finds.
Read more

“I have learned to my deep regret that a voice of the struggle has been silenced," said Mexico's Interior Secretary. Chavez's folk songs lampooned the political elite.
Read more

Progressives are throwing their political might behind Holyoke, Mass., Mayor Alex Morse’s bid to unseat Rep. Richard Neal (D-Mass.), one of the most powerful Democrats in the House.In the days leading up to the Sept. 1 primary in Massachusetts’ 1st...
Read more

Michigan secretary of state responds to Trump: ‘We sent...

Michigan Secretary of State Jocelyn Benson responded to President Trump after he threatened to withhold federal funding to the state over officials mailing out applications for absentee ballots.President Trump twee...
Read more

#RIPJKRowling trends as critics take issue with novel's serial killer character, a cisgendered man who dresses as a woman to stalk his victims.
Read more

“Mank” and the writer behind “Citizen Kane”

Bruno Dey, 93, was handed a two-year suspended prison sentence by a court in Hamburg.
Read more

The University of California (UC) announced Michael V. Drake as the new president of the university system in a meeting on Tuesday.
Read more

Twitter said on Wednesday that the hackers who breached its systems last week likely read the direct messages of 36 accounts.
Read more

Dont know much about the keto diet? Well, for starters, its extremely popular and a favorite of celebs like LeBron James, the Kardashians...
Read more

Trump confirms he wants to pull thousands of U.S....