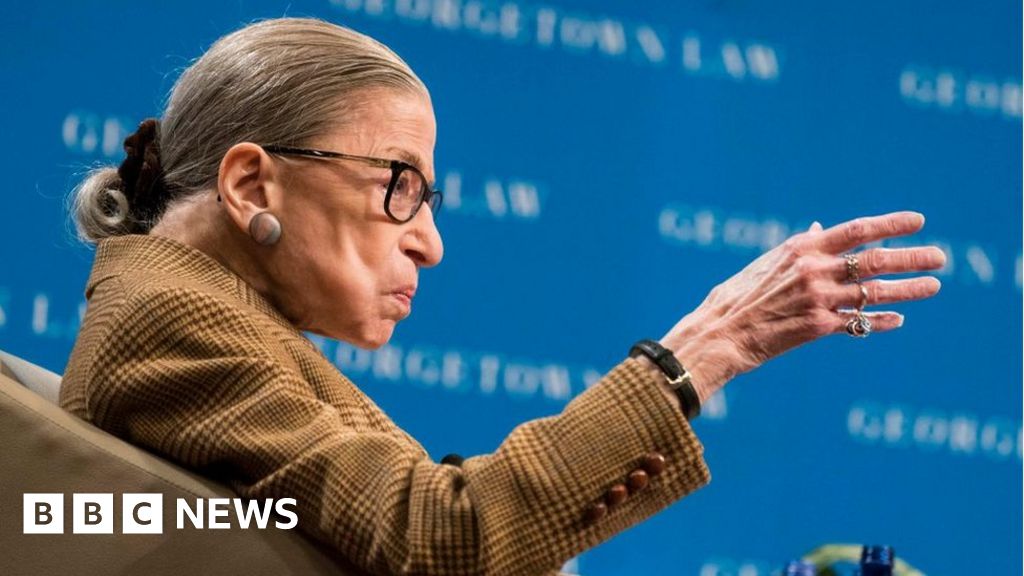 Ruth Bader Ginsburg is the court’s most senior liberal justice, and her health is closely watched

US Supreme Court Justice Ruth Bader Ginsburg has been taken to hospital in Maryland “for treatment of a possible infection”, the court has said.

It said in Baltimore’s Johns Hopkins Hospital she “underwent an endoscopic procedure… to clean out a bile duct stent that was placed last August”.

Ms Ginsburg, 87, was “resting comfortably” and would stay in the hospital for a few days.

As the court’s most senior liberal justice, her health is closely watched.

She has received hospital treatment a number of times in recent years, but has returned swiftly to work on each occasion.

In May, she took part in legal argument from her hospital bed, just a day after she was admitted with a gallbladder condition.

In August 2019, Ms Ginsburg was treated for a cancerous tumour on her pancreas. She received treatment for colon cancer in 1999, and pancreatic cancer in 2009.

And in December 2018, she had surgery to remove two cancerous nodules from her lung. She has also suffered fractured ribs from falls.

Supreme Court justices serve for life or until they choose to retire, and supporters have expressed concern that if anything were to happen to Ms Ginsburg then a more conservative judge might replace her.

President Donald Trump has appointed two judges since taking office, and the current court is seen to have a 5-4 conservative majority in most cases.

The U.S. economy grew at a record 33.1% annual rate in the July-September quarter but has yet to fully rebound from its plunge in the first half of the year — and the recovery is slowing as coronavirus cases surge and government aid dries up
Read more

Get rewarded by staying away from digital devices while...

Why are there so few ethnic minority MSPs?

With an election on the way in 2021, will Holyrood's record of BAME representation improve?
Read more

"As partners in this Quad, it is more critical now than ever that we collaborate to protect our people and partners from the CCP's exploitation, corruption, and coercion," Secretary of State Mike Pompeo said alongside Australian, Indian and Japanese officials.
Read more

The Swords of Justice will appear in Raids during the event.
Read more

Michael Cohen will be released back to home confinement after a judge ruled the federal government retaliated against him over a tell-all book about the president.
Read more

The data official behind Florida's Covid-19 dashboard says she has launched her own dashboard after being removed from the state's project.
Read more

NASA spacecraft sends back images of stars from 4.3...

NASA's New Horizons spacecraft has captured images of nearby stars from its unique vantage point 4.3 billion miles from Earth — and the stars appear to be in different positions than where we see them from Earth.
Read more

"Seriously, you know how nuts you have to be when Rudy Guiliani's head starts leaking and you're the one who gets fired," Fallon joked Monday night.
Read more

Personal service locations like hair salons will not yet be permitted to reopen, and dining in at restaurants still won't be allowed.
Read more

The Senate Foreign Relations Committee will hold a vote this week on President Trump's nominee to lead the U.S. Agency for Global Media, despite an ongoing investigation.According to a schedule released by Committe...
Read more

A fantastic laptop deal - you can score a $400 price cut on the XPS 13 laptop at Dell's semi-annual sale.
Read more

Twitter has applied warning labels to more than a third of President Donald Trump’s tweets since the final polls closed Tuesday evening, reflecting how Trump and his allies continue to spout misinformation on social media days after Americans cast their ballo…
Read more

Rep. John Lewis to be carried across Edmund Pettus...

Celebrations of the life of Rep. John Lewis, D-Ga., continue Sunday morning, the second of six days honoring the late civil rights icon who died at the age of 80 on July 17 after a battle with pancreatic cancer.
Read more

Two Russian doctors dead, one injured after falling from...

Two Russian doctors who have treated coronavirus patients died in falls from hospital windows and a third was seriously injured in the last two weeks.Police are continuing to investigate the circumstances of the in...
Read more

For the first time since 2010, a team with Scherzer as its starter won't be favored at home.
Read more

EU to slap sanctions on Russia officials over Navalny...

What Kawasaki Disease can tell us about the new...

Disease discovered in Japan in the 1960s has helped doctors treat the new syndrome in children linked to COVID-19, and the learning may go both ways.
Read more

This week, Scott Pelley goes to Ohio to ask voters where they stand in this year's election. Here's what they said in 2016.
Read more

Brian Morgenstern: Amy Coney Barrett Is Being “Attacked By...

5-year-old Pennsylvania girl with autism dies after wandering off...

A 5-year-old girl with autism, Eliza Talal, ventured off during the height of the Tropical Storm Isaias in Pennsylvania. She was found dead Wednesday.
Read more

Zarude Coming to ‘Pokémon Sword and Shield’ in December;...

The next Pokémon animated film, starring Zarude, will release in 2021.
Read more

Daimler AG to pay $1.5B to settle emissions cheating...

What Trump’s suspension of coronavirus aid talks means for...

Here’s the first thing which was asked on Capitol Hill when President Trump put the kibosh on the coronavirus aid talks: Why did the President make such an announcement when the market was open?
Read more

Five members of an alleged Chinese hacking group have been indicted for their role in a scheme to hack into more than 100 companies in the U.S., the Justice Department said.
Read more

Apple apparently hasn't even finalized the design of the iPhone 12 yet, putting it a month or two behind schedule.
Read more

Broncos’ Fangio on slowing down Mahomes: ‘Nobody has broken...

There may be a specific code to solving Patrick Mahomes and the Kansas City Chiefs’ high-powered offense. But good luck guessing it.
Read more

A message for President Donald Trump from his niece: 'Resign'