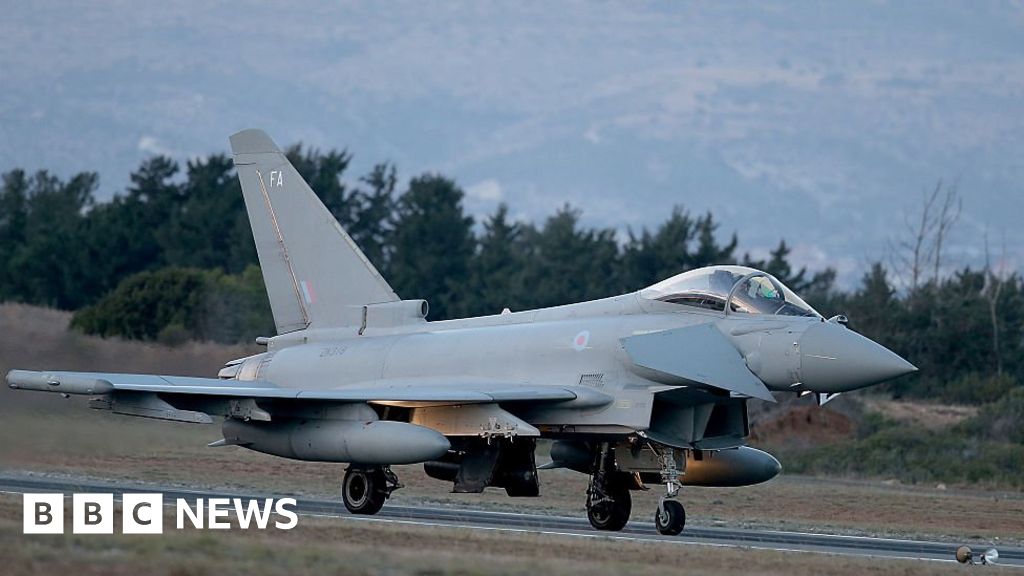 The RAF has continued to target IS fighters in 2020, the defence secretary told MPs

The Islamic State group (IS) remains the “most significant” threat to the UK, the defence secretary has warned.

Ben Wallace said the militant group’s “poisonous ideology” endures despite it having lost territory it once held in Syria and Iraq – and a possible resurgence “should concern us all”.

British aircraft have struck 40 targets as part of the fight against IS in the past year, Mr Wallace told MPs.

Making a statement to the House of Commons, Mr Wallace said RAF strikes had hit 40 targets since July 2019. Targets ranged from caves in remote parts of northern Iraq, to weapons bunkers and training camps, he said.

“RAF aircraft have continued to patrol the skies on an almost daily basis,” he said.

Members of the group have “nowhere to hide”, he said, but added that the group’s “poisonous ideology” still endures.

“Daesh retains its intent to carry out and inspire attacks against us, and remains the most significant terrorist threat to the United Kingdom and our interests,” he said.

“Conflict, economic collapse and inequality is creating new opportunities that they will continue to exploit, to grow and recruit.”

About 900 people who joined the group as fighters during the conflict came from the UK, MPs were told.

Mr Wallace said of those, about 20% had been killed and around 40% remain in the area, either at large or in detention.

The remaining 40% – an estimated 360 people – have returned to the UK, “where they have been investigated and the majority assessed now to pose no risk or a low security risk”, he said.

The House passed a bill on Thursday to accommodate and protect pregnant workers in a 329-73 vote.The Pregnant Workers Fairness Act (PWFA) was introduced by Rep. Jerry Nadler (D-N.Y.) and would require employers to...
Read more

Trump says Harris was ‘my number one pick’ for...

Giuliani Says He Was Tucking in Shirt After Removing...

The former New York City Mayor suggested the scene may have been "doctored" or "manipulated."
Read more

IndyCar goes virtual racing as it waits to get...

Three House Democratic chairs are calling for government watchdogs in the Trump administration to investigate the use of federal force against recent protests over police brutality and racial inequality. ...
Read more

The White House didn't want to spend new money on coronavirus testing with billions in funds still leftover. President Donald Trump and his education secretary warned schools they wouldn't get money if they didn't fully reopen. And Trump even suggested he wou…
Read more

After chaotic debate against Trump, Biden said his performance was “a national embarrassment” and wants changes to force him to play by the rules next time.
Read more

Trump talks down virus as his properties face possible...

President Donald Trump has pulled from decades of experience as a businessman in his response to the coronavirus as he focuses on the economy and urges people to continue traveling and patronizing U.S. businesses
Read more

Sugababes star Keisha Buchanan opens up about experiences of...

Keisha Buchanan fell victim to the trope of the "angry black woman" during her time in the band.
Read more

These Samsung 4K TV deals are seeing prices as...

You don't need to break the bank to upgrade this week, thanks to the latest Samsung 4K TV deals.
Read more

Amid coronavirus, entrepreneurs in Cuba reinvent to survive

One local cosmetics company decided to start making their previously imported products as they try to fill the gap for scarce items.
Read more

Stocks edge lower in early trading as a market...

How Meghan Markle and Prince Harry Biography Compares to...

Meghan Markle and Prince Harry's inner circle have contradicted claims in the press about the couple in new biography "Finding Freedom." Here's how the two accounts stack up.
Read more

Tesla is more valuable than Coca-Cola, Disney and ExxonMobil. Now, after four consecutive profitable quarters, the electric carmaker is eligible to join the S&P 500 index — a step that could turbocharge the index of America's top companies.
Read more

‘Trial by Media’ Explores The True Story That Inspired...

Everything you need to host a beautiful, socially distant...

Its a weird time for a lot of things, and weddings are no exception. While you may have dreamed of having hundreds of...
Read more

A newly declassified memo shows that a high-level U.S. Department of Defense official strongly suspected then Colombian President Álvaro Uribe had a history of dealings with violent paramilitaries
Read more

COVID has decimated the ranks of the 9/11 first responders, many of whom were already ailing from cancer and other diseases they developed after months of working at ground zero.
Read more

Midland County in Michigan is under a state of emergency Wednesday morning after two dams burst open, following days of heavy rain and rising water. About 10,000 people are being told to evacuate. Adriana Diaz reports.
Read more

President Donald Trump faces broad disapproval for his handling of the coronavirus pandemic, according to a recent poll.
Read more

Clinton and Patterson again team up for political thriller

The number of people hospitalized in Texas from the coronavirus increased for the 15th consecutive day, surpassing 5,000 for the first time.
Read more

Real estate is a seller's market as sales soar by 21 percent...