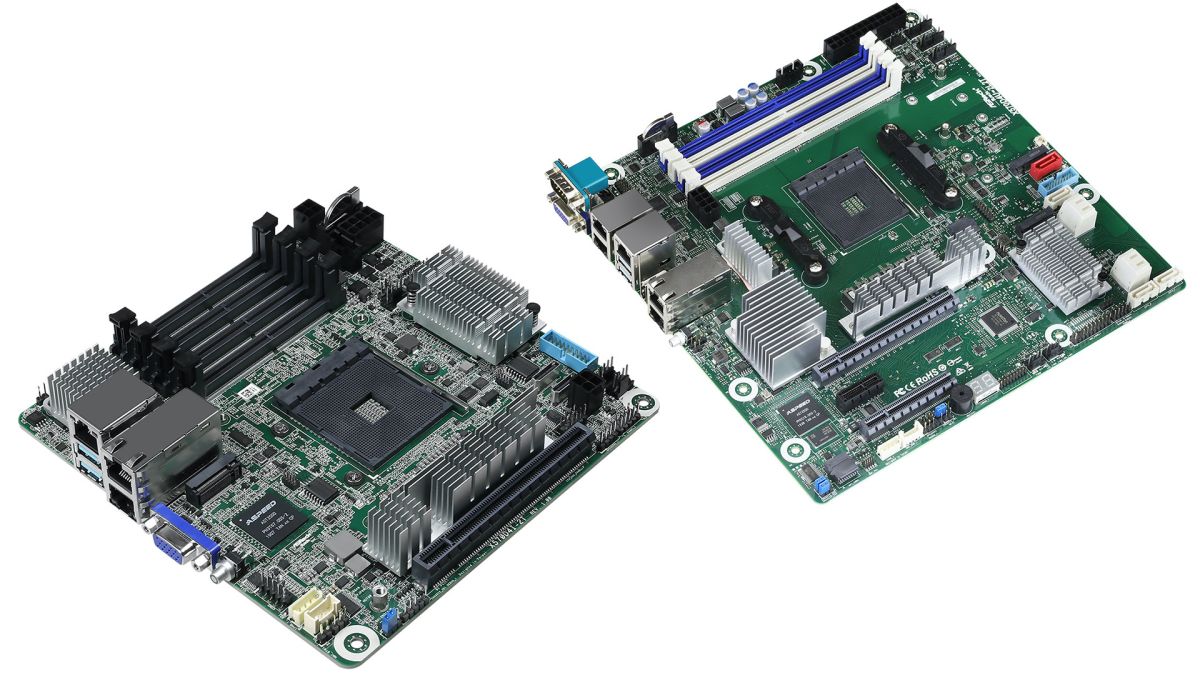 ASRock Rack has introduced two motherboards based on AMDs X570 chipset and designed for the companys Ryzen processors with up to 16 cores.

Both platforms can be used to build compact NAS, servers or workstations so they are equipped with a baseboard management controller (BMC) as well as two 10GbE ports powered by a controller from Intel.

ASRock Racks X570D4I-2T and X570D4U-2L2T motherboards feature an AM4 socket that supports AMD Ryzen processors with up to 105 W TDP, four memory slots supporting up to 128 GB of DDR4 SDRAM with or without ECC, a PCIe 4.0 x16 slot for graphics cards or ultra-fast enterprise-grade SSDs, an OCulink port to support multiple Serial ATA connections, Intels X550 controller that handles two 10 GbE ports as well as the Aspeed ASP2500 BMC paired with a dedicated GbE port (controlled by the Realtek RTL8211E) for remote management.

The smaller Mini-ITX X570D4I-2T is designed for ultra-compact systems, yet it has an OCulink port that can support up to eight SATA storage devices (so, up to 144 TB of storage space when 18 TB HDDs are used) as well as an M.2-2280 slot for PCIe 4.0 x4 or SATA SSDs.

With support for up to 12 SATA drives and at least three high-end SSDs with a PCIe 4.0 interface, the ASrock X570D4I-2T can enable devices with rather formidable storage capacity and extreme performance.

ASRock Racks X570D4U-2L2T and X570D4I-2T motherboards are listed at the companys website, so expect them to hit the market shortly. Given positioning of the platforms and enterprise-grade 10 GbE ports, expect them to be priced accordingly.

Some of the most dramatic cuts to athletics so far by an NCAA school have been made by St. Edward's University
Read more

PMQs: Blackford and Johnson on surcharge for foreign NHS...

The prime minister is accused of "giving with one hand and raking it in with the other" over NHS staff.
Read more

Fauci responds to ‘mischievous’ critics of photo at Nats...

Anthony Fauci, the nation's leading infectious disease expert, responded to criticism stemming from a photo of him with his mask pulled down during a Washington Nationals baseball game, calling the attacks "mischievous."...
Read more

Drug manufacturer Gilead received emergency FDA authorization for their drug, remdesivir, to be used for COVID-19 treatment. Also, Canada has banned assault-style weapons less than two weeks after the country's deadliest mass shooting. All that and all that m…
Read more

President Donald Trump joined in attacks on Rep. Liz Cheney, R-Wyo., saying that she’s “only upset” because he has been trying to end U.S. involvement in wars overseas.
Read more

The Supreme Court on Monday said it would not take up the Catholic church's challenge to the Washington, D.C. transit authority's policy banning religious ads, allowing the policy to remain in place.
Read more

If Congress Wants the War in Afghanistan, Trump Should...

The president would be well within his powers to bring American troops home if Congress still refuses to declare war. The post If Congress Wants the War in Afghanistan, Trump Should Force them to Authorize It appeared first on The American Conservative.
Read more

Before everything closed, 30 NFL draft prospects showcased their talents in a “virtual” pro day at TEST Football Academy in Martinsville, N.J.
Read more

KT McFarland: Why ‘nothing makes sense’ about the Susan...

"There are a lot of pieces in this puzzle and they’re all starting to come together," said former deputy national security adviser KT McFarland.
Read more

Ronan Farrow on Wednesday fired back at Matt Lauer's accusation that he had practiced "shoddy journalism" when reporting on sexual allegations against the former "Today" show host in 2018, stating that Lauer "is just wron...
Read more

A year after India ended disputed Kashmir's semi-autonomous status and downgraded it to a federally governed territory, authorities have begun issuing residency and land ownership rights to outsiders for the first time in almost a century
Read more

Trump to sign order preventing illegal immigrants from being...

President Trump on Tuesday will sign an executive order to prevent illegal immigrants from being counted for the purposes of re-drawing congressional districts after the 2020 census.
Read more

Chinese official: US is ‘breaking down the friendship bridge’

Beijing has promised to retaliate to the Houston consulate closure, with Chinese state media pointing to the potential shuttering of one of the US' numerous diplomatic missions within China. CNN's David Culver reports.
Read more

Congressman Mike Gallagher (R-WI/8) calls on speaker Pelosi to reconvene Congress so there can be debate and amendment in the process of crafting funding for the Paycheck Protection Program (PPP) as well as future Coronavirus relief Legislation. Saying there …
Read more

Google says it will no longer build custom artificial intelligence tools for speeding up oil and gas extraction, separating itself from cloud computing rivals Microsoft and Amazon.
Read more

A groups of investors is concerned the social network could become a haven for child exploitation.
Read more

Hurricane Douglas could hit Hawaii this weekend with wind and rain