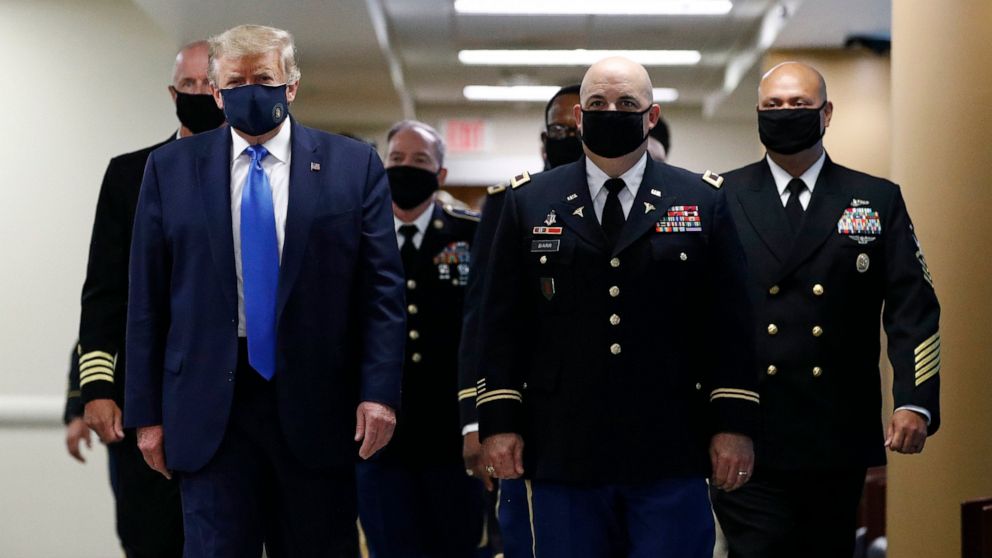 The global tally of people infected with the coronavirus neared 15 million Wednesday, while in the worst-hit pandemic hot spot of the United States, President Donald Trump warned the pandemic would get worse before it gets better.

With COVID-19 set to pass another shocking milestone, Trump delivered his first virus briefing after a three-month hiatus, offering a shifted message Tuesday, including professing a newfound respect for the protective face masks he has seldom worn.

It came as polls have shown Trump lagging behind Democratic rival Joe Biden ahead of Novembers election, and as the count of virus fatalities in the U.S. passes 140,000.

Even so, the president worked in jabs at the news media and Democrats, and repeatedly referred to COVID-19 as the China virus.

The early evening show at the White House came as the next stage of the federal governments response to the pandemic was being crafted on Capitol Hill.

The price tag for the next COVID-19 aid package could quickly swell above $1 trillion as White House officials negotiate with Congress over money to reopen schools, prop up small businesses, boost virus testing and keep cash flowing to Americans.

Senate Majority Leader Mitch McConnell promised a new round of direct payments to earners below a certain income level, similar to the $1,200 checks sent in the spring. President Donald Trump insists on a payroll tax holiday for workers. And Democrats want billions to outfit schools and shore up local governments.

The proposed virus aid package would be the fifth, following the $2.2 trillion bill passed in March, the largest U.S. intervention of its kind. The jobless rate has remained in double digits, higher than in the last decades Great Recession, and a federal eviction moratorium on millions of rental units approved in the last bill is about to expire.

As the world case count neared the 15 million mark, with more than 617,000 killed, according to data from Johns Hopkins University, the U.S. has continued to see large outbreaks. New York, once by far the leader in infections, has now been surpassed the country’s largest state, California, for the number of cases, although that is party because of robust testing in the state. California had more than 409,000 infections, according to the Johns Hopkins count.

A cross-border "cluster" of coronavirus cases has been identified in Scotland and England.
Read more

After a mistrial the first time around, Norman Clark faces a new jury... with a new lawyer. Brittany's family prays for justice and closure.
Read more

Schumer calls for accountability in Daniel Prude death in...

Donald Trump Jr. says he inherited “Tourettes of the...

Donald Trump Jr. said in a recent interview that he has been told by his father to dial down some of his rhetoric on Twitter.In an excerpt of his interview with "Axios on HBO" that was released on Sunday, Axios co-...
Read more

How will you ever find the time to watch all of the movies coming to Amazon Prime Video next month?
Read more

How to Protect the Data on Your Laptop

Your laptop is a treasure trove of personal and sensitive information—make sure it's as secure as it can be.
Read more

McConnell: Too soon to know if GOP will hold...

Senate Majority Leader Mitch McConnell (R-Ky.) stopped short of declaring victory on Wednesday in the battle for the Senate majority, even as Republicans held off Democratic upsets in key races.
Read more

Last-minute trips to see friends and family before a four-week lockdown came into force across England may have led to a rise in cases, data suggests.
Read more

What a day on Mars will do: Californians have...

People who have devoted years to climate activism said in interviews that they believed this year’s devastating wildfires have become a turning point.
Read more

A feel-good ad from Facebook boasts a coronavirus group....

Teachers across the United States are preparing to welcome students back to the classroom. But as coronavirus cases rise, many worry that young children's excitement will quickly turn into fear.
Read more

Trump plans to return to campaign trail early next...

President Trump plans to take to the campaign trail again next Monday starting in Pennsylvania, just over a week after he was diagnosed with the coronavirus and taken to Walter Reed National Military Medical Center, Bloom...
Read more

“If I'm not going to be doing things or speaking out, then I should give this job to someone else,” Lieu told NBC Asian America.
Read more

EU faces knotty trade fights with US _ no...

WSL highlights: ‘You have to sit back & admire’...

Watch highlights as Jill Roord scores a hat-trick as Arsenal made a strong start to the new Women's Super League season with a thumping 6-1 win over Reading.
Read more

According to Oddschecker.com, Biden is currently the favorite to win the debate, to be held at Case Western Reserve University and the Cleveland Clinic, in Cleveland, Ohio.
Read more

Bids to stop GOP voters backing President Trump in November have gained momentum, though Republicans look to be shifting to the side of voting to re-elect him.
Read more

The United States has now surpassed 2 million confirmed cases of coronavirus. CBS News correspondent Laura Podesta reports on the latest, and Dr. Neeta Ogden joins CBSN to discuss where the new cases are increasing and why some hospital systems say they are d…
Read more

A Plan to Save Appalachia’s Wild Ginseng

American ginseng is imperiled by overharvesting. Locals are racing to preserve the plant—and its economic potential, through “forest farming.”
Read more