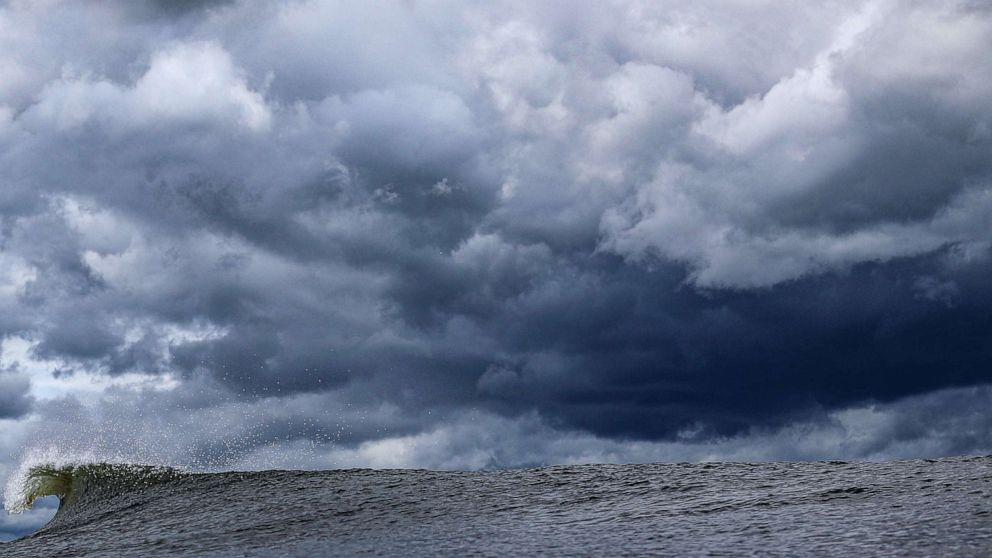 There are three systems from the Atlantic to the Pacific Ocean that could threaten the U.S. with tropical rain and wind.

Because this storm is expected to become Tropical Storm Hanna in the next 24 hours, a tropical storm watch has been issued from Houston to Corpus Christi, Texas, and down to near the Mexican coast.

More than 6 inches of rain is possible in some areas.

Tropical Storm Gonzalo is currently packing winds at 65 mph as it heads east toward the eastern Caribbean islands.

It is expected to become a hurricane later Thursday and continue strengthening as it nears Grenada, Barbados and Trinidad and Tobago by Saturday afternoon.

Hurricane force winds will reach near 80 mph with higher gusts possible. Flash flooding will be the biggest threat on these eastern Caribbean islands this weekend.

After that, it is still uncertain where Gonzalo will go from there and how strong it will be, but the latest path takes it south of Puerto Rico and the Dominican Republic Sunday night into Monday morning.

This is the first major hurricane of the season in the eastern Pacific.

It is expected to strengthen somewhat in the next 24 hours and then weaken as it heads for Hawaii.

The biggest threat in Hawaii will be flash flooding and mudslides this weekend.

NBA cuts ties with Xinjiang region over its treatment...

China is under fire worldwide for its repression of ethnic Uighurs and other minorities, mostly Muslims, in Xinjiang.
Read more

The season is scheduled to kick off on Thursday, Sept. 10 with the defending Super Bowl champion Kansas City Chiefs hosting the Houston Texans.
Read more

Chinese students in Australia are being scammed into faking...

Chinese students in Australia are being coerced by criminal gangs to fake their own kidnappings as part of an elaborate global extortion racket targeting vulnerable overseas communities, authorities said Monday.
Read more

This Day in History: May 20

The shark responsible for the attack was a blacktip—a species that can grow up to 6.5 feet in length.
Read more

Samsung will sanitize your phone for free using UV...

Some Samsung stores are offering a free sanitizing service to help clean your phone.
Read more

The 2020 sports season has been like no other, including the draft process. Here are up-to-date selections for each team.
Read more

Tucker Carlson: Obama should be known as a disgraced...

England have not forgotten about Black Lives Matter –...

The next attempt to launch will be Saturday afternoon, after weather conditions forced a delay.
Read more

Six Nations: Fiji claim they are ‘on the verge’...

Fiji claim they are on "the verge of joining the Six Nations" in November, though organisers say they will not join the main competition.
Read more

Acting Department of Homeland Security Sec. Chad Wolf blamed local officials in Portland for the violence and vandalism in the city that have followed the nightly protests following the death of George Floyd earlier this year.
Read more

The Orlando Magic continue their quest for the seventh seed in the East when they take on Ja Morant and the Memphis Grizzlies on Tuesday night.
Read more

Police say a truck has collided with a tram in the Swiss city of Zurich, leaving 14 people aboard the tram injured
Read more

Murphy urges attendees at Trump fundraiser in Bedminster to...

EU may block Americans from entering as it reopens...

The European Union may block Americans from entering its member countries as the bloc plans to reopen its borders on July 1 and the U.S. infection rate remains high, The New York Times reported Tuesday.The EU has produced two draft lists of...
Read more

Tayshia’s Ex-Husband May Crash ‘The Bachelorette’ According to a...

We know Adams's ex's name, so why is it featured in a promotion?
Read more

How to Watch, Live-Stream Trump Rallies in Michigan, Wisconsin...

Events kick off with Trump set to speak at 2 p.m. Central Time in Lansing, Michigan, at the Avflight building near the Capital Region International Airport.
Read more

Rickie Fowler, Jon Rahm & Tiger Woods shine on day two of the Masters - watch the best shots of the second round at Augusta.
Read more

Saturn’s largest moon is rapidly drifting off into space

Titan, which could support life, is quickly distancing from its host planet.
Read more

Trump announces surge of federal officers to several cities as part of...

Kim Kardashian and Kanye West have been considering divorce for weeks: reports