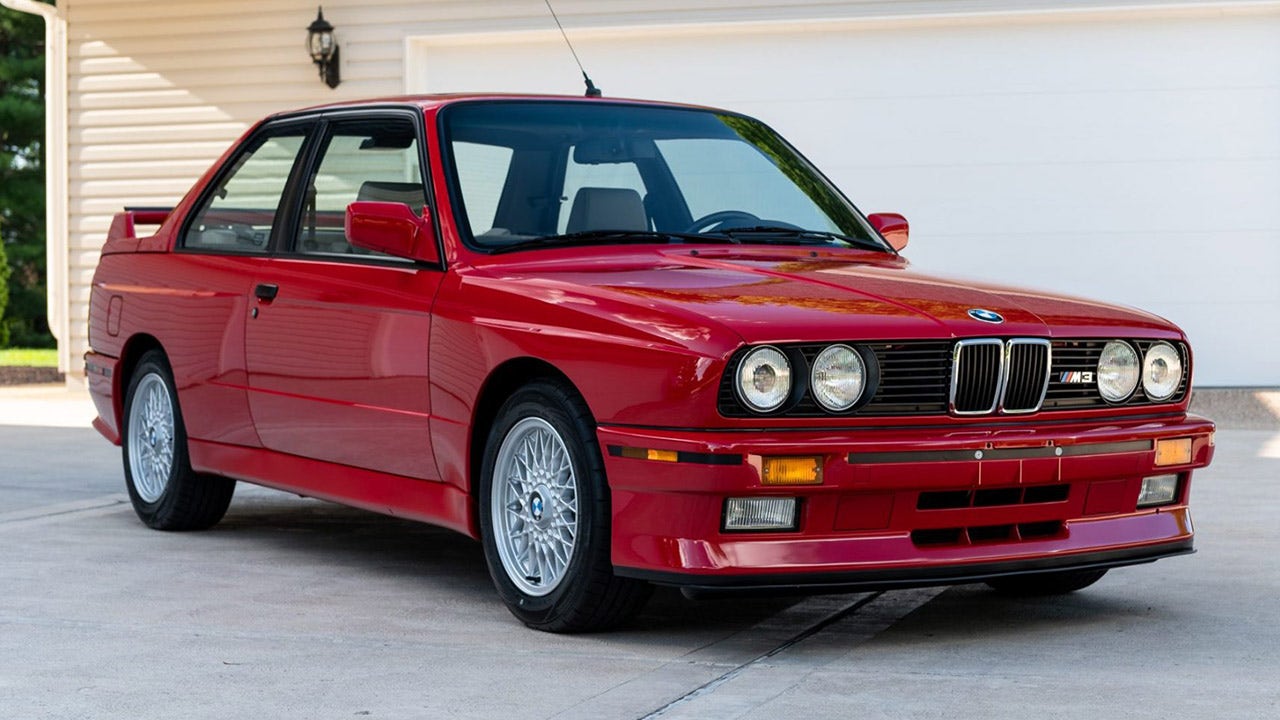 And some people think Tesla’s stock price is out of control.

The red coupe has 8,099 miles on it and recently went through thorough maintenance, but has had a fender repainted and was upgraded with a new performance rear spoiler or front splitter, though the originals were included in the sale.

With less than an hour left in the auction, the high bid was at $130,000, which is close to the top of the Hagerty Price Guide value range for the high-performance car, but then a bidding war escalated that ended with the final quarter-million bid.

The first-generation M3 has been increasing in price over the past few years as cars from its era become more popular on the collector car scene. This example was from the first year it was sold in the U.S., and only 5,115 were imported to the U.S. through 1992.

The M3 features a 192 hp 2.3-liter four-cylinder engine with a five-speed manual transmission and was initially offered in Europe to meet homologation standards for a German racing series. Over the years it has come to be considered one of the best BMWs ever made.

According to Hagerty, the average price for a typical M3 is currently $56,000, but that estimate was before this astonishing sale.

How did COVID show up in the bathroom of...

Chinese researchers say the discovery, and their subsequent flush-and-trace experiment, is evidence the coronavirus can travel through plumbing.
Read more

Joe Biden and Donald Trump Are Neck and Neck...

The poll, which was conducted by USA Today/ Suffolk University, found both Biden and Trump receiving 45 percent of votes among likely voters in Florida.
Read more

Egyptians wrap up voting for Senate seats with no...

Egyptian election authorities began counting ballots after polls closed in a vote for two-thirds of the seats in the newly restored but powerless Senate, the upper chamber of Parliament
Read more

Education secretary should be on the side of students

Betsy DeVos has been portrayed by Democrats as something of a villain — with comparisons made to even Cruella De Vil. It’s easy to think these attacks are hyperbole from a partisan cast of hacks intent on stopping her agenda.But her policies have...
Read more

Didn’t Watch the Debate? What You Missed in 2...

"I think young people right now have a very activist, disciplined mindset and they are not here with the intent of voting for their favorite person," Ocasio-Cortez said Sunday on CNN.
Read more

Lawsuit against Trump denial of stimulus checks to undocumented...

The lawsuit filed against the Trump administration over the denial of coronavirus stimulus checks to undocumented parents with U.S. citizen children is being allowed to move forward under a federal judge's ruling on...
Read more

Everything We Know About ‘The Crown’ Season Four So...

Gillian Anderson and Emma Corrin are joining the cast of the Netflix drama as Margaret Thatcher and Princess Diana, respectively.
Read more

"If you believe 22 percent is herd immunity, I believe you're alone in that," Fauci told the Republican senator.
Read more

The incident occured in the city of Santee, which has an infamous history of racially motivated attacks and white supremacist activity.
Read more

Acer Extensa 15 with Intel i3 processor launched in...

The Acer Extensa 15 comes with a 15.6-inches Full-HD LED display, latest Intel Core i3 process, up to 1TB of SSD and up to 12 GB of RAM
Read more

The family of a U.K. teenager Harry Dunn have filed a civil lawsuit in Virginia against Anne Sacoolas who was driving the car which killed him.
Read more

While the rest of the tourism industry contracts, van rental companies can hardly keep up with the demand for campers.
Read more

Which threads should advance to the championship of the ultimate Wisconsin jersey tournament? You decide.
Read more

Huge fire breaks out at Beirut port month after...

Eleven state attorneys general asked the Department of Justice (DOJ) Tuesday to investigate anticompetitive practices in the meat packing industry that they say have been amplified in the midst of the coronavirus pandemic.The attorneys general, who...
Read more

President Donald Trump and Democratic presidential front-runner Joe Biden traded shots over the possibility of the Democrats holding a virtual convention this summer due to the coronavirus pandemic.
Read more

Sound science "will be the sole basis" for safe and effective therapies to be adopted, the WHO says.
Read more

We did not order religious organizations to close, but my message to everyone is that this is serious," Ohio governor Mike DeWine wrote on Twitter yesterday after one major church opened its doors.
Read more

The U.S. leads the world in coronavirus deaths and still has the most cases in the world, with over 6.7 million people sickened by the virus since January.
Read more

Brussels Airlines will restart commercial flights next month with a significantly downsized summer schedule, planning to reach 59 destinations in 33 countries in Europe, Africa and the U.S. by August
Read more

Russia’s new nuclear-powered icebreaker, the Arktika, launched on its maiden voyage out of St. Petersburg Tuesday on a two-week journey to the northern port of Murmansk.
Read more

Fresh off her selection to be Democratic presidential nominee Joe Biden's running mate, Sen. Kamala Harris (D-Calif.) is set to be the subject of a new picture book, Simon & Schuster Children's ...
Read more

Twitter is actively exploring additional ways to make money from its users, including by considering a subscription model, CEO Jack Dorsey said Thursday. The move comes as Twitter suffers a sharp decline in its core advertising business.
Read more

The memoir by the former national security adviser is a scathing indictment of the president.
Read more

Biden’s Republicans: The GOP figures playing a role in...

This year's Democratic National Convention is featuring several Republicans in an effort to show Joe Biden's appeal to both sides of the aisle.
Read more