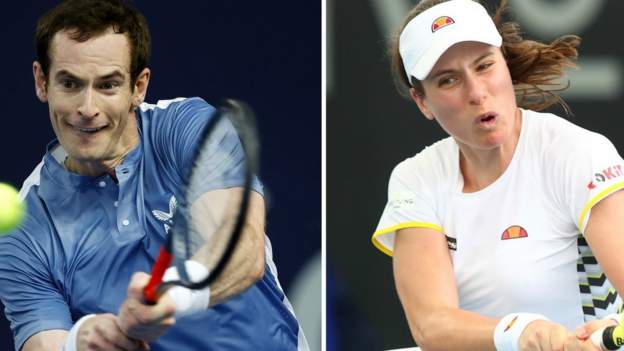 Andy Murray and Johanna Konta will both play in next week’s Battle of the Brits Team Tennis tournament in London.

Murray will be in The Union Jacks team, alongside Dan Evans, Heather Watson and his brother Jamie, who is organising the event, which begins on 27 July.

Konta will be a member of the British Bulldogs team, which also features Kyle Edmund and Harriet Dart.

It is being staged at the National Tennis Centre in Roehampton in south-west London, which has already hosted the Progress Tour Women’s Championships, won by Katie Boulter on Saturday, and Jamie Murray’s previous smaller-scale ‘Battle of the Brits’ event in June, won by Dan Evans.

Both lawmakers are locked in a contentious primary for Loeffler’s Senate seat.
Read more

Coronavirus: Kate wears a mask for first time on...

Spending in the contest between President Donald Trump and Democrat Joe Biden has barreled past the $1 billion mark as Trump invested tens of millions of dollars in advertising this summer to bolster his re-election prospects.
Read more

The Vatican responded Wednesday to criticism that the title of Pope Francis’ upcoming encyclical on the post-COVID world is sexist, saying the document, “Fratelli Tutti,” ("Brothers All") in no way excludes women
Read more

Trump tells rally: “This is not a crowd of...

The president narrowly won Michigan in 2016, and wants to win it again in November.
Read more

Travelers eager to fly again may want to consider Italy as their next destination. Rome's Fiumicino Airport has become the first airport in the world to earn "the COVID-19 5-Star Airport Rating" from Skytrax.
Read more

Democratic nominee Joe Biden blamed President Trump for the COVID-19 death toll Tuesday night, arguing that more than 200,000 people in the U.S. are dead because the president failed to take the virus seriously.Bid...
Read more

Protests could speed up the spread of coronavirus, public...

Protests and COVID-19: close proximity could increase the risk for coronavirus spread. And African Americans are especially at risk.
Read more

Rishi Sunak: We need help with rent, money and...

Under-30s have been hardest hit by the lockdown, what do they want from the chancellor's summer update?
Read more

Overall, 52 percent of Pennsylvania voters trust Joe Biden more to handle the pandemic, while 32 percent trust President Donald Trump on the issue, according to a recent poll.
Read more

Coronavirus: More than 200 test positive for the virus

The daily statistics show that 244 people tested positive for coronavirus in the last 24 hours.
Read more

Spain takes aim at nightclubs and beaches as virus...

Save the jam for the doughnut filling.
Read more

Belgium head coach Roberto Martinez extends his contract to remain in charge until after the 2022 World Cup.
Read more

Get rewarded by staying away from digital devices while...

‘I was spat at directing beach traffic in Dorset’

"Joe Biden is not a perfect man, but he is a man of humble decency," Charles Djou and Mickey Edwards wrote in an op-ed Friday.
Read more

"If MJ had a grudge with me, let's settle this like men," Grant said Tuesday. "Let's talk about it. Or we can settle it another way."
Read more

How to host a socially distant summer party

With restrictions easing across the country, many people are looking at outside gatherings like barbecues and picnics to reconnect with friends and family....
Read more

A Cardiff City member of staff is self-isolating after testing positive for Covid-19.
Read more

Ohio college students were cited after hosting a house...

Six people in Oxford, Ohio, were cited for violating a city ordinance on mass gatherings after they held a house party despite testing positive for Covid-19, according to police records.
Read more

Even in the middle of a press conference ostensibly dedicated to informing the American people about the novel coronavirus, and the national state of emergency being enacted in its wake, President Donald Trump couldn't stop himself from being, well... himself.
Read more

Couple married for 69 years beat coronavirus in their...

John and Adele Davis, who are in their 90s, have been inseparable for 68 years – until they were both diagnosed with coronavirus. The husband and wife went to separate Minnesota hospitals, but strength and love brought them back together.
Read more

This breaks the record for the earliest sixth named storm in the Atlantic basin by almost two weeks.
Read more

The Supreme Court will hear arguments by telephone conference and provide live audio for the press and the public for the first time ever.
Read more

Flyovers are also in the works for July 4 in Washington.
Read more

Guitar sales rise as UK gets into lockdown groove