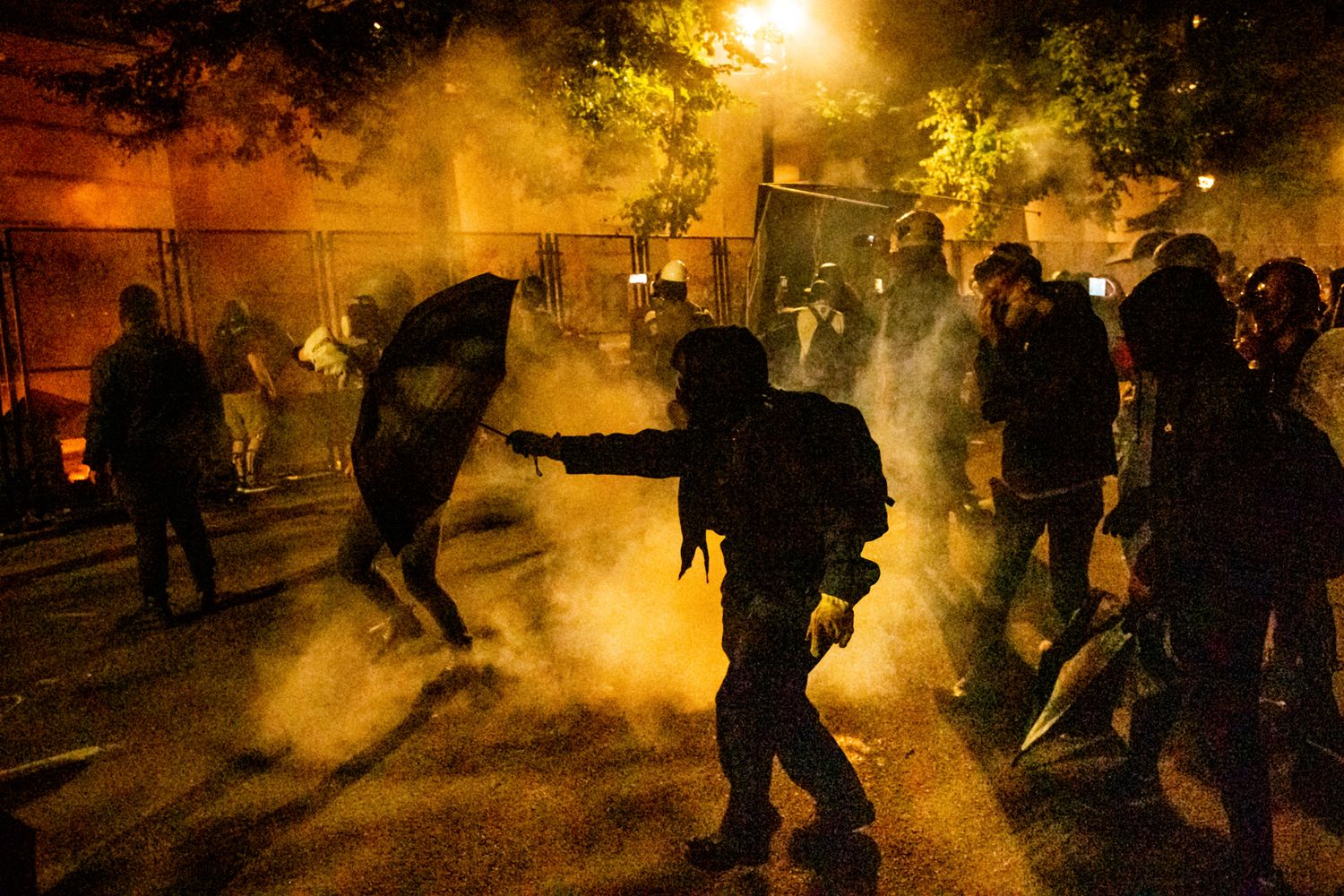 The U.S. Marshals Service, a component of the Justice Department that protects federal judges and courthouses, is currently deployed in Portland along with other federal forces as part of Operation Diligent Valor.”

On Wednesday, Democratic Sens. Ron Wyden and Jeff Merkley of Oregon, along with Reps. Earl Blumenauer and Suzanne Bonamici, requested that the DOJ and DHS OIGs investigate what they called the unrequested presence and violent actions of recently deployed federal forces in Portland.

The DOJ inspector general statement also announced that the watchdog is launching a wider evaluation of the DOJ and its law enforcement components reactions to civil unrest in both Portland and Washington, D.C. over the last two months.

The review will include examining the training and instruction that was provided to the DOJ law enforcement personnel; compliance with applicable identification requirements, rules of engagement, and legal authorities; and adherence to DOJ policies regarding the use of less-lethal munitions, chemical agents, and other uses of force, the statement read, adding the review was in response to congressional requests and requests from the public.

The DOJ inspector general’s office will also review the response to protests in Lafayette Square on June 1, along with the Department of Interior inspector generals office. Law enforcement cleared demonstrators outside the White House by firing chemical agents before President Donald Trumps photo op in front of St. Johns Episcopal Church.

‘I am woman’ singer Helen Reddy has died

Helen Reddy, singer of the 70's feminist anthem "I Am Woman," died Tuesday, according to a statement on her Facebook fan page. She was 78.
Read more

Over Half of Americans Have Taken Money Out of...

A survey found that people who withdrew money from retirement accounts used it to buy groceries and pay rent, among other expenses.
Read more

How to participate in Steve Hartman’s “Taps Across America”

Thousands of trumpet and bugle players will sound Taps from their porches on Memorial Day.
Read more

Dozens of Secret Service agents will be quarantined after...

Officials are worried people are still not coming forward for testing when they are infected.
Read more

Here's a look at the top stories making headlines on the "CBS Weekend News with Doug Dunbar."
Read more

Fans will have to wear masks at NFL games...

NFL fans attending games — assuming there's a 2020 season and spectators are allowed inside stadiums — will have to wear facial coverings.
Read more

Delta to warn over 2,500 pilots about potential furloughs

Delta Air Lines reportedly plans to warn over 2,500 of its pilots that furloughs could be coming, as the airline company struggles to regain its footing amid the coronavirus pandemic.While Delta and the labor union...
Read more

The announcement marks the first schedule change of the season due to positive test results.
Read more

The gunman has not been apprehended
Read more

But more than a dozen Republicans voted against the measure.
Read more

South Africa’s health minister Dr. Zweli Mkhize has announced that he and his wife have tested positive for COVID-19 and warned of a possible resurgence of the disease in the country
Read more

The event - usually involving hundreds of riders on horseback - is being marked in a new manner.
Read more

From the Amazon city of Manaus to the seemingly endless urban sprawl of Sao Paulo and Rio de Janeiro, freshly dug graves have been filling up quickly for weeks with the bodies of Brazilians killed by COVID-19. Deaths from the coronavirus hit some cities so h…
Read more

CDC: Isolating until COVID-19 test results come back could...

A major retailer is increasing its minimum wage

The retail giant remained open during the first wave of coronavirus and saw its online sales increase more than 275%.
Read more

The coronavirus pandemic has devastated Florida's tourism industry. Few areas of the country have felt the economic repercussions as hard as the Florida Keys. Manuel Bojorquez reports.
Read more

CDC predicting 180,000 US deaths from coronavirus by August...

An internal document by the federal government reportedly predicts the novel coronavirus death toll in the U.S. could hit 182,000 by the end of August.The number - found in an internal Cente...
Read more

Rate the players as Leicester take on Burnley in the Premier League.
Read more

Nearly nine million Americans are still without their stimulus check seven months after the CARES Act passed, according to the Government Accountability Office.
Read more

Roger Montoya, a Democratic candidate in an open New Mexico House race, has acknowledged his participation in two adult films in the 1980s as a college student.
Read more

United Airlines Passenger Allegedly Threatened to ‘Stab Everyone’ After...

Dana Ghazi Mustafa, 27, was charged with assaulting a federal officer. She allegedly admitted that a story told during the flight about her family being killed by a drunken driver had been a lie.
Read more

It's a great time to buy gear for your socially-distant adventures. Here's everything you need to go from 0 to outdoors pro.
Read more

"I'm screwed because I'm not going to be able to grow anymore because I was relying on Twitter for my growth,"
Read more

Israel’s Netanyahu, unbeaten in elections, is going on trial

Benjamin Netanyahu will once again make history after entering the record books last year as Israel’s longest-serving prime minister, when he becomes the country’s first sitting leader ever to go on trial
Read more

Your pictures on the theme of ‘insects’

Each week, we publish a gallery of readers' pictures on a set theme. This week it is "insects".
Read more