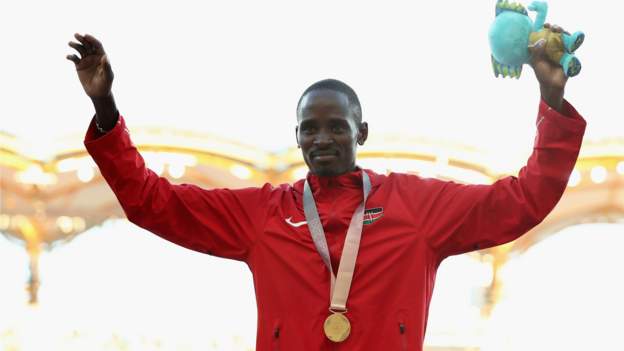 The 27-year-old Kenyan won gold at the 2017 World Championships in London, having claimed silver in Beijing two years earlier.

He was one of four Kenyan athletes who the Athletics Integrity Unit (AIU) announced on Thursday had been suspended or provisionally suspended pending a full hearing.

Manangoi responded on his Facebook saying it was ‘devastating’ news.

“News of my suspension by the AIU for 3 missed tests is really devastating for me and I’m trying to get my head round it.” he posted.

“What I can say is each of the missed tests happened during 2019, my case has nothing to do with prohibited substances and I’ve always competed as a clean athlete.

“Last year was the worst period of my career when I was upset through injury which impacted everything on and off the track.

“I know I’ve let people down in particular my coach and fellow athletes and I also know that no matter what I say here I’ll be criticised.

“The facts of the cases are clear in my mind and I’m sure there will be a time when it is appropriate to go into more detail.

“But right now I’m focussed on compiling a formal response to the AIU so wont be commenting further.”

Under anti-doping regulations, athletes have to inform testing authorities of their whereaboutsexternal-link

for a one hour window of every day.

Three failures in 12 months – not being present at the said time, or filing inaccurate or incomplete information, counts as one failure – leads to an automatic ban.

There was also a provisional suspension for Patrick Siele after he was alleged to have evaded, refused or failed to submit for a sample collection.

While Mercy Kibarus was banned for eight years after testing positive for an anabolic steroid, a second doping offence within a 10-year time frame.

Kenneth Kipkemoi was also suspended but for two years after testing positive for terbutaline.

The State Department is debating labeling Human Rights Watch, Amnesty International and Oxfam as "anti-Semitic" due to their stance on Israeli policies.
Read more

Mail carrier delivers his own celebration to the 2020...

Porygon Is the Logical Choice for the Next ‘Pokémon...

The Normal-type Pokémon is the only option that doesn't already have its Shiny form in "Pokémon Go."
Read more

Swiss chocolate-maker Milka challenged the German bar's right to be the only square bar in Germany.
Read more

Republicans eke out Democrats in turnout on first day...

More registered Republicans than Democrats turned out to vote on the first day of early voting in Florida, according to data reviewed by the ...
Read more

Pompeo says “soul of the world” at stake as...

Since 2007 the so-called "Quad" has met sporadically in the name of free markets and democracy in the Asia-Pacific region. Now they're stepping up the program.
Read more

Huawei 5G kit must be removed from UK by...

Trump tweets key GOP lawmaker has committed to not...

President Trump said Friday a key Republican senator has committed to ensuring a requirement to rename Confederate-named military bases is stripped from the annual defense policy bill, even though the fate of that require...
Read more

Hit by the virus and weighing a raid on...

Many Americans are struggling financially due to the coronavirus
Read more

Rishi Sunak: We need help with rent, money and...

Under-30s have been hardest hit by the lockdown, what do they want from the chancellor's summer update?
Read more

For about a pound of pigeon, a wealthy racing fan put down a world record 1.6 million euros ($1.9 million) for the Belgian-bred bird
Read more

China's embassy in Brazil has responded with outrage at a social media post by Brazil’s Education Minister Abraham Weintraub, calling it “defamatory,” “stigmatizing,” “completely absurd and despicable,” and “having a strongly racist manner.”
Read more

Sen. Bernie Sanders (I-Vt.) announced endorsements for over 150 Democrats running in local races across the country.Sanders said the 172 contenders he endorsed Friday would be strong advocates for the progressive m...
Read more

Debut of Chinese e-finance giant derailed by fear of...

The world’s biggest online finance company was racing toward a stock market debut when it was derailed by official anxiety about risks in the fledgling industry, jarring global investors and adding to uncertainty about China’s financial markets
Read more

Fierce storm surge feared as Laura bears down on...

Tropical Storm Laura has entered the warm waters of the Gulf of Mexico, gathering strength on a path to hit the U.S. coastline early Thursday as a major hurricane, capable of “devastating” damage
Read more

A Florida police officer teamed up with a good Samaritan to resuscitate a man after he apparently overdosed and fell unconscious on a sidewalk, authorities said.
Read more

A person who visited a bar during the Sturgis Motorcycle Rally has tested positive for the coronavirus, health officials in South Dakota said.
Read more

Melania Trump sculpture in Slovenia set on fire on...

Police investigate after the statue of the US first lady was targeted in her hometown on 4 July.
Read more

Congress working on another coronavirus relief package as unemployment...

Administration officials were alerted Wednesday that a cafeteria employee on White House grounds tested positive for the coronavirus, according to multiple reports.
Read more

Foie gras legal to serve in California restaurants after...

Foie gras could make a comeback in California restaurants after a judge ruled the delicacy, which was banned over concerns about animal cruelty, can be brought in from out of state. CBS Los Angeles reports.
Read more

Video Shows Huge Line of Travelers Lined Up at...

Yes, You Should Be Using Apple Pay or Google...

Hear us out: Paying with a smartphone is actually more secure and more efficient than using a credit card.
Read more

State Farm Arena and the Atlanta Falcons' Mercedes-Benz Stadium will open to voters next month ahead of January's Senate election.
Read more

As organised displays are cancelled due to the Covid pandemic, more people are expected to light fireworks at home.
Read more

Mexican president withholding congratulations until US election challenges are...

Mexico's President Andres Manuel Lopez Obrador said on Saturday he would not congratulate a winner of the U.S. presidential election until all legal challenges have been concluded."With regard to...
Read more

Trump says the US is negotiating a nuclear nonproliferation...

In a White House press briefing Friday, President Trump said that the U.S is in talks with Russia renegotiating a nuclear nonproliferation treaty, adding that China may be brought into those talks at some point later.
Read more

In Bolsonaro’s Brazil, everyone else is to blame for...

Samsung's Galaxy S10e is down to an all-time low price for one...