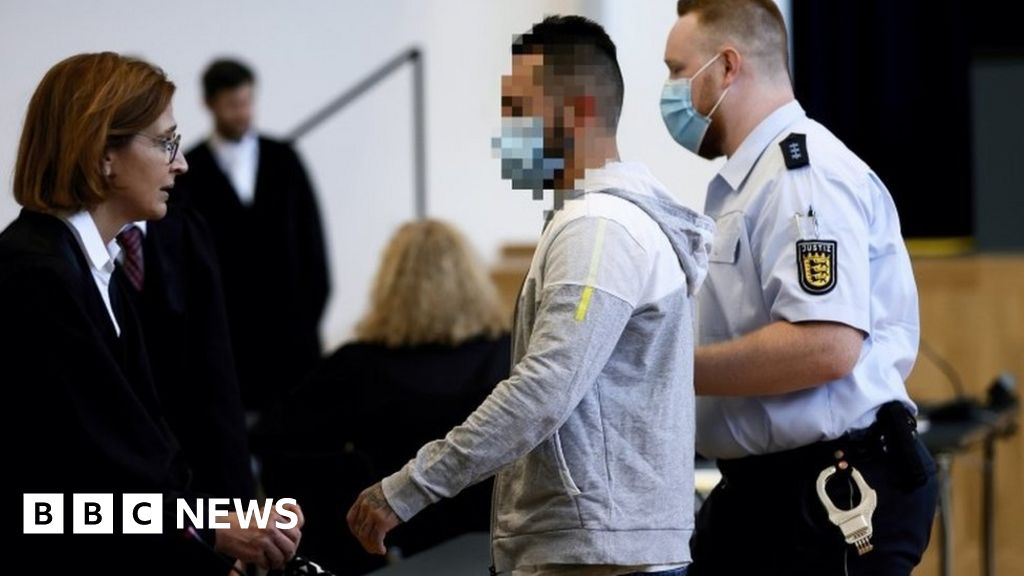 The lead defendant arrives in court

Ten men, mostly Syrian refugees, have been found guilty over the gang rape of a woman outside a German nightclub.

The 2018 attack in the city of Freiburg fuelled anti-foreigner sentiment, with protests by the far right.

The lead defendant was sentenced to five and a half years for the attack – which lasted for more than two hours – while seven others received sentences of up to four years.

One man was acquitted.

The victim, who was 18 at the time, had her drink spiked before being attacked in bushes outside the venue.

Eight of the men on trial were refugees from Syria, while the other three came from Iraq, Afghanistan and Germany.

After the attack – which came following other high-profile attacks committed by immigrants – the anti-Islam Alternative for Germany took to the streets to protest against Chancellor Angela Merkel’s liberal policy towards migrants.

Ms Merkel received both widespread praise and criticism for her “open door” policy. She has since admitted that Germany was ill-prepared for the influx.

The consequences of rape, maltreatment, disease and racism are revealed by the findings.
Read more

Just when we need it most, Disney kicks off the holidays with a special treat! The fifth anniversary edition of “The Wonderful World of Disney: Magical Holiday Celebration,” airs Thanksgiving night at 9/8c on ABC!
Read more

The House easily passed a temporary government-wide funding bill Tuesday evening in a bipartisan effort to keep the government funded through the beginning of December.
Read more

Kirsty Maxwell family ‘in the dark’ over end of...

The Livingston woman's family have not been told about Spanish courts allegedly ruling there is no evidence of criminality.
Read more

In its latest episode, which took place on Halloween, "Saturday Night Live" had Jim Carrey's Joe Biden read a scary story about something that is spooking a lot of Americans: next week's election.
Read more

Leicester boss Brendan Rodgers says securing European football was a target for the Foxes at the start of the season on a night when victory against Sheffield United maintained their top four challenge.
Read more

As of noon Wednesday, 13 states across the U.S. have reported over 80 confirmed, non repatriated cases of the novel coronavirus. Of those cases, 24 were travel-related, 16 were person-to-person spread and 40 are still under investigation. Here are the infecte…
Read more

US pilot jailed in Singapore for breaking quarantine order

The science behind ‘the breath of a wok,’ an...

For those who grew up in a Cantonese family, it's almost impossible to go to a Chinese restaurant without hearing someone comment on the quality of the "wok hei," or "breath of the wok." We ask the experts to explain why it's so essential to Cantonese dishes …
Read more

This Invitation to Work Remotely in Hawaii Is Pretty...

As the continental U.S. begins seeing colder temperatures and fewer opportunities to get outdoors safely, this might be the warm weather escape you've been looking for. A new program invites Americans to work remotely from Hawaii.
Read more

President Trump's plans for a splashy renomination could run afoul of the Florida governor's executive order to prevent the spread of Covid-19.
Read more

D.C.-area forecast: Heat and humidity to set off more...

The storms should not be as dramatic as Wednesday's but humidity remains oppressive.
Read more

‘Keeping Up With the Kardashians’ Canceled: Why the Show...

"Keeping Up With the Kardashians" is coming to an end after 13 years and nearly 20 seasons, as revealed by Kim Kardashian West in a statement.
Read more

Foot Locker is booming as people spend their stimulus...

Consumers have more money in their pockets thanks to government stimulus checks — and apparently many are using it at malls and online to buy new sneakers, which is good news for Foot Locker.
Read more

An inquiry finds police acted "proportionally" in dealing with the man who coughed and spat on staff.
Read more

House Set To Vote On Impeachment

The House of Representatives will debate and vote on two articles of impeachment against President Donald Trump Wednesday after weeks of testimony related to his dealings with Ukraine and hours of fiery debate over the process.
Read more

U.S. Chamber of Commerce Vice President Ashlee Rich Stephenson joined CBSN to discuss how the group selected which candidates to endorse in the 2020 election as well as the group's partnership with the AFL-CIO, the largest federation of unions in the U.S.
Read more

The drug will be given to patients in hospitals, but the UN health agency says it has little effect.
Read more

Carl Reiner, the ingenious and versatile comedy writer, actor and director, has died, according to reports
Read more

Airbnb hosts wrestle with how far to go to...

Sen. Tim Scott's keynote speech on the first night of the Republican National Convention touched on the "promise of the American journey."
Read more

Former Vice President Joe Biden has widened his lead over President Trump in Florida, according to a new poll released on Thursday, the latest sign that the president is facing an increasingly difficult battle in his adop...
Read more

"It is true that we disagree on policies and visions for America, but that does not mean we should be disrespectful,” Rep. Ted Yoho said.
Read more

The award-winning actress called rapper and presidential hopeful West out on Twitter Thursday morning for using her image in a bizarre campaign promo.
Read more