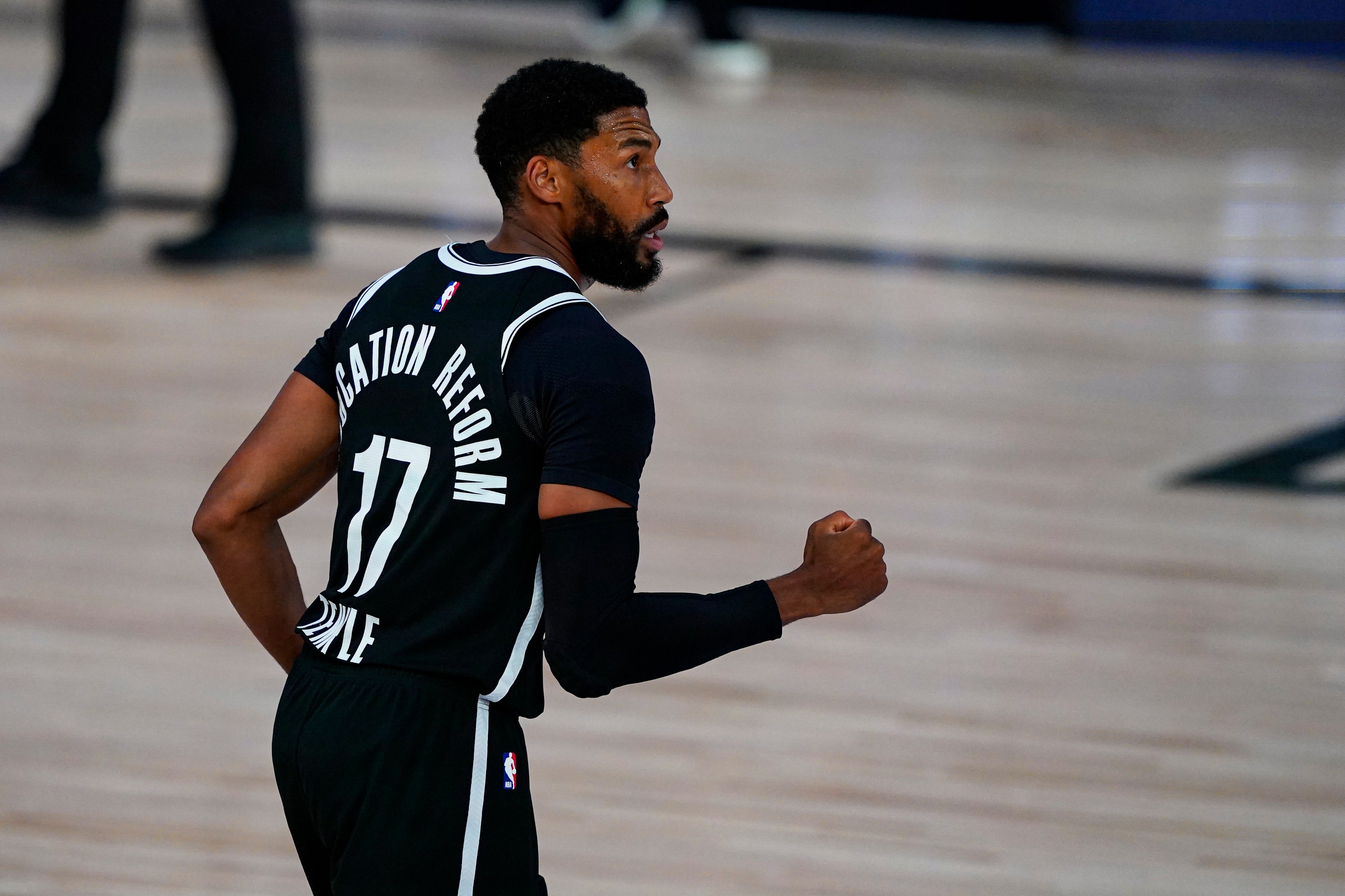 Timothé Luwawu-Cabarrot hit back-to-back 3-pointers to put Brooklyn ahead to stay, and the Nets beat Milwaukee 119-116 on Tuesday to keep the Bucks from clinching the top seed in the Eastern Conference.

Luwawu-Cabarrot finished with a career-high 26 points. Garrett Temple scored 19, Tyler Johnson and Justin Anderson each had 11 and Rodions Kurucs and Chris Chiozza had 10 apiece.

“We didn’t have our best four out there, so obviously it’s an opportunity for everybody coming up and next man up mentality,” Luwawu-Cabarrot said.

Milwaukee coach Mike Budenholzer wanted to get some of his Bucks rest at this point in the schedule.

“Thursday or whenever it is we play Miami we’ll be back to something more what I guess you’d consider normal and continue to build toward the start of the playoffs,” Budenholzer said.

The Bucks sounded eager to forget this loss.

“We’ve got to move on,” said guard Eric Bledsoe, who made his bubble debut. “Things like this happen. It happened last year. No one’s perfect. We’ve got a great team, but no one’s perfect.”

The Nets have a patchwork lineup but are fighting Orlando for seventh place in the East and putting more distance between ninth-place Washington as they try to avoid a play-in for the final postseason spot.

Chiozza scored on a reverse layup, then Luwawu-Cabarrot hit a 3 with 2:59 left to put the Nets ahead to stay. He added a second with 2:31 to go. Korver hit a long jumper with 1:48 left, but it was ruled two points and not a 3 that would have tied it at 115.

Luwawu-Cabarrot played 31 minutes and was 8 of 12, including 5 of 7 from 3-point range. Nets coach Jacque Vaughn said they’ve been trying to find the right role for the guard.

“Hopefully, we found a sweet spot for him,” Vaughn said. “Seems like he’s in a good rhythm. We’ll continue to put him in positions where he can take advantage of his speed and shooting ability.”

Milwaukee appeared ready to clinch from the opening tip as the Bucks scored eight of the first 10 points and hit 7 of 14 beyond the arc. The Nets led 40-34 at the end of the first quarter and 73-65 at halftime.

Facebook reaches out to college students amid pandemic with...

Facebook is recasting part of its platform for college students, creating a separate space with additional features for students to connect and interact with each other away.The move is aimed at helping bolster col...
Read more

Severe weather threat for over 90 million in Northeast...

Another round of severe thunderstorms is possible across the Northeast and New England on Thursday, a day after wild lightning in the New York City area set a church on fire.
Read more

The video sees Biden comfort the son of Chris Hixon, the coach who died trying to save his students.
Read more

The move allows English and history pupils to focus on reduced content after disruption to lessons.
Read more

Police arrested dozens of protesters as thousands of officers were deployed to the streets of Hong Kong on China’s National Day. Chief Executive Carrie Lam led official celebrations and said stability has been restored in the city. Photo: GIS Handout and Yam …
Read more

A 36-year-old officer was taken to hospital with serious injuries after an incident in the Hillhead area of Glasgow.
Read more

Two Supreme Court rulings will keep President Donald Trump’s tax returns, banking records and other financial documents out of the public eye for the time being
Read more

Federal Reserve Board Governor Lael Brainard warned Wednesday that the U.S. economy could slip back into recession if the White House and Congress cannot strike a deal on fiscal stimulus. In a We...
Read more

A Fox News poll released Sunday found half of Americans say President Trump should be impeached and removed from office.Fifty percent of respondents supported the president's impeachment and remo...
Read more

The Village People’s YMCA is preserved for posterity

As the new school year approaches, parents, educators and state officials are weighing whether it is safe to send children back to classrooms amid the coronavirus pandemic.
Read more

Jason Servis, the trainer of Saudi Cup winner Maximum Security, is among 27 people charged in the USA over the alleged doping of horses.
Read more

Wells Fargo put people in a program that puts a hold on their mortgages to protect them during the coronavirus pandemic — even though customers in 14 states didn’t need the help. Now their mortgage payments aren’t being credited.
Read more

Philadelphia protesters sue city over tear gas and use...

One lawsuit accuses Philadelphia police of lobbing tear gas and firing rubber bullets at protesters indiscriminately as they marched peacefully on a city highway.
Read more

The coronavirus shutdown, the MLS is Back tournament in a bubble and team injuries have contributed to a hard season for Minnesota United coach Adrian Heath.
Read more

Here are the Confederate statues in the Capitol

The hearing was an opportunity for officials to polish their image as altruistic innovators amid a global pandemic.
Read more

Vice President Pence and Sen. Kamala Harris (D-Calif.) dodged and weaved their way through a largely cordial debate on Wednesday night in Utah that was low on fireworks and heavy on policy.Debate moderator Susan Pa...
Read more

The economy is in shambles but Big Tech stocks...

Scotland’s papers: Baby found next to dead mum and...

The story of how a "starving baby" was found beside his dead mother and limits on care home visits make the front pages.
Read more

At first, David Caldwell didn't believe that the woman taking care of his son also took care of him.
Read more

Lawrence Jones: Biden is relying on Obama and his...

The announcements come a day after President Donald Trump threw his support behind facial coverings to help stop the spread of coronavirus.
Read more

Russia's lead envoy in crucial nuclear talks has told NBC News that the Kremlin does not currently believe the U.S. will extend an arms reduction treaty.
Read more

Just days after a group of researchers found that Greenland's ice sheet is past a "point of no return," a separate group of experts said that Earth has lost 28 trillion tons of ice between 1994 and 2017.
Read more

Trump's Covid-19 testing czar says the government is doing all it can...