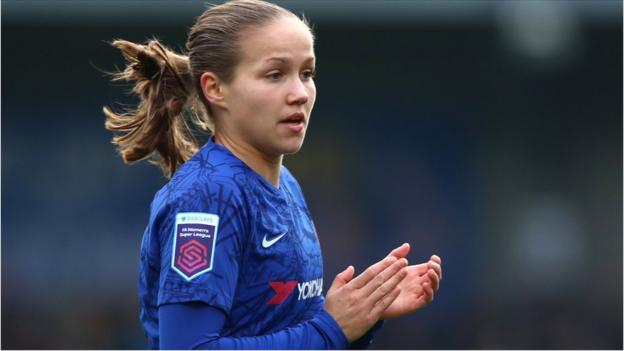 Guro Reiten signed for Chelsea from LSK Kvinner in May 2019

Chelsea Women’s attacking midfielder Guro Reiten has signed an extended contract with the club until 2023.

The 26-year-old Norway international scored seven times in 23 appearances in her first season with the Blues, after arriving last summer.

“My first season was amazing and I don’t think there is a better place to be right now than this club,” she told Chelsea’s website.

“I’m very happy here and the club have showed that they want me here.”

Chelsea won the Women’s Super League last term, as well as the Continental League Cup, and will begin the defence of their title on the weekend of 5-6 September.

General manager Paul Green added: “We wanted to reward Guro for an excellent debut season and we’re delighted that she has extended her contract.

“Guro brought great value to the team upon her arrival and quickly became a very important player in the team’s success last season.”

Samsung may have just made the Galaxy Tab S7+ (along with a slew of other devices) official yesterday, we've spent the last three days with it. The brand-new $849.99, 12.4-inch the higher-end device of the new Galaxy Tab flagship pair (compared to its smaller…
Read more

Two of the show's stars, Norman Reedus and Melissa McBride, will get an unnamed spin-off series.
Read more

Kendall Jenner Has No Time For People Telling Her...

She had some choice words for some nasty followers.
Read more

The British government says there could be lines of 7,000 trucks at the English Channel and two-day waits to get into France immediately after the U.K. makes its economic break from the European Union at the end of the year
Read more

WHO official says agency not invited to take part...

China has not invited the WHO to take part in an investigation into the origins of the coronavirus outbreak, according to an official with the organization.
Read more

The most memorable moments from Chiefs vs. Texans on...

It's been over seven months since Super Bowl LIV, and the defending champion Kansas City Chiefs picked up right where they left off with a 34-20 win over the Houston Texans.
Read more

The ACLU of Oregon is suing the U.S. Department of Homeland Security and Portland police for using force against medics during protests.
Read more

Should schools reopen this fall despite spike in COVID-19?

President Trump is urging all schools to reopen in the fall, but some parents, teachers and local officials are concerned as coronavirus hospitalizations spike. Dr. Dyan Hes, a pediatrician in New York City, joined CBSN to discuss how to get students back in…
Read more

A tropical storm developing in the Pacific Ocean is slowly sweeping toward Japan, threatening the main island of Honshu with heavy rainfall and harsh winds
Read more

Pelosi says election threats from Russia and China are...

“Russia is actively 24/7 interfering in our election. They did so in 2016, and they are doing so now,” Pelosi added.
Read more

An apology is the beginning’: Pa. health secretary decries...

“While these individuals may think they are only expressing their displeasure with me, they are in fact hurting the thousands of LGBTQ Pennsylvanians."
Read more

China orders U.S. to shut down Chengdu consulate in...

China is ordering the U.S. to shut down its consulate in the southwestern city of Chengdu as tensions escalate between the two countries. In a Thursday speech, Secretary of State Mike Pompeo accused China of using its Houston, Texas consulate to spy and steal…
Read more

For a third time in four games this season, Detroit loses after leading by double digits
Read more

Officials say breached levees have trapped more than 10,000 people in an eastern Chinese town as flooding worsens across much of the country
Read more

Two men are investigated after 13 ancient amphoras are discovered during a routine inspection.
Read more

The Latest: Soccer union says players are getting food...

Murphy urges attendees at Trump fundraiser in Bedminster to...

Some Xbox owners report having to install an 85GB file - more than twice the size it should be.
Read more

A fifth person had been arrested Thursday in connection with Jackson's death. It is unclear if that person will also be facing charges.
Read more