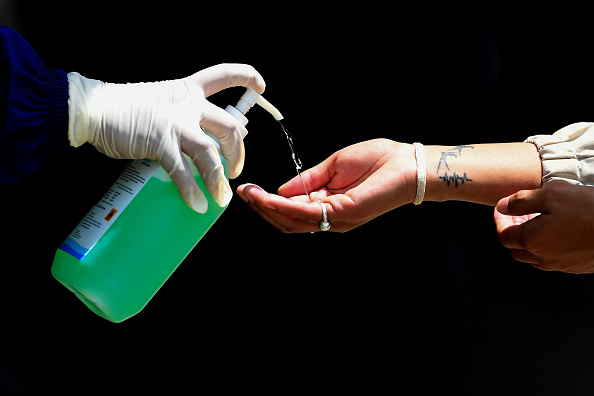 After nearly two months of hand sanitizers made in Mexico getting recalled by the U.S. Food and Drug Administration (FDA), hand sanitizers from four U.S. states and another country were added to the “do-not-use” list.

Texas is the largest state on the list, followed by North Carolina, Georgia and Utah. China is the other country added, according to the FDA.

The newest products have been identified to either contain 1-propanol or methanol, which are prohibited in hand sanitizers. Both are considered “toxic,” and methanol has already been found in more than 150 hand sanitizersall of which are made in Mexico.

Get your unlimited Newsweek trial >

Hand sanitizers became a hot commodity as the spreading of COVID-19 during the global pandemic led to fears, shutdowns and more awareness of cleanliness.

The FDA on Wednesday announced that 1-propanol, which can be found in hand sanitizers, can depress the central nervous system. The FDA stated some products are labeled to contain ethanol or isopropyl alcohol, but have tested positive for 1-propanol contamination.

Get your unlimited Newsweek trial >

Here is a list of hand sanitizers recalled by the FDA so far because of “toxins” found in them, whether they be 1-propanol or methanol.

And here are the states (and China) that produce hand sanitizers with ingredients the FDA deems Toxic”:

The FDA stated it will continually look into products to ensure safety for those who purchase and use them.

“FDA remains vigilant and will continue to take action when quality issues arise with hand sanitizers,” it said. “Additionally, the agency is concerned with false and misleading claims for hand sanitizers, for example that they can provide prolonged protection such as 24-hours against viruses including COVID-19, since there is no evidence to support these claims.”

Though hand sanitizer is commonly recommended to help keep your hands clean while in publicor even inside your homeso many of them have been discovered to have methanol, which can be toxic if either ingested or infiltrated wrongly through skin. The introduction of 1-propanol is another way the FDA is warning consumers of the dangers of products on the market.

The award-winning actress called rapper and presidential hopeful West out on Twitter Thursday morning for using her image in a bizarre campaign promo.
Read more

Minnesota governor signs ban on chokeholds as part of...

Minnesota Gov. Tim Walz (D) on Thursday signed into law police reform legislation that bans the use of chokeholds and establishes new reporting requirements for police departments, among other provisions.Walz signe...
Read more

Head of China CDC gets injected with experimental vaccine

Why exactly is the US so interested in Greenland?

Was it really less than a year ago that we learned Trump wanted to buy Greenland?
Read more

The Asus ROG 3 is a top-tier gaming phone and the first phone to sport the Snapdragon 865 Plus chipset, making it plenty unique in 2020.
Read more

Paradise lost: How Hawaii went from Covid-19 star to...

What Walmart, Target, Kroger and Other Grocery Stores Are...

Stores like Kroger and Walmart will be installing sneeze guards at their checkout counters.
Read more

With boost from Donaldson, Twins boldly aim for World...

Senate Majority Leader Mitch McConnell (R-Ky.) said on Tuesday that a forthcoming Republican coronavirus proposal will include more than $100 billion for schools.Republicans view help for schools - which are weighi...
Read more

Japan plunged into recession in the first quarter as the coronavirus pandemic slammed production, exports and spending and economists warned worse times lie ahead
Read more

Wildfire smoke can trigger a wide arrange of symptoms in humans, many of which are eerily similar to ones most commonly associated with COVID-19.
Read more

Cadets at the U.S. Coast Guard Academy are being credited with saving a mission that had been endangered by the coronavirus pandemic this summer
Read more

Tropical Cyclone Amphan made landfall close to the India-Bangladesh border with sustained winds of 160 kilometers per hour (100 mph), according to the US Joint Typhoon Warning Center.
Read more

Health experts have long warned about a second peak in Covid-19, and now a rise in cases has pushed Arizona to tell its hospitals to activate emergency plans.
Read more

175 members of Congress call on postmaster general to...

Dozens of House Democrats on Wednesday signed onto a letter calling for Postmaster General Louis DeJoy to reverse his overhaul to the U.S. Postal Service (USPS), citing the coronavirus pandemic and upcoming ele...
Read more

WSL highlights: ‘You have to sit back & admire’...

Watch highlights as Jill Roord scores a hat-trick as Arsenal made a strong start to the new Women's Super League season with a thumping 6-1 win over Reading.
Read more

Nevada approves plan to mail ballots to all registered...

The state of Nevada has approved a plan to send absentee ballots to all active voters this November, a major expansion of mail-in voting in the battleground state.
Read more

Woman is first in U.S. to get second face...

Carmen Blandin Tarleton, whose face was disfigured in an attack by her ex-husband, became the first American and only the second person globally to undergo a second face transplant.
Read more

Despite the commentariat’s assumption that he was an idiot, the president’s son-in-law has successfully nudged the tectonic plates of Middle East politics.
Read more

Many New Yorkers who suspected they had COVID-19 did...

Many New Yorkers who suspected they had COVID-19 did not, study findsgo.com
Read more

POLITICO Playbook: Are the W.H. and Senate Rs on...

And Joe Biden’s campaign goes up with a new ad in battleground states.
Read more

Ohio says voters won't be turned away from polling places if they...