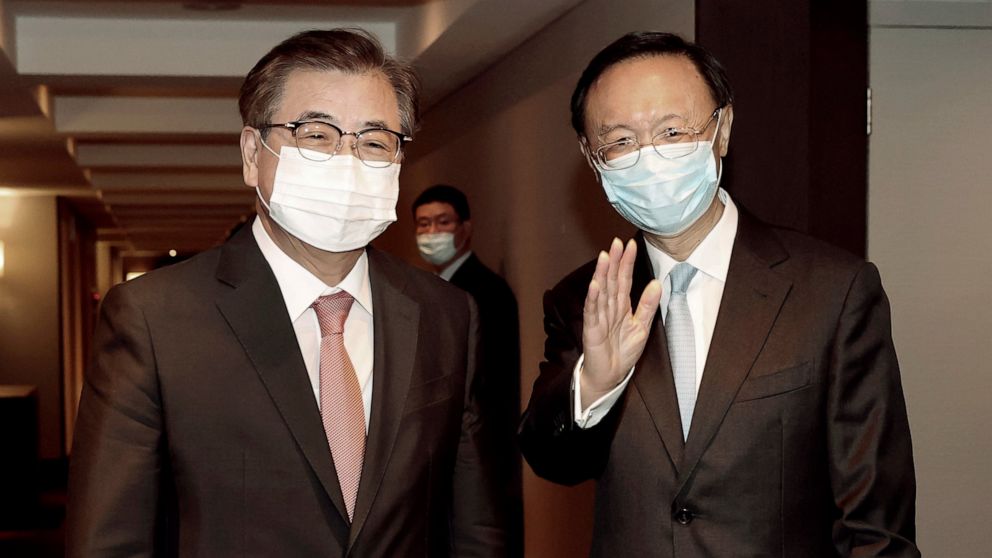 Senior South Korean and Chinese officials on Saturday reaffirmed plans to arrange a summit between their leaders at an early date once coronavirus concerns subside, Seouls presidential office said.

The government of South Korean President Moon Jae-in has been eager to improve bilateral relations that have been strained since South Korea deployed a U.S. anti-missile system on its soil in 2017 over Chinese objections. Moon had hoped to host Chinese President Xi Jinping in Seoul during the earlier half of the year, but the spread of COVID-19 prevented the visit.

Yang, a politburo member of the Chinese Communist Partys powerful Central Committee, promised constant communication and cooperation with South Korea while supporting efforts to denuclearize the Korean Peninsula and stabilize peace, according to the Blue House, which didnt provide further details.

Moons government is eager to resume engagement with North Korea, which has virtually cut off all inter-Korean cooperation amid nuclear negotiations with the Trump administration that have stalled over disagreements in exchanging sanctions relief for nuclear disarmament. China, North Korea’s major ally and economic lifeline, had endorsed the easing of U.S.-led sanctions and pressure to induce denuclearization steps from the North.

During the Busan meeting, Yang also briefed Suh on Chinas position regarding its intensifying row with the Trump administration that has expanded from trade issues and now includes Hong Kong, Chinese Muslims, spying accusations and control of the South China Sea. Suh said co-prosperity and friendly cooperation between Washington and Beijing are critical for the interests of Northeast Asia and the world, the Blue House said.

Rising U.S.-Chinese tensions have rattled South Korea, which worries about being squeezed between its main military ally and biggest trading partner.

“The Price is Right” is returning with no live audience

How the debate on the climate crisis ricocheted from...

Two universes collided in the Presidential debate, with Donald Trump and Joe Biden outlining very different ideas of what should be done about the climate crisis, writes Bill Weir.
Read more

The British government says there could be lines of 7,000 trucks at the English Channel and two-day waits to get into France immediately after the U.K. makes its economic break from the European Union at the end of the year
Read more

The vote comes after the school district received national attention over the policy.
Read more

The NEOWISE comet was captured again on Monday, with this breathtaking image showing the celestial object flying over Manstone Rock in Shropshire, England.
Read more

Three weeks before Election Day, President Donald Trump’s campaign has been left reeling by a series of setbacks
Read more

Sen. Chuck Grassley (R-Iowa) has dropped his hold on two of President Trump's nominees, which he placed earlier this month in a bid to get more information on the firing of two inspectors general.Grassley, in a ...
Read more

Think you know the Minnesota Vikings? Here's your chance to find out with a crossword puzzle where every answer has to do with the team.
Read more

"The GOP thought they could score a political victory by forcing people to choose between staying safe and risking their lives to vote," Wisconsin's Democratic chairman said.
Read more

Odion Ighalo says his ‘happiness will never change’ at...

The NHL's return-to-play format could be complicated further should the U.S. and Canada extend border restrictions into July.
Read more

China's embassy in Brazil has responded with outrage at a social media post by Brazil’s Education Minister Abraham Weintraub, calling it “defamatory,” “stigmatizing,” “completely absurd and despicable,” and “having a strongly racist manner.”
Read more

Hawaii’s largest daily newspaper laying off nearly half its...

The largest daily newspaper in Hawaii is making deep cuts to its newsroom staff, eliminating many positions and reducing the staff's size by almost half....
Read more

In reversal, Trump administration will extend support to Texas...

State and local officials urged the administration to maintain support for the sites.
Read more

The EGOT-winner told James Corden that at first, she thought no one wanted a third installment but much to her surprise, fans are clamoring for it.
Read more

Stock markets on Thursday opened down after an uptick in jobless claims surprised economists.The Dow Jones Industrial Average dipped 80 points, or 0.3 percent, and the S&P 500 was down 2.9 points, or 0.1 percen...
Read more

Tokyo officials vow Olympics ‘at any cost,’ even if...

Olympic athletes breathed a sigh of relief after Japanese sports officials pledged, in their strongest words yet, that postponed games will take place in 2021.
Read more

Number of Coronavirus Cases in New York Grows to...

"We want to keep testing and finding more people who are testing positive because that's how you contain the outbreak," Governor Cuomo said. "Find the person who got infected, quarantine them and reduce the infection rate."
Read more

Coronavirus: Thousands protest in Israel over handling of economy

Thousands have rallied against what they say is hardship caused by the mishandling of the crisis.
Read more

Nigeria’s anti-police protesters have stayed on the streets in Lagos, breaking the government curfew following a night of chaotic violence in which demonstrators were fired upon, sparking global outrage
Read more

Opinion: The Perils of Mail-in Ballots

Louisiana couple gets married in airport right before their...

The pro wrestling world lost one of its best. Shad Gaspard, 39, died after being caught in a riptide in California and telling lifeguards to save his son.
Read more

Strong, Gargano and Reed clash in a Triple Threat...

The San Francisco Board of Supervisors voted unanimously on Tuesday to allow targets of racist 911 calls to sue their accusers. The Caution Against Racial and Exploitative Non-Emergencies Act, al...
Read more

Ken Osmond, Eddie Haskell on “Leave It to Beaver,”...

Actor became so typecast as Haskell it led to a second career, as a police officer.
Read more

‘The Voice’ Coaches Nailed ‘Let My Love Open The...

"Let My Love Open the Door" was originally written and performed by Pete Townshend. It was the feature single from his 1980 album "Empty Glass."
Read more

Trump surprises Ford officials by not wearing mask for...

Ford sources contradicted the president's stance on mask-wearing during a trip to the Michigan plant.
Read more

Russia and China are blocking the official release of a report by U.N. experts on Libya that accuses its warring parties and their international backers -- including Russia -- of violating a U.N. arms embargo on the conflict-wracked country
Read more

Polls open in Malaysian state in key test for...

Three community organizations are teaming up to host a Ramadan Lights challenge in Dearborn, Michigan, calling attention to the local house-decorating practices that make the city and area’s Muslim community so visible during the holy season
Read more

Nokia is the second manufacturing company after Oppo in recent weeks to open up its plant and quickly shut down due to workers testing positive for Covid-19.
Read more

The 43-year-old man is believed to be responsible for half of the locally acquired coronavirus cases recorded in Ho Chi Minh City up until September 15.
Read more

These men received 505-year prison sentences each. Now their cases are under...