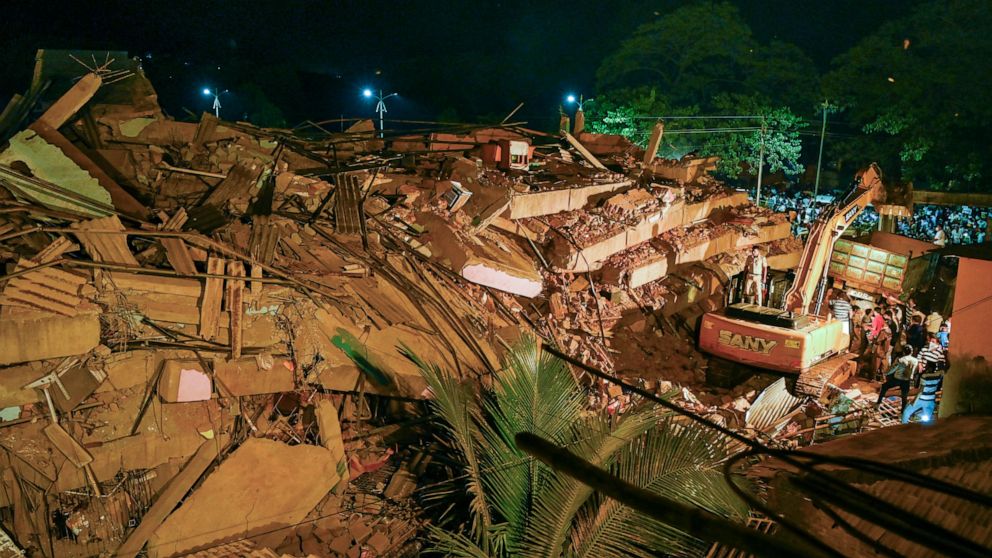 Rescuers found one dead body and pulled out nearly 60 survivors from a collapsed residential building in central India, an official said Tuesday.

Workers were still looking for more than 20 people feared trapped in the rubble of the five-story building that collapsed Monday evening, senior official Nidhi Chaudhari said. It occurred in Mahad, about 170 kilometers (105 miles) from Indias financial capital of Mumbai in the central state of Maharashtra.

Dozens of rescuers from the National Disaster Relief Force worked overnight with tools to pry apart the debris, Chaudhari said. Some of the grievously injured extracted from the wreckage were hospitalized, she said.

The building had more than 40 apartments and authorities are yet to ascertain the cause of the collapse. Chaudhari said an investigation was ordered.

A video shared on social media late Monday showed a group of men on top of the collapsed building removing debris by hand while dozens of onlookers watched.

Indias Home Minister Amit Shah tweeted that the collapse was tragic and that he was praying for everyones safety.

Building collapses are common in India during the June-September monsoon season, when heavy rains weaken the foundations of structures that are poorly constructed.

An F-22 fighter pilot ejected before his jet crashed Friday during a routine training mission in Florida, according to the Air Force.The aircraft -- which was based at Eglin Air Force Base in the state's panhandle...
Read more

Stuart Broad's six wickets leave England on the verge of a series victory over West Indies on the third day of the deciding Test at Emirates Old Trafford.
Read more

Jussie Smollett – who has been fighting the city of Chicago’s $130,000 lawsuit over the costs of an investigation into what officials alleged was a hoax attack on himself – is now turning the tides on the city’s police force.
Read more

Tiny Montana school to be among first in US...

A tiny public school in Montana will be among the first in the U.S. to resume classroom teaching this week after being closed for nearly two months due to the coronavirus pandemic
Read more

A tropical storm with wind speeds up to 50 mph made landfall in South Carolina on Wednesday, causing heavy rainfall across the state.The National Hurricane Center (NHC) reported that Tropical Storm Bertha made land...
Read more

More Minneapolis voters say police force should not be...

More Minneapolis voters said in a poll released Saturday that the city's police force should not be reduced.The ...
Read more

Cardinals, Reds, Brewers are all charging hard in NL...

The St. Louis Cardinals are in second place in the division, a game ahead of the Cincinnati Reds and Milwaukee Brewers.
Read more

Lebanese hold raucous rally outside US Embassy in Beirut

Dozens of Lebanese protesters have held a raucous, pro-Hezbollah rally outside the fortified U.S. Embassy in Beirut denouncing what they said was Washington’s interference in Lebanon's affairs
Read more

In Vermont, an immigrant city races to tamp down...

After months of having some of the fewest coronavirus cases in the country, Vermont is now trying to contain an outbreak that has hit an immigrant community in a small but densely populated city
Read more

The Texas State Fair has been canceled, the first time since World War II that the annual Dallas event won't be held."This was an extremely ...
Read more

Pandemic unemployment assistance that offers $600 a week to people who lost their job due to the virus is set to expire this week. For many, it means the end of an economic lifeline.
Read more

Satellite megaconstellations could have ‘extreme’ impact on astronomy, report...

Huge constellations of satellites, including SpaceX's Starlink network, could change how astronomers study the night sky and how the rest of us experience it.
Read more

Since the arrival of COVID-19, my patients' anxiety has never been higher. And, like fire needs oxygen, many sleep problems—like insomnia—thrive on anxiety.
Read more

House Democrats on Monday unveiled a scaled-back $2.2 trillion coronavirus relief package, a last-ditch effort to pressure White House negotiators to come back to the table and strike a bipartisan deal before the election...
Read more

Dozens killed in violent crackdown on Nigeria protests against...

Nearly 70 peaceful protesters in Nigeria have been killed by security forces. Support for the movement against police brutality is spreading online and around the world.
Read more

In Defense of Liz Cheney

Cheney has deeply held views on foreign policy, and doesn’t hide them, even when they depart from those of the president.
Read more

10 things to know about the NBA’s restart

The deals are done. The NBA is coming back. The season will resume July 30 at Disney's ESPN Wide World of Sports complex in Florida.
Read more

Coronavirus: How the travel downturn is sending jet planes...

Amid the pandemic, commercial air fleets are grounded in some of the world's most remote locations.
Read more

Authorities inspecting a seafood store in Spain have discovered a collection of ancient Roman containers, called amphorae, some of which could have been created in the first century and recovered from shipwrecks off the Mediterranean coast.
Read more

‘We’ve Worked On Ourselves’: Jenna And Zach Reveal How...

Jenna and Zach fought while she was competing on 'Total Madness' -- so where does the 'Challenge' couple stand today?
Read more

From John Butcher to Kevin Tapani, FOX Sports North looks at the one-season wonders for the Minnesota Twins on the rubber.
Read more

Plans for the tech giant to buy the China-owned app's US arm were put in doubt by Donald Trump.
Read more

The president's firing of the state department's inspector general will be investigated by Congress.
Read more

As the number of people worldwide infected with the new coronavirus approaches 100,000, there is a sense of déjà vu across the West
Read more