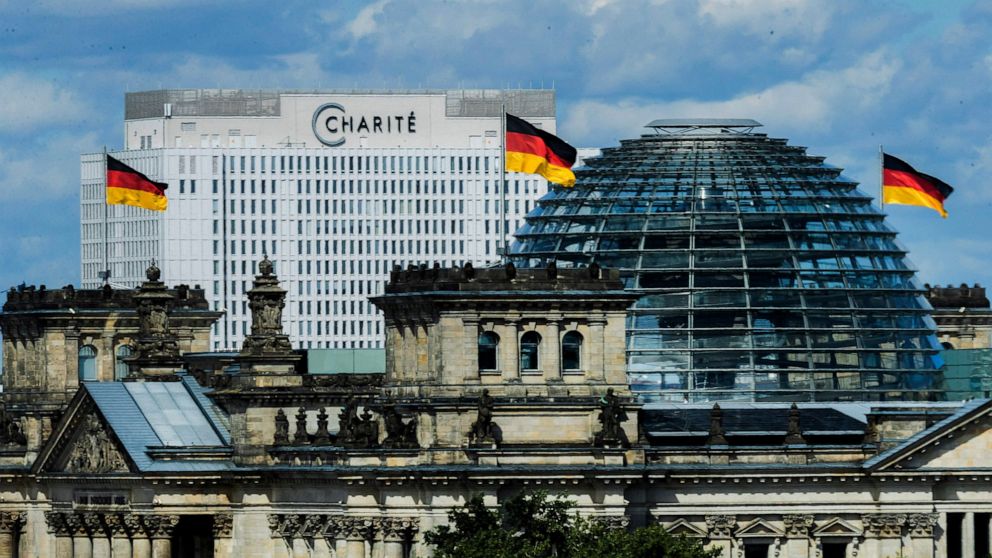 BERLIN — German doctors treating Russian opposition leader Alexei Navalny for a suspected poisoning say the dissident is still in an induced coma but his condition is stable and his symptoms are improving.

Navalny, a corruption investigator who is one of Russian President Vladimir Putins fiercest critics, fell ill on a flight back to Moscow from Siberia about a week ago and was taken to a hospital in the Siberian city of Omsk after the plane made an emergency landing.

He is being treated with the antidote atropine. Charité said Friday that there has been some improvement in the symptoms caused by the inhibition of cholinesterase activity.

While his condition remains serious, there is no immediate danger to his life, the hospital said. However, due to the severity of the patients poisoning, it remains too early to gauge potential long-term effects.

Fox parts ways with host who showed up to...

Fox News parted ways with a host who had shown up to work visibly sick in mid-March, a spokesperson confirmed to The Hill Thursday.Heather Childers, who hosted "Fox & Friends First," the firs...
Read more

Both sides will soon have to decide when and how they compromise, or whether they are willing to walk away.
Read more

Donald Trump’s WHO Letter About China Explained: An Annotated...

President Donald Trump excoriated the WHO and its director-general in a letter about the agency's response to COVID-19 and handling of China. Here, Newsweek adds more context to the letter.
Read more

‘Very Unlikely’ GOP Can Have Full-Scale Convention Like Trump...

North Carolina's governor has warned President Donald Trump that it's "very unlikely" he will get to hold the full-scale GOP convention he wants in Charlotte in August.
Read more

Astronauts are spending Father’s Day in space watching the...

Some dads are cool, but others are simply out of this world.
Read more

Lift the lockdown? Not so fast, warn fearful Italians

As Italy eases some lockdown measures on Tuesday, some shop owners and workers tell NBC News they’re anxious that the restrictions were being lifted too soon.
Read more

Studies suggest about half of COVID-19 transmissions can be traced back to individuals in the so-called pre-symptomatic stage. Dr. Neeta Ogden joins CBSN to discuss what daily testing for every American could look like in the fight to end the pandemic.
Read more

Senate Republicans are considering approving a short-term extension of boosted federal unemployment benefits, just days before the payments are scheduled to expire for millions of Americans. Out-of-work Americans are currently getting $600 per week in extra b…
Read more

Trump’s Name Will Be on the Prepaid Stimulus Debit...

"I'm pleased to show you what a debit card looks like with your name on it, Mr. President," Steve Mnuchin told Trump.
Read more

Forecasters said Kauai would see the worst of Hurricane Douglas in the evening, possibly after dark.
Read more

Five things you need to know about the coronavirus pandemic this Thursday evening.
Read more

Corning Gorilla Glass is a brand name consumers may or may not be familiar with, but they've almost certainly come in contact with the company's products.
Read more

Covid: Students with a reasonable excuse can go home,...

Scottish government minister Richard Lochhead says that students whose "mental health has been threatened because of the current situation" can go back to the family home.
Read more

Where Biden and AOC’s Policies on Climate Change, Immigration...

AOC, who endorsed Senator Bernie Sanders in the primary, pledged to support the Democratic nominee and committed to voting for Biden.
Read more

The Duke of Edinburgh took part in a ceremony to mark his retirement from a long-held ceremonial position in the military.
Read more

About 24 hours after George Floyd's death, hundreds packed the streets of Minneapolis, many gathering at the intersection where Floyd was pinned to the ground by police officers shortly before he died.
Read more

President Donald Trump has previously claimed Joe Biden and his son, Hunter, are part of a crime family.
Read more

Lyft Driver Who Suffered Racist Abuse Over Mask-Wearing in...

David Kangogo has tested positive less than a week after a passenger hurled racist abuse at him for being asked to wear a mask during a ride.
Read more

‘COVID parties’ sound alarming, but are they really happening?

Even with no fans, game presentation provides some comforts...

Welcome to Pandemic Basketball. The NBA rolled out what game operations in a bubble will look like as four scrimmages were played on Wednesday.
Read more

The US Postal Service on Friday agreed to terminate its controversial election mailer in Colorado, according to Secretary of State Jena Griswold, who had sued Postmaster General Louis DeJoy and other USPS officials over the pre-election mailer that she said i…
Read more

Koala populations are in decline due to increased human...

Key stressors that negatively impact koalas -- such as bushfires, habitat fragmentation, vehicle collisions and dog attacks -- have been getting worse in the last decade. That has led to population decline and increased disease among koalas.
Read more

Bareilles, who is the executive producer of the new show "Little Voice," said she is "so grateful" to have known Cordero.
Read more

A South Carolina man furious that his ex-girlfriend went to the beach with another man fatally shot her and her two daughters before turning the gun on himself, authorities said.
Read more

News outlets not traveling with Trump over COVID-19 concerns

Several media outlets decided not to travel on Air Force One with President Trump as he left for the campaign trail, citing concerns over his recent contraction of COVID-19, despite him being medically cleared by his physician to return.
Read more

Coronavirus: Nicola Sturgeon warns against 'intimidating' people back to work