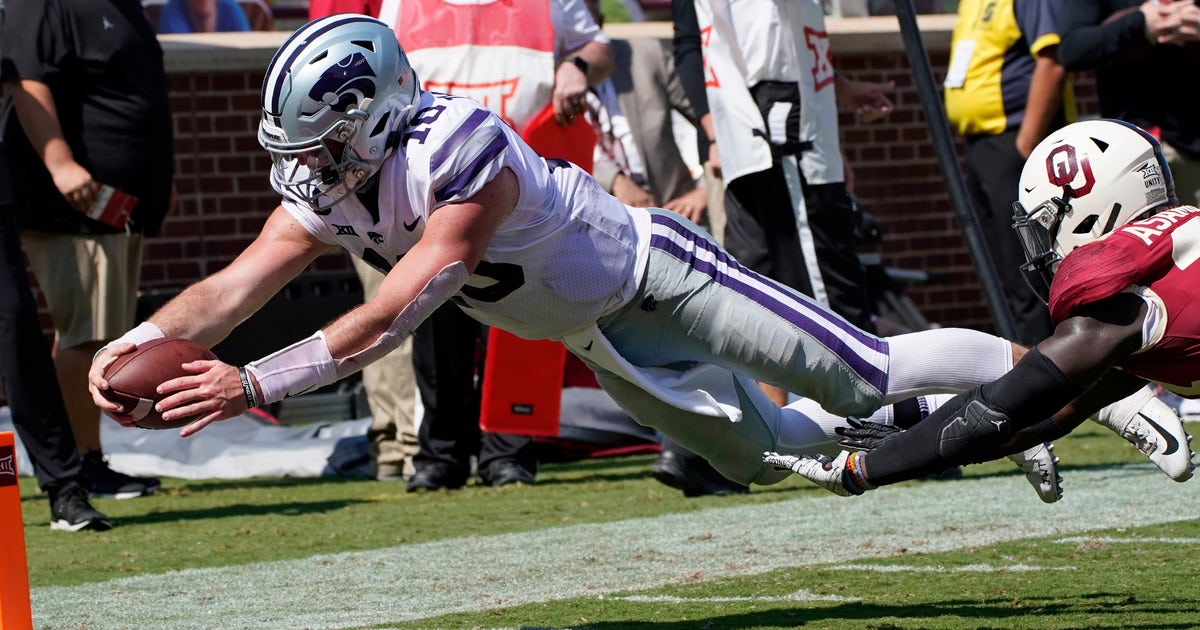 NORMAN, Okla. Skylar Thompson passed for 334 yards and ran for three touchdowns, and Kansas State rallied from 21 points down to beat No. 3 Oklahoma 38-35 on Saturday.

Freshman Deuce Vaughn caught four passes for 129 yards and ran for a touchdown for the Wildcats, who were coming off a season-opening loss to Arkansas State. It was Kansas State’s first-ever road win against a top-three team in the AP poll.

Kansas State said earlier in the week it was struggling to have enough players available at all position groups to play the game because of COVID-19.

In the opening moments of the second quarter, Rattler threw into traffic and found Drake Stoops for a 32-yard touchdown. It was the first career touchdown for the son of former Oklahoma coach Bob Stoops, and it gave the Sooners a 14-0 lead.

Thompsons 39-yard touchdown pass to Chabastin Taylor in the second quarter cut Oklahomas lead to 14-7, but the Sooners answered with Marvin Mims‘ 9-yard touchdown reception in the final minute of the first half.

Rattlers 53-yard pass to Stoops led to Seth McGowans 5-yard touchdown run and a 35-14 lead late in the third quarter.

Two short rushing touchdowns by Thompson got the Wildcats back in the game. Kansas State’s Nick Allen blocked Reeves Mundschau‘s punt, and the Wildcats took over at the Oklahoma 38. Vaughn’s 38-yard touchdown run on the Wildcats’ second offensive play and the extra point tied it at 35 with 8:17 to play.

Kansas State: The Wildcats didn’t fold when they fell behind, and the defense improved in the second half against Rattler.

Oklahoma: The defense fell apart much like it has many times in recent years.

Oklahoma: Travels to Iowa State on Saturday. The Cyclones beat the Sooners three years ago and nearly upset them last year before falling 42-41.

Olympic Runner Whose Grandfather is on ‘Last Breaths’ From...

"As my grandfather lies in a bed struggling to take his last breaths due to Covid, I'm not sure I've ever read anything more offensive or tone deaf in my life," Kara Goucher wrote of the president's coronavirus tweet.
Read more

Brittany's mom Robin makes a terrifying discovery at her daughters apartment. The pregnant 25-year-old is found strangled and stabbed to death on her bedroom floor... her small home ransacked. Could this be a burglary gone bad, or cold-blooded murder?
Read more

Donald Trump and Woody Johnson act as if the...

Michael D'Antonio writes that the public got yet another example of President Donald Trump's remarkable ability, and willingness, to exploit opportunities for personal gain when it was reported that he used America's ambassador to Great Britain to ask for his…
Read more

Technology becomes most targeted industry by cybercriminals in 2019

South Korea has reported 40 new cases of the coronavirus, its biggest daily jump in nearly 50 days, causing alarm in a country where millions of children were returning to school
Read more

At a moment when people are reassessing racial and cultural caste -- and reexamining their insensitivity toward others -- it's worth revisiting the legacy of Sacha Baron Cohen's errant, mustachioed character, Borat, who returned in a sequel on Friday.
Read more

Brad Parscale, President Trump's campaign manager, said 300,000 tickets have been registered for the campaign's upcoming rally in Tulsa, Okla.Parscale said the event is going to be "epic" and that the campaign is "...
Read more

Walmart Inc is selling its Indian wholesale business to Flipkart, the e-commerce startup it controls, consolidating its operations in a bid to fend off competition from JioMart and Amazon.
Read more

Trump says he will renew effort to end DACA...

The president denounced the Supreme Court's ruling that the administration improperly ended the DACA program in 2017.
Read more

According to Oddschecker.com, Biden is currently the favorite to win the debate, to be held at Case Western Reserve University and the Cleveland Clinic, in Cleveland, Ohio.
Read more

Dont know much about the keto diet? Well, for starters, its extremely popular and a favorite of celebs like LeBron James, the Kardashians...
Read more

USS Theodore Roosevelt returning to sea after being sidelined...

The USS Theodore Roosevelt is making final preparations to head out to sea this week after thousands of crew members tested positive for the coronavirus, but sailors continue to test positive after recovering from the virus. David Martin reports.
Read more

Kamala Harris’ Popularity Surges Across Board After Biden Pick:...

It was only among Republicans that Kamala Harris' popularity saw minimal growth.
Read more

Tucker: Our leaders ‘wasted literally years accusing each other...

Tucker Carlson opened his program Tuesday night by bashing proponents of the Russia collusion narrative, saying  China was the biggest beneficiary of the controversy that engulfed the first two years of the Trump presidency.
Read more

Microsoft to reveal Halo Infinite and other upcoming Xbox...

Microsoft on Thursday revealed what games will be available on the next-generation Xbox Series X.
Read more

English, German clubs on opposite ends of Europa League...

President Donald Trump claims the US is in "good shape," as coronavirus cases make record spikes throughout the nation. CNN's Anderson Cooper explains why this isn't true.
Read more

Joe Biden revealed some details on his proposal to improve healthcare and earned an endorsement from a major Medicare for All advocate.
Read more

Lana Purcell disappeared from the Wellesley Road area in Camden in 2011.
Read more

Coronavirus May Spread via Pillows Used by Presymptomatic COVID-19...

A new study found the virus contaminated several key surfaces in a hotel room in less than 24 hours, despite the patients not yet showing any symptoms.
Read more

With less than two weeks before Nov. 3, some senators confident in their chances are choosing to avoid the debate stage.
Read more

Trump claims not to be following Maxwell case despite...