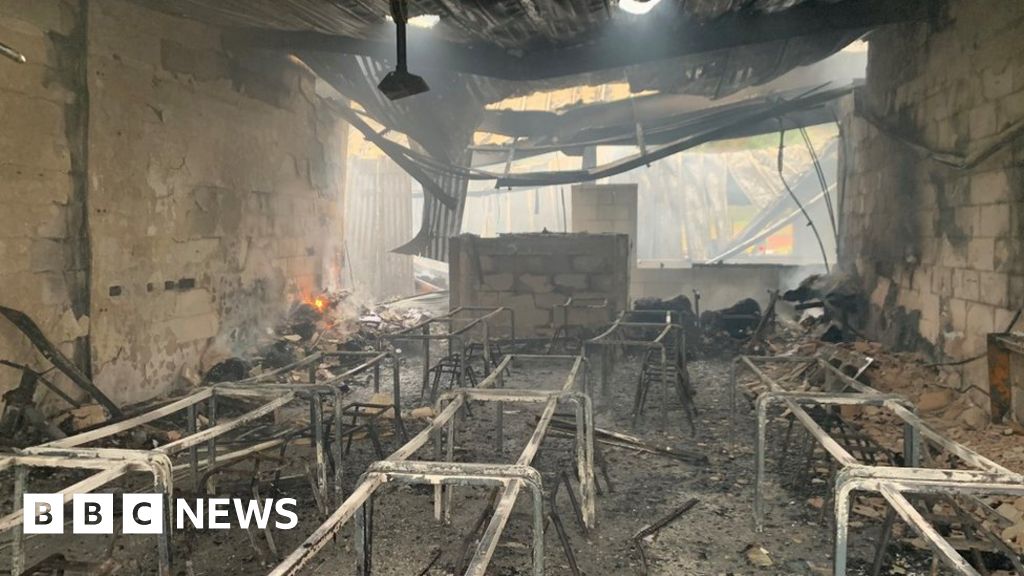 image captionFire crews were called to the scene shortly before 05:30 BST

A “devastating” fire has ripped through a Derbyshire school resulting in the “total loss” of a building.

Six fire engines spent the day tackling the blaze at St Mary’s School in Darley Abbey after being called to the scene shortly before 05:30 BST.

Derbyshire Fire and Rescue Service said: “On arrival firefighters were met with a well-developed fire.”

In a tweet, St Mary’s said: “Thank you for all the kind messages of support we have received.”

image captionThe fire ripped through classrooms as the school

“The strength and faith of our school community and Trust will help us through this difficult time,” the spokesperson added.

Gavin Tomlinson, chief fire officer for the fire service, said: “Another devastating school fire total loss of the building despite fantastic efforts by crews from DerbyshireFRS.

“We need to protect vital buildings like this with sprinklers.”

Road closures were put in place around the school and residents were urged to keep their windows closed because of the smoke at the height of the blaze.

The U.S. Chamber of Commerce on Friday announced its support for Sen. Joni Ernst (R-Iowa) for reelection, adding her to the list of Republican Senate incumbents the powerful lobbying group is backing.Democrat There...
Read more

Preventing the next pandemic will cost $22.2 billion a...

Better protections of forests, wildlife trade monitoring and research into diseases are needed to prevent a repeat of a zoonotic disease outbreak.
Read more

A new Samsung Galaxy Tab S7 leak has made the tablet look a little less premium than we expected.
Read more

Rather than respond to the procedural nightmare Judge Sullivan has created, Flynn's lawyer is trying to go over his head.
Read more

Top Democrat calls for oversight of Trump’s demand for...

House Ways and Means Committee Chairman Richard Neal (D-Mass.) on Wednesday called for oversight of President Trump's demand that the Treasury Department examine the tax-exempt status of universities and school systems.In letters to the IRS and...
Read more

A Georgia state trooper was arrested and charged for murder on Friday after he fatally shot a 60-year-old man who allegedly tried to flee during a rural traffic stop.The Georgia Bureau of Inve...
Read more

A haul of $141 million is reported for June.
Read more

Tiger Woods is facing a new reality, wherever he...

Large crowds have followed Tiger Woods throughout his entire golf career, until now. His reaction to the silence will speak volumes.
Read more

Three House Democratic chairs are calling for government watchdogs in the Trump administration to investigate the use of federal force against recent protests over police brutality and racial inequality. ...
Read more

The Children of 9/11 Are About to Vote

What the youngest cohort of American voters thinks about politics, fear and the potential of the country they’ve grown up in.
Read more

"I believe that she’ll give McConnell a run for his money," he says.
Read more

Donald Trump ‘Not a Fan’ of Meghan Markle After...

The U.S. President piled pressure on Meghan Markle and Prince Harry as the couple faced calls in Britain to be stripped of their royal titles.
Read more

Ruby Rose leaves Batwoman – and other stars who...

Ruby Rose's departure from Batwoman is the latest in a string of actors who have exited big roles.
Read more

Ex-utility exec pleads guilty to $1B fraud in South...

What’s next: How UK’s election Thursday will affect Brexit

The election taking place in the U.K. on Thursday will bring a new Parliament to power and determine the course of Brexit
Read more

The president’s about-face replaced his dismissive tone about the pandemic with a stark new warning and a mostly disciplined message — for now.
Read more

Gorilla Glass Victus Will Be a Lot More Scratch-Proof

The new smartphone glass is the first significant improvement in scratch prevention from Corning's team in seven years.
Read more

OnePlus might be cooking up an AirPods rival for...

According to a new rumor, OnePlus could join the true wireless earbud club with a new AirPods rival coming in July.
Read more

Jewish community leaders in Warsaw on Tuesday voiced their opposition to the “dehumanizing” language they say is being used against LGBTQ people in Poland.
Read more

India has registered a single-day spike of 74,442 new coronavirus cases, driving the country’s overall tally since the pandemic began to 6.6 million
Read more

As the global race for a coronavirus vaccine continues, China, Russia and the United Arab Emirates are allowing their citizens to get vaccinated with an experimental vaccine before clinical trials wrap up. Internal medicine specialist and immunologist Dr. Nee…
Read more

Oregon, Scorched By Fire, Braces for Floods as California...

While Oregon badly needs the rain to help fight raging wildfires, the storm could bring a deadly new danger to the region.
Read more