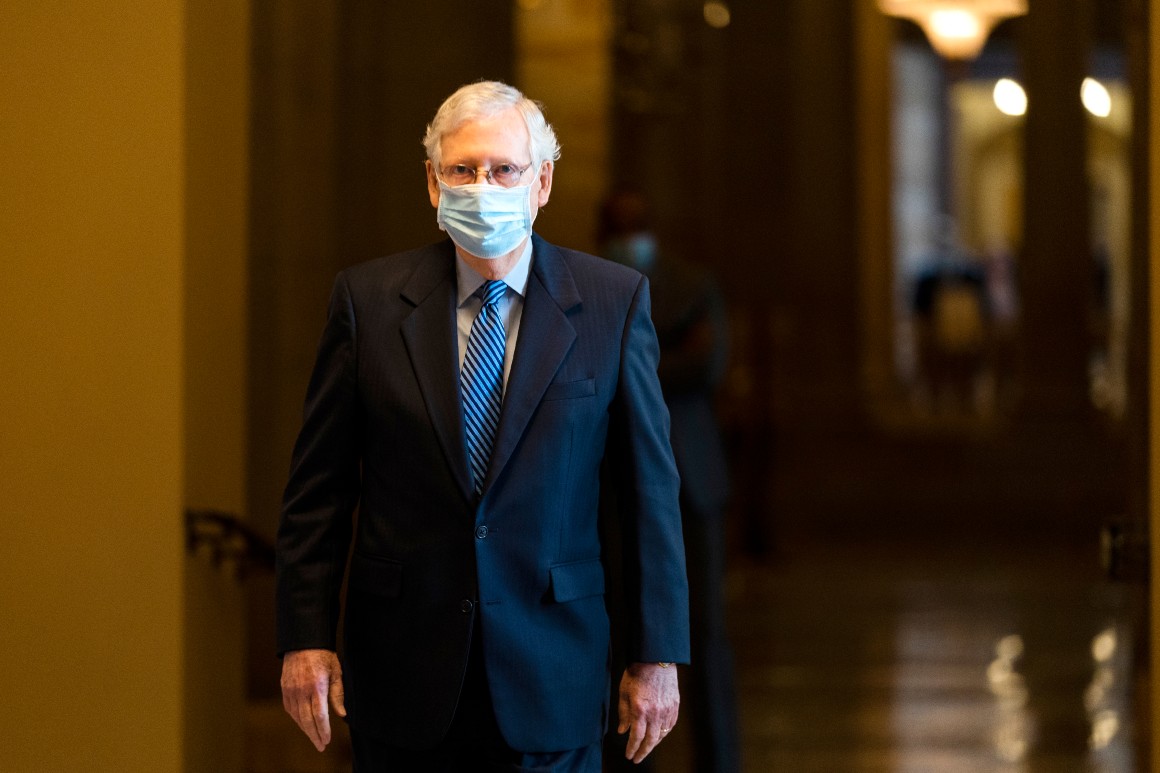 McConnells remarks come after President Donald Trump has sent mixed signals about whether he wants Congress to pass a coronavirus relief package. Earlier this week, Trump tweeted that he told key negotiators for the White House that he wanted to wait until after the election to come to a deal. But hours later, Trump called on Congress to pass standalone bills for a range of issues, including airline relief and stimulus checks.

Speaker Nancy Pelosi (D-Calif.) and Treasury Secretary Steven Mnuchin spoke Wednesday, but Pelosi has shot down providing aid to the beleaguered airline industry, which is facing massive layoffs, outside of a larger bill.

For months, Congress has struggled to come to an agreement on providing additional coronavirus relief. Among the biggest sticking points remains the price tag for a coronavirus relief package. House Democrats earlier this month passed a $2.2 trillion coronavirus relief bill, but Senate Republicans have expressed concern about the deficit and most are unlikely to support a proposal that far exceeds $1 trillion.

Senate Republicans introduced a more narrow, coronavirus relief bill in September, which received near unanimous support from the GOP caucus, but was blocked by Senate Democrats.

McConnell said Friday that we do need another rescue package but added that the differences of opinion about what is needed at this particular juncture are pretty bad.

A week and a day after Justice Ruth Bader Ginsburg’s death, President Trump nominated a replacement for the iconic jurist.
Read more

Fight near Starbucks leads to death of California man,...

A 69-year-old California man died Wednesday, three days after being involved in a physical altercation outside a Starbucks coffee shop, according to reports.
Read more

‘Evil’ Season 2 Netflix Release Date: When the Next...

"Evil" has been a hit for Netflix since it was released earlier this month—and Season 2 should be coming to the streamer and CBS very soon.
Read more

CNN crew backed out of an area after a...

A CNN crew was confronted by protesters over the weekend in Atlanta, with reporter Natasha Chen telling anchor Wolf Blitzer that the crew decided to "back out of the area" after people "got aggressive" and broke its camer...
Read more

America’s ambassador to the UK has taken to Twitter to defend his reputation, rejecting allegations that he made insensitive remarks on race and gender
Read more

Fauci: I was not invited to Trump’s coronavirus briefing

Lyft and the Rape, Abuse and Incest National Network announced a pilot program Tuesday aimed at providing victims of sexual violence with resources to flee from their abusers.
Read more

Easy, fun and delicious ways to get healthy this...

With the brighter, longer and hotter days of summer upon us, it's really a perfect time to maintain your health and fitness. The season invites us to eat a little lighter and be more active outdoors.
Read more

Houston Texans wide receiver Kenny Stills told reporters on Monday that he thinks that the NFL could have helped save "so many lives" if it embraced players' kneeling protests against racial injustice sooner.Stills...
Read more

Most Americans, Regardless of Political Alignment, Want a Third...

However, many electoral roadblocks stand in the way of making a third party truly viable in American politics.
Read more

The House on Thursday approved a bill that would ban Transportation Security Agency (TSA) officials from downloading social media app TikTok onto government-issued devices.The ban was approved as...
Read more

Ruby Rose leaves Batwoman – and other stars who...

Ruby Rose's departure from Batwoman is the latest in a string of actors who have exited big roles.
Read more

Amid pandemic, consumer goods sales hold up at Unilever

Man accused of stealing bulldozer to tear down Biden...

Live Nation to use concert venues as polling places

Live Nation is exploring over 100 concert venues across the country to serve as polling places in the upcoming November elections.The Wiltern and the Hollywood Palladium in Los Angeles, Emo's in Austin, Texas, and...
Read more

Adobe scrambled to deliver urgent patches for bugs in...

German doctors treating Russian opposition leader Alexei Navalny for a suspected poisoning say the dissident is still in an induced coma, but that his condition is stable and his symptoms are improving
Read more

While advocates have made strides in getting Native American symbols and names changed in sports, they say there's still work to do mainly at the high school level, where mascots like Braves, Indians, Warriors, Chiefs and Redskins persist.
Read more

California Senator Kamala Harris is cutting expenses and reshaping her presidential campaign, with the hopes of boosting her standing in Iowa ahead of February's caucus. CBS News political correspondent Ed O'Keefe spoke to CBSN's "Red & Blue" about the news.
Read more

David Shaw, the head football coach at Stanford, joined Rob Stone and the Big Noon Kickoff crew to provide his perspective on the. Black Lives Matter movement and what it means to him and his football team. Shaw said all he wants is to be able to provide a pl…
Read more

Biden’s Win in South Carolina a Boost Before Super...

Former Vice President Joe Biden got his first opportunity on Saturday, in South Carolina, to deliver a victory speech in his quest for the 2020 Democratic presidential nomination. Photo: Jim Watson/AFP via Getty Images
Read more

Another death row inmate in California died at the hospital on Monday amid an outbreak of the coronavirus at the San Quentin State Prison, officials said.
Read more

Jews prep for a pandemic Passover: Smaller but no...

New Zealand held its own election debate after Trump...

While Trump and Biden tore strips off each other before a horrified TV audience, the two alternatives for New Zealand prime minister held an election debate which could not have been more different.
Read more

In the UAE, Mubadala Aerospace is shifting its operations from airplane parts to surgical masks. They expect nearly a billion orders for N95 masks over the next five years. CNN's John Defterios reports.
Read more

Officials looking into video of ICE stopping a Black jogger