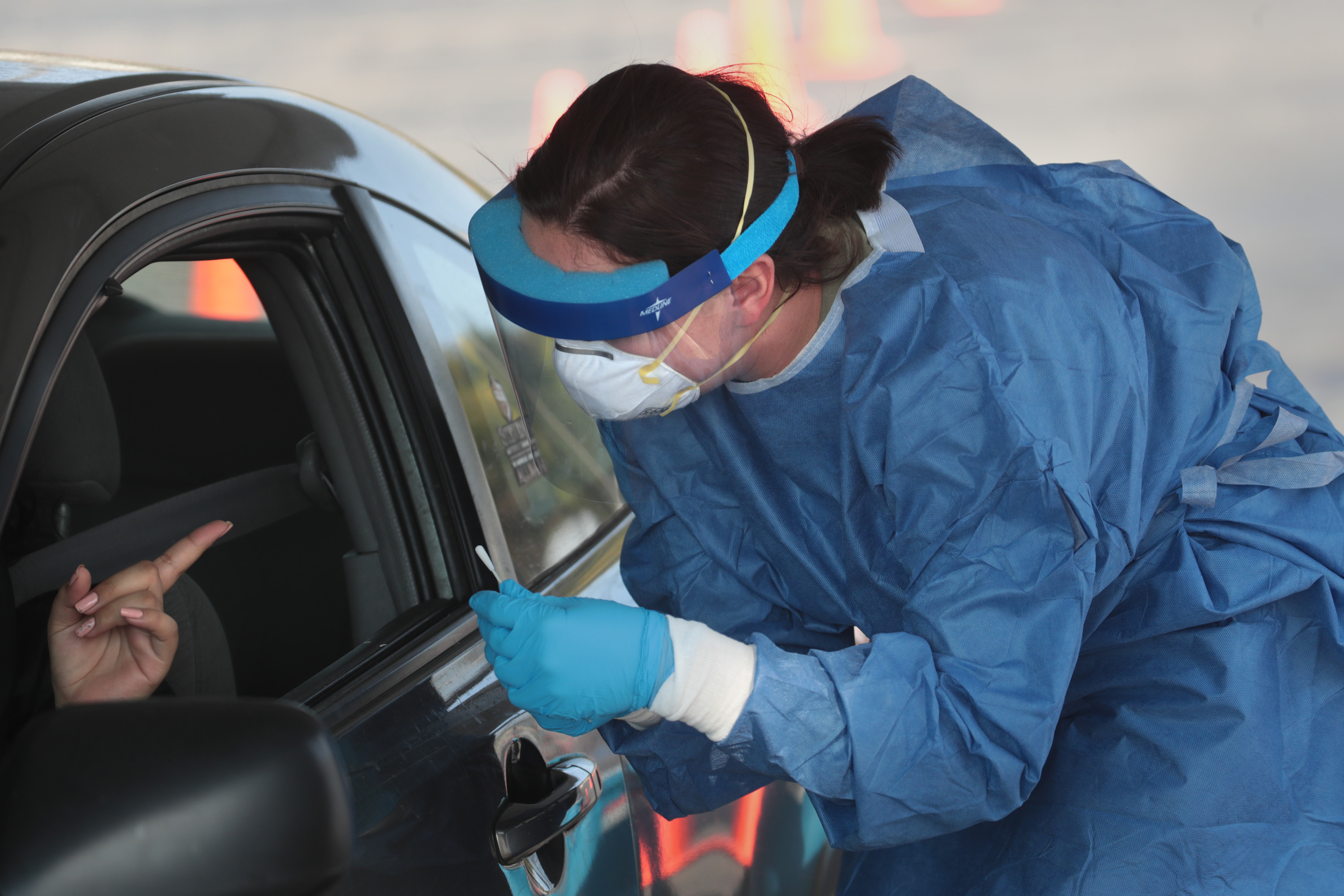 Amid significant upticks reported across more than half of the country, Hawaii and Vermont, both of which saw relatively mild outbreaks this year compared to other states, are seeing significant improvements in their COVID-19 numbers. In Hawaii, confirmed daily cases have declined since health officials reported a spike in late August and early September. On Monday, the state’s seven-day average stood at 79 cases, down more than 20 percent from the average reported two weeks prior. Its average daily fatalities had decreased by 25 percent over the same time period.

Although Vermont’s average case count increased compared to numbers reported two weeks ago, due to a spike recorded October 5, when the health department confirmed 32 new cases, its latest figure was down more than 10 percent from last week. Only 58 deaths have been confirmed in Vermont due to COVID-19 since the onset of the pandemic.

Friday marked the first time more than 70,000 new cases were confirmed across the U.S. in a single day since July 24, as the nation’s weekly moving average topped 55,000 diagnoses per day. By Monday, the Times database placed the average at 56,615 daily cases, while Johns Hopkins University’s statistics suggested it was closer to 60,000. Both figures indicate the U.S. is currently confirming positive COVID-19 tests at rates similar to those observed during the summer’s spike, while some health experts warn of an oncoming third wave. The latest average represents a 30 percent increase from the average reported two weeks ago.

As of Monday morning, more than 8.1 million people have tested positive for COVID-19 in the U.S., and close to 220,000 have died in connection to the disease, according to Johns Hopkins University’s data. Once the COVID-19 outbreak’s global epicenter, the U.S. continues to hold the highest infections count of any affected country, followed by India, Brazil, Russia and Argentina.

A Berlin district has ordered a local Korean group to remove a statue commemorating women used as sex slaves by Japan during World War II, saying Friday it goes beyond what had been approved
Read more

Mayra Ramirez, 28, said her family made the trip to Chicago with the intention of saying goodbye.
Read more

Redmi India will be soon launching a new audio product in the country, the teaser for the same was posted on Twitter recently.
Read more

A Republican state senator has said he doesn't believe in the QAnon conspiracy theory despite having the movement's slogan on his car.
Read more

Barrett to sit with McConnell and other GOP senators...

Trump hits the swing states, even with campaign battle...

President Trump heads to Michigan on Thursday to tour a Ford Motor Company plant that’s producing ventilators for hospitals in the battle against the coronavirus pandemic.
Read more

Bernie Sanders Most Popular in New York State, But...

My Sister, Lisa Montgomery, Took a Life. Her Own...

Lisa was born with brain damage. As children, both of us were raped, repeatedly. I was rescued; she went on to a lifetime of mental illness, beatings and torture. Now she's on federal death row.
Read more

Borussia Dortmund keep up the pressure on Bundesliga leaders Bayern Munich ahead of Tuesday's clash between the two with a hard-fought victory at Wolfsburg.
Read more

President Trump on Friday celebrated an unexpected drop in the unemployment rate, calling it "incredible" and crediting his administration for the gains.Trump tweeted repeatedly about the federal jobs report minute...
Read more

Ruby Rose is stepping away from the titular role of the CW's 'Batwoman.' The actress said in a statement, 'This was not a decision I made lightly.'
Read more

China on Friday congratulated President-elect Joe Biden and Vice President-elect Kamala Harris for winning the U.S. presidential election, nearly a week after they were projected to win the race for the White House agains...
Read more

Companies will soon be able to have their logos displayed in Gmail and hosts in Google Meet will have more control over their meetings.
Read more

The Minnesota Health and Education departments defended a children's book about racial injustice after a law enforcement trade organization in the state claimed it demonizes police officers.Th...
Read more

Republicans are urging President Trump to get involved in boosting the GOP candidates in two Senate races in Georgia, where he's narrowly trailing President-elect Joe Biden as the Senate majority hangs in the ba...
Read more

It's 80s night in the "Dancing With The Stars" ballroom.
Read more

Biden, under pressure on ‘court packing,’ says he would...

A construction company that has been repeatedly touted by President Donald Trump and his allies has been awarded a major border wall construction contract valued at more than $1.2 billion, a US Army Corps of Engineers spokesperson told CNN on Tuesday.
Read more

Arkansas grandmother accused of seeking to kill ex-son-in-law in...

A 69-year-old Arkansas woman has been arrested in an alleged murder-for-hire plot charging her with trying to hire an FBI undercover agent posing as a hitman to kill her ex-son-in-law.
Read more

Young patient caught coronavirus at party, spread it to...

Parkland Hospital in Dallas, Texas, was caring for about 170 coronavirus patients as of Monday, though one case in particular shed a cautionary tale.
Read more

The second highest ranking officer in the US Space Force has tested positive for coronavirus, the US Air Force said in a statement Wednesday.
Read more

Two potential coronavirus vaccines have shown promising results in early trials, but experts warn that some of the biggest hurdles still lie ahead.
Read more

Mike Holmgren Lashes Out at Trump’s COVID Response: ‘He...

The former Green Bay Packers coach blamed the president for the financial impact the coronavirus outbreak has had on many local economies.
Read more

Coronavirus-related hospitalizations are on the rise in a majority of states, a CNBC ...
Read more

3 children and an adult killed in New Jersey...

The five alarm fire at 867 Elizabeth Avenue killed three young girls and one adult, and one adult remains in critical condition as of Tuesday afternoon.
Read more

Escobar calls on Chad Wolf to resign over federal...

“He embodied the values of aloha and malama that we hold dear.”
Read more

Lowe's Memorial Day sale can save you up to 40% off on a range of appliances, tools, furniture, and more.
Read more

Randy Levine On The New York Yankees Planning Something...

Randy Levine, President of The New York Yankees, spoke with Brian Kilmeade about all the hard work that went into getting baseball to have a season in 2020 during the coronavirus pandemic. Levine says he is confident Major League Baseball will be able to comp…
Read more

"There is a compromise if the speaker [of the House] is willing to move forward," Steven Mnuchin said.
Read more

Muslims to wait a year for hajj as virus...

China and the European Union are pushing President Trump to restore funding to the World Health Organization (WHO) after he announced late Tuesday that financial support would be halted pending a review of its response to the coronavirus pandemic....
Read more