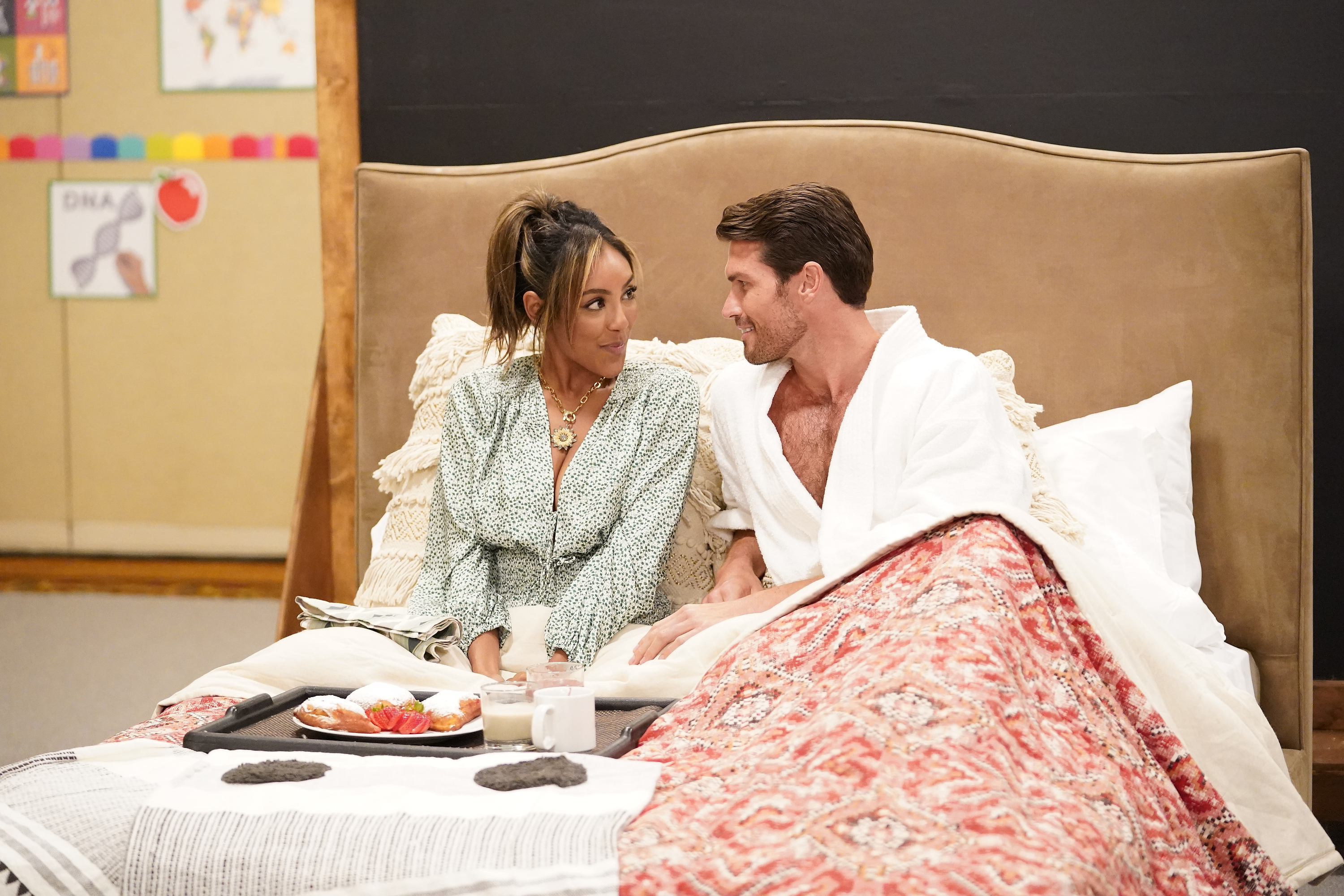 Taysha Adams has an ex-husband, and there’s a pretty good chance viewers will see him on this season of The Bachelorette. Though Adams divorced Josh Bourelle in 2017, there’s reason to think he’s going to try to win Adams back—or create other drama—thanks to a TikTok and a Bachelorette promo slip-up.

TikToker @bigmoodbb was the first to notice Bourelle is actually named in Adams’s season promo, which was uploaded to the Bachelorette Twitter account on November 10. With subtitles turned on, it becomes clear that “Josh Bourelle” is speaking about Adams. Immediately after the dialogue, which doesn’t feature the man’s face, Adams breaks down in tears.

“It’s only a matter of time before she realizes the truth,” the voice says.

Fans were let into the downfall of Adams’s first marriage on Tuesday night. On her first one-on-one date with Brandon, Adams opened up about the split. She said she was married young and there was infidelity on Bourelle’s part. While she spoke from a place of strength, Adams admitted she lost parts of herself in the relationship that she only discovered again when single.

After the divorce, Adams was seen on Colton Underwood’s season of The Bachelor, as well as a season of Bachelor In Paradise, where she fell for fan-favorite John Paul Jones. Now, in replacing Clare Crawley as Bachelorette, it seems Adams has a good group of men and tons of potential to find love. So will Bourelle really try to mess it up?

From his social media presence, it looks like Bourelle currently has a girlfriend who is not Adams. Bourelle’s own Instagram account is private, but he issued an interesting statement on November 10, the day Adams debuted her Bachelorette reign, via his roofing company’s Instagram account. In it, he mentioned his girlfriend.

“I am personally thankful that 2020 has for the most part been very good to me,” he wrote. “In both my personal life and career I can truly say that I have found happiness and contentment. I have some amazing friends, a very supportive family, and most of all a girlfriend that has made me a better person, and has stood by my side and supported me through thick and thin. I love you Steph and I am truly blessed to have you as my life partner. I love you very much, and I can’t wait for what the future has in store for both of us.”

Bourelle didn’t mention how long the pair have been together. Adams filmed her Bachelorette season over the summer, so it’s possible Bourelle was single at the time.

Money worries affected the mental health of half of Scotland's students before the pandemic, according to a new survey.
Read more

Philadelphia’s top Republican election official pushed back on the Trump team’s claims of voter fraud in his city, assuring that it is “totally untrue” observers were not allowed in vote-counting rooms.
Read more

KT McFarland: Why ‘nothing makes sense’ about the Susan...

"There are a lot of pieces in this puzzle and they’re all starting to come together," said former deputy national security adviser KT McFarland.
Read more

Google has made it easier to find the perfect...

New search tools will help you express yourself on a scale of Lionel Messi to Marilyn Monroe.
Read more

The following is a transcript of an interview with House Speaker Nancy Pelosi that aired Sunday, July 26, 2020, on "Face the Nation."
Read more

Research from the South Korean Center for Disease Control suggests patients who recovered from COVID-19, but then tested positive for the virus again, are not able to spread the virus to others.
Read more

The crash in shark numbers, caused largely by over-fishing, could have dire consequences for corals.
Read more

Major League Baseball and the manufacturer of the jerseys worn by its players are partnering to produce much-needed hospital gowns and protective masks out of the material used to make the uniforms.
Read more

The steps face blowback from those who que.stion the science behind mask
Read more

Ilhan Omar fires back at Dem colleagues for urging...

Rep. Ilhan Omar, D-Minn., fired back on Thursday at Democratic colleagues who suggested she and other members of the progressive squad had weakened the party by dragging it too far to the left.
Read more

WHO director calls Covid-19 surge across Europe a ‘wake-up...

More than 30 million coronavirus cases have been reported globally, according to John Hopkins University data, as the WHO warned about cases rising in Europe.
Read more

Aishwarya Rai Bachchan and daughter have tested positive for...

Learn about how garden gnomes were first crafted in 19th-century Germany before launching them from a catapult.
Read more

British Prime Minister Boris Johnson said reimposing lockdown measures in the UK would not be necessary in an ...
Read more

Loeffler remarked "COVID stood NO chance against @realDonaldTrump!" on the WWE tweet showing Trump appearing to fight the novel coronavirus that has killed over 7,100 Georgians.
Read more

Rand Paul calls for Cuomo to be impeached over...

Sen. Rand Paul (R-Ky.) called Wednesday for the impeachment of New York Gov. Andrew Cuomo (D) over his handling of the state's coronavirus outbreak, saying, "the people we are lauding ar...
Read more

A Toronto police officer received public backlash Tuesday after he was spotted wearing a “Punisher” patch on his uniform during a press conference.
Read more

Carlson said at the end of the show that he would be leaving on a "long-planned" vacation to go "trout fishing."
Read more

You knew FIFA 21 was coming, but we now know the exact date for EA Sports next entry in its soccer sim series.
Read more

There will be no payroll tax cut sought by Trump in the new plan, GOP sources say.
Read more

Top Democrat: Congress could pass retirement bill as soon as this year