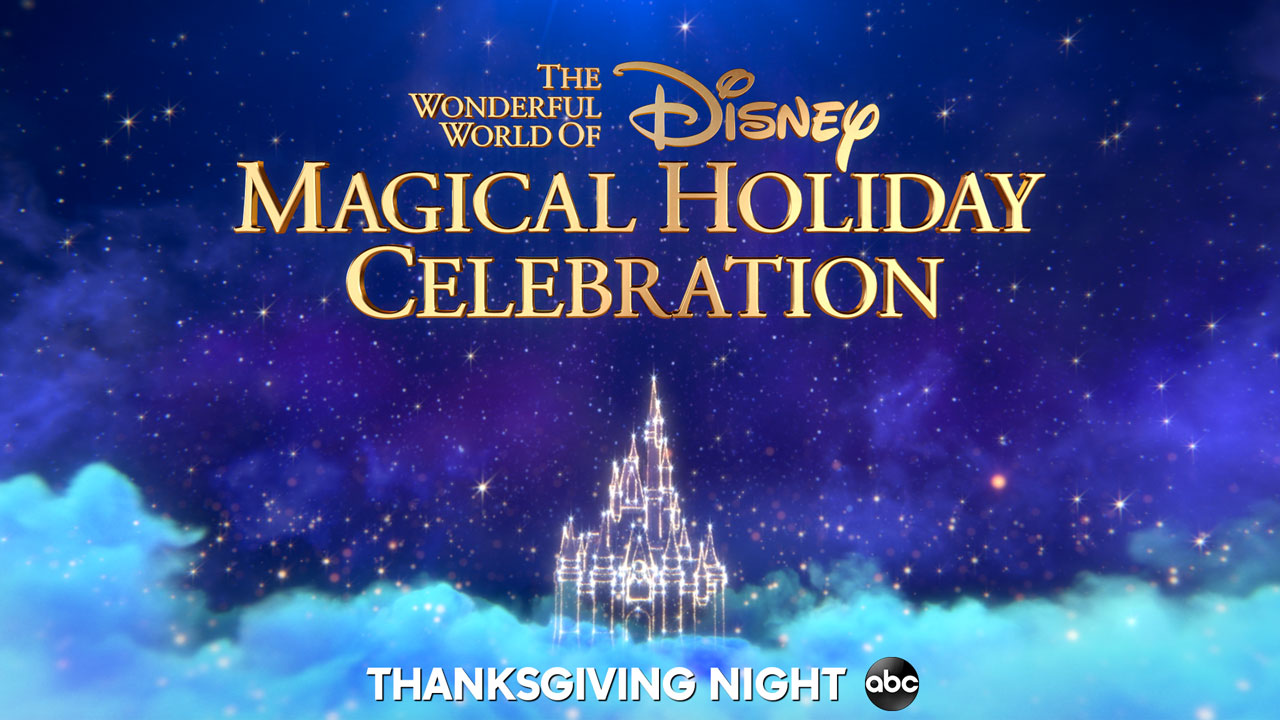 Just when we need it most, Disney kicks off the holidays with a special treat! The fifth anniversary edition of The Wonderful World of Disney: Magical Holiday Celebration, airs Thanksgiving night at 9/8c on ABC!

Original hosts Derek and Julianne Hough return, kicking off the night with a glittering new holiday performance, while Trevor Jackson (Freeforms grown-ish) hosts from Walt Disney World Resort in Florida. Together, they will take viewers on a wintry ride through fan-favorite performances from the past five years and new heartwarming family moments. Youll also get a brand-new sneak peek into Remy’s Ratatouille Adventure coming in 2021 to EPCOT in Florida.

In addition to magical holiday moments, viewers will also get a sneak preview of Disney and Pixars all-new feature-film Soul, before it becomes available exclusively on Disney+ (where Disney+ is available) beginning Dec. 25, 2020. Featuring the voices of Jamie Foxx and Tina Fey, Soul introduces a middles-school band teacher who teams up with a sarcastic new soul on a mission to figure out exactly what makes life worth living.

What performances are you most excited to see this year?

Looking for cheap gaming laptop deals? They don't get much better than this £599 HP Pavilion courtesy of the Amazon Summer Sale.
Read more

Academia Won’t Survive Without Black Scholars. To Keep Us,...

Black scholars shouldn't be punished for being themselves while white people masquerading as Black are rewarded.
Read more

Boris Johnson says COVID-19 has been a disaster for...

EU unveils plans to save vacations and avoid a...

Lucy Liu, Ken Jeong and other members of SAG-AFTRA call for an end to discrimination, xenophobia and hate crimes against Asian Americans linked to COVID-19.
Read more

Christian "prophets" and ministers across the U.S. are following up on their nearly unanimous prophecies proclaiming President Donald Trump would "without question" win re-election.
Read more

U.S. government will pay pharmaceutical firms almost $2 billion, with a pledge to provide the vaccines for free.
Read more

The rapper/designer/provocateur may have earned as many critics over the course of his career as he has fans. But West's mental health, which he has been open about, should be observed with sensitivity.
Read more

Correspondents association: ‘Outrageous’ for Trump to leave hospital without...

POLITICO Playbook: Are the W.H. and Senate Rs on...

And Joe Biden’s campaign goes up with a new ad in battleground states.
Read more

Beijing tightened its grip on the disputed area by ordering an administrative reorganization of the region's territories last week.
Read more

The battleground state of Pennsylvania is setting up to be a tight race in November, with President Trump in a statistical tie in theoretical head-to-head matchups with each of the top Democratic presidential candid...
Read more

The House will remove the portraits from the Capitol on Juneteenth, which commemorates the end of slavery in the U.S.
Read more

Once Brenden Knox got the ball, No. 16 Marshall was off and running.
Read more

Conservative radio host Rush Limbaugh told listeners Monday that there has been some progression of cancer. He announced in February that he had advanced lung cancer.
Read more

As the global coronavirus death toll hits a grim milestone, the medical community has at least learned lessons from the losses.
Read more

Tim Murtaugh: The Democrats & The Media Are Champions...

On Fox Across America with Jimmy Failla, Director of Communications for the Trump 2020 Campaign Tim Murtaugh explained why he think the Democrats and the media have become "cheerleaders" for China and the WHO. "The media cheerleads, they have chosen sides. Jo…
Read more

During his daily coronavirus briefing, New York Gov. Andrew Cuomo and his daughter, Mariah, announced the finalists for a public service announcement contest on why to wear masks in public.
Read more

Most Americans, Regardless of Political Alignment, Want a Third...

However, many electoral roadblocks stand in the way of making a third party truly viable in American politics.
Read more

EU faces knotty trade fights with US _ no...

UN official, in recording, talks of getting US ‘off...

A recording of a U.N. investigator talking about a system to speed up U.N. investigations that “gets the Americans off the U.N.’s back” and avoids the U.S. reducing its financial contribution is sparking fresh calls for the Trump administration to do exactly …
Read more

President-elect Joe Biden's transition team is turning to a group of former officials, who served in the Trump administration.
Read more

Anastacio Matavel was shot as he was driving in the southern city of Xai-Xai last year.
Read more

Lawyer for Ahmaud Arbery’s family speaks out against leaked...

A lawyer for the family of Ahmaud Arbery, the unarmed black man who was fatally shot in his neighborhood, is speaking out about leaked bodycam videos showing two incidents between police and Ahmaud three years ago. Omar Villafranca has the latest.
Read more

Japan is testing an app that lets sports fans...

With fans barred from stadiums due to coronavirus restrictions, sporting bodies around the world are grappling with how to create atmosphere at matches -- and the makers of a new app think they have the answer.
Read more

For LGBTQ youth, home might not be a safe...

With schools closed amid the coronavirus pandemic, some LGBTQ young people have lost crucial support systems and are self-isolating with unsupportive relatives.
Read more

"We are dedicating this season to Breonna Taylor, an outstanding EMT who was murdered over 130 days ago in her home," one player said. "We will say her name...We will be a voice for the voiceless."
Read more