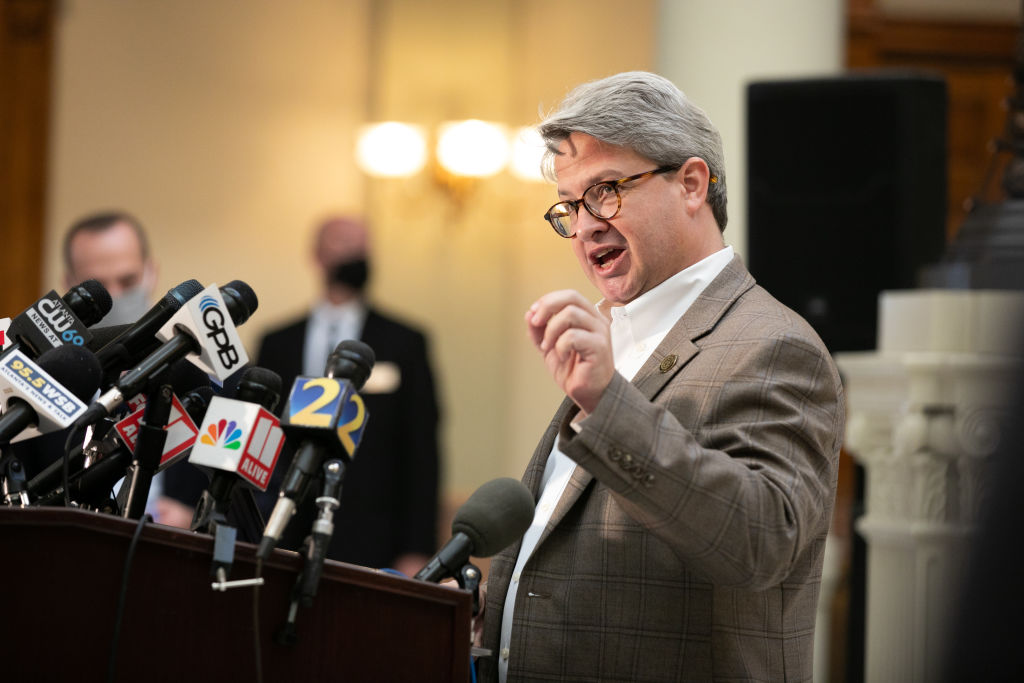 Although Georgia is carrying out a recount, the results show that President-elect Joe Biden narrowly leads President Donald Trump in the state by a margin of nearly 13,000 votes. Trump has refused to concede the election, claiming without evidence that Biden won the presidential election through widespread voter fraud.

Although Sterling said Trump has a right to continue legal challenges and ask for a further recount, he described criticisms from the White House as “wild mischaracterizations” with “no evidence.”

“The recount is going great. It’s tracking exactly right. What they’re focusing on is something we have no evidence of, is something about signature match and there’s a wild mischaracterization of a settlement agreement that we reached to stop from weakening signature match further,” Sterling told Fox News on Thursday.

The Republican official said that Trump should accept the Georgia results after he finishes all his legal challenges.

“When Donald Trump, once he gets through all his legal ability to do so [and challenge the results], if he comes up short in Georgia—hopefully he will see that the results is the result,” Sterling said. “Because when you question it from either side it undermines the foundation of democracy.”

Newsweek reached out to the White House for comment, but did not immediately receive a response.

Trump and White House Press Secretary Kayleigh McEnany have claimed over the past week that there are widespread problems with Georgia’s signature match process on absentee ballots.

“Must have signature check on envelopes now. Very easy to do,” the president tweeted Thursday morning.

Georgia’s Secretary of State Brad Raffensperger, a Republican who was endorsed by Trump in 2018, pushed back against these repeated claims from the president and his supporters in a Sunday Facebook post.

Gabriel Sterling, Voting Systems Manager for the Georgia Secretary of State’s office, answers questions during a press conference on the status of ballot counting on November 6 in Atlanta, GeorgiaJessica McGowan/Getty

Even if the recount in Georgia shifted the results in Trump’s favor—something Raffensperger has said is “unlikely”—Biden would still be the winner of the presidential election. Trump would have to overturn the results in multiple other states in order to win, which political analysts and some leading Republicans have dismissed as a possibility.

According to the election results by the Associated Press and Fox News, Biden leads in the Electoral College with 290 votes to Trump’s 232. If Georgia is called for Biden, as is expected, that would give Biden 306 electoral votes while Trump would remain with just 232.

It’ll Take More than an Election to Defuse the...

New federalism calls for redistribution and redefinition of state and federal power. These have been dismissed as pure fantasy—except that both are already happening.
Read more

TikTok is the most downloaded social media app during...

The report states that overall social media app downloads have increased by 20% compared to January 2020, reaching a total of 49 million on both iOS and Google Play platforms.
Read more

Martha Stewart talks us through the afternoon that pool...

One of the things that's getting in the way of clear and consistent messaging when it comes to Covid-19 in the US is the country's current divided state, Dr. Anthony Fauci said.
Read more

Top Al Qaeda operative was tracked and killed by...

The U.S. coordinated with Israel to track and kill Al Qaeda's No. 2 official in a shooting in Tehran in August, ...
Read more

‘Supernatural’ Season 15 Netflix Release Date: When It Will...

"Supernatural" Season 15 is about to air its final episode on The CW, meaning that the final season will soon be streaming on Netflix.
Read more

‘Trial by Media’ Explores The True Story That Inspired...

The CEO and founder of fitness company CrossFit on Tuesday announced his retirement after controversial comments about the death of George Floyd.
Read more

Coronavirus: Places of worship to reopen for private prayer

Churches, mosques and synagogues have been closed since lockdown restrictions were introduced in March.
Read more

Feed the Polls organizing thousands of meals for 2020...

For voters worried about their next meal, taking the time to stand in line for hours is a nearly impossible ask.
Read more

Houston students want to be heard in school reopening...

"We don't want our children to be lab rats," one student tells CBS News, in this latest COVID Chronicles report.
Read more

Of the nation's 10 largest school districts, five will either start the new school year solely with online instruction or are recommending doing so.
Read more

For the first time in 54 years the celebrations are being held online due to the coronavirus pandemic.
Read more

Nursing homes have been struggling to protect their vulnerable residents from the coronavirus.
Read more

A Canadian court Wednesday scrapped the country’s asylum agreement with the U.S., saying the pact violated constitutional guarantees of life, liberty and security. “I conclude that the provisions enacting the (safe third country agreement)...
Read more

Pence told to be on standby to assume powers...

Tehran is waiting to see what President-elect Joe Biden does, while Iranian-backed militias in Iraq are continuing attacks against American interests.
Read more

The next OnePlus TV is even thinner than the...

State-run media in Zimbabwe say close to two dozen people have escaped from coronavirus quarantine centers, while others are illegally crossing the border from South Africa and not reporting to the centers
Read more

Spinning the performances of Biden and Trump involves an army of operatives targeting an array of audiences and platforms.
Read more

GOP coronavirus plan to include $1,200 stimulus check for...

A forthcoming Senate Republican coronavirus proposal will mirror a March stimulus bill that included a one-time $1,200 stimulus check for some Americans, according to a top negotiator.Treasury Secretary Steven Mnuc...
Read more

US stock futures dipped during after-hours trading Thursday, after ending the day in the green.
Read more

Can Heather Knight's side stop the Women in Blue reaching their first final? Here's how to watch an India vs England live stream, no matter where you are in the world.
Read more

Donald Trump's 73.6 Million Popular Votes Is Over 7 Million More Than...