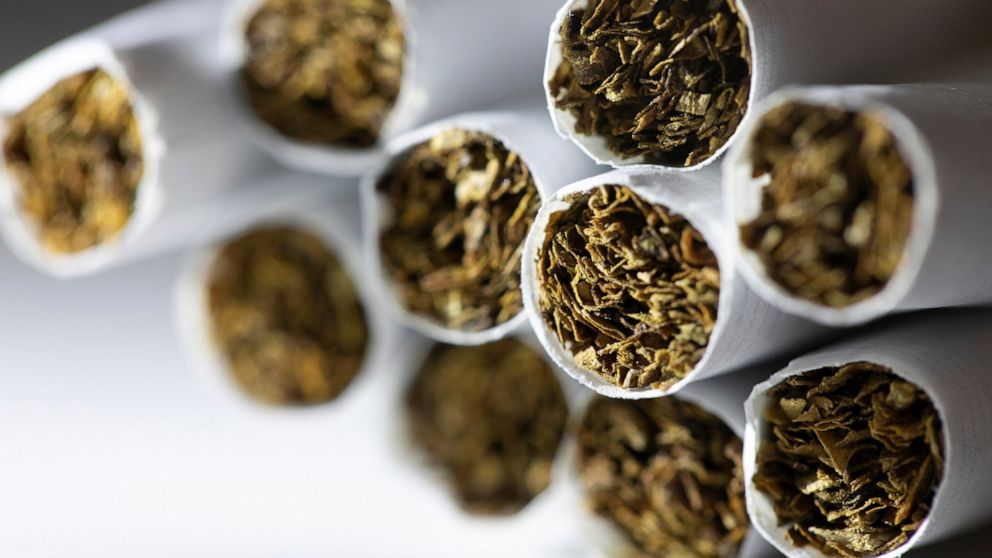 NEW YORK — The U.S. decline in cigarette smoking could be stalling while the adult vaping rate appears to be rising, according to a government report released Thursday.

About 14% of U.S adults were cigarette smokers last year, the third year in a row the annual survey found that rate. But health officials said a change in the methodology make it hard to compare that to the same 14% reported for 2017 and 2018.

The adult smoking rate last saw a substantial drop in 2017, when it fell from 16% the year before.

The new figures from the Centers for Disease Control and Prevention mean there are more than 34 million adult smokers in the U.S.

Meanwhile, about 4.5% of adults were counted as current e-cigarette users last year about 11 million people.

The CDC figures are based on responses from about 32,000 people.

Health officials have long called tobacco use the nation’s leading cause of preventable disease and death.

The Associated Press Health & Science Department receives support from the Howard Hughes Medical Institutes Department of Science Education. The AP is solely responsible for all content.

Police in Milwaukee have responded to an active shooting situation near the MillerCoors headquarters.
Read more

Travelers and homeowners alike have criticized the home-booking company for its response to the COVID-19 outbreak.
Read more

Bankrupt rental car company had warned that investors could lose their shirts in the unusual share offering.
Read more

Democrat Jaime Harrison raked in more than $22 million in the first two weeks of October for his campaign to unseat Sen. Lindsey Graham (R-S.C.), according to the candidates' latest filings with the Federal Election Commi...
Read more

Missouri carries out execution of Walter Barton amid coronavirus...

Barton maintained until the end that he was innocent of the murder that sent him to death row nearly three decades ago. KYTV's Frances Watson reports.
Read more

A group of just under three dozen Michigan city officials, including 16 police officers, tested positive this week for COVID-19 or displayed symptoms that required them quarantine.
Read more

Report sounds an alarm on ongoing decline of US...

A first of its kind assessment of the coral reefs in U.S. waters is sounding the alarm over the role of human activity and climate change in the decline of these sensitive ecosystems, which scientists deem essential to the health of the world’s oceans
Read more

President Trump on Tuesday rallied a crowd of largely mask-less student supporters in Phoenix, claiming Democrats were trying to keep the country “shut down” during the coronavirus pandemic in order to hurt the economy before the election.“They are...
Read more

Officials say breached levees have trapped more than 10,000 people in an eastern Chinese town as flooding worsens across much of the country
Read more

Stand-alone bill to provide relief for airlines blocked on...

House Transportation and Infrastructure Chairman Peter DeFazio (D-Ore.) attempted to pass a stand-alone bill that would give relief to airlines on the House floor Friday.The attempt was unsuccessful after the Oregon congressman was denied a...
Read more

After the pandemic hit and beer sales dropped, craft brewery Kiuchi found themselves with a spoiling stockpile of beer. The solution? To turn it into a long-lasting spirit without an expiry date.
Read more

George Floyd’s brother says destruction ‘not what he was...

Terrence Floyd in an interview on Monday said his older brother George Floyd would not have wanted people to engage in violent protest to remember him, and warned it risked overshadowing the peaceful protests agains...
Read more

5 Ways ‘The Bachelorette’ Clare Crawley and Jessica from...

President Trump on Friday commuted the sentence of longtime confidant Roger Stone after the former campaign adviser was sentenced to serve three years and four months in ...
Read more

Heavy rains have triggered the worst flooding in six decades in China, displacing millions and straining the Three Gorges Dam. WSJ’s Jonathan Cheng explains how the natural disaster is hampering the country’s efforts to restart an economy already battered by …
Read more

His campaign later clarified that there have been several racist presidents, while Trump claimed to have done more for Black Americans than anyone.
Read more

Fox News Radio's Guy Benson gave a fiery monologue over a report that a California man of Mexican-American descent was fired for allegedly making a racist hand gesture. Emmanuel Cafferty, The man accused of making the Gesture said he was simply cracking his k…
Read more

The Commerce Department unveiled sanctions against 11 Chinese companies on Monday over concerns that the firms were assisting China's government with oppression of Uighur minorities in the northwestern Xinjiang province....
Read more

My Sister, Lisa Montgomery, Took a Life. Her Own Was Scarred by...